Frank Zappa was by far one of the most interesting, diverse and prolific musical artists of the Twentieth Century. Between 1966 and his death in 1993 this musical iconoclast recorded more than 100 albums in styles that varied from avantgarde rock to freeform jazz to classical and all points in between, at all times thumbing his nose at almost any form of conventionality and commerciality – unless it was to ridicule or satirise it.

He left behind a discography so vast and eclectic that newcomers exploring his catalogue for the first time often find themselves either lost in a sea of weird-sounding albums full of tape-loops and strange guitar noises, or falling back on his better-known comedic tunes like ‘Valley Girl’ or ‘Bobby Brown’.

For just over a decade, Zappa’s oldest son Dweezil has been presenting his father’s work to audiences worldwide with his touring band Zappa Plays Zappa and, more recently due to legal constrictions, under his own name. As someone more intimately close to Frank Zappa’s music than most people, he is acutely aware of the difficulties audiences may have with it.

“Sometimes people might start with a record that’s a little weird for them,” he says cheerfully. “For example, for some people their first record was Burnt Weeny Sandwich, and for people who really got into that record it was really easy to get into all the other stuff. But some people might hear that record and say, I don’t know, this is not for me. With over 100 albums in circulation, it’s hard to choose which ones would be right to check out for the first time, so you do need a bit of a guideline to help you ease into it.”

Dweezil’s show has been that part of that guideline. A proficient guitarist since a very young age, his playing has featured on dozens of recordings since, including his own solo albums and those of his father and siblings. In 2006 he created Zappa Plays Zappa, a touring tribute act to Frank’s genius that has occasionally featured members of the Mothers of Invention in its ranks. His current tour began in 2016 as the celebration of the 50th anniversary of the release of Frank Zappa’s first album Freak Out! and rolls into Australia in February.

As a musician first and foremost, Dweezil explains that his emphasis has always been on the musical aspects of Frank’s work, a facet that tends to be sometimes forgotten in place of the satire and humour.

“If you’ve only ever heard ‘Don’t Eat the Yellow Snow’ or ‘Cosmik Debris’”, he says, “you might think all the songs have a comedic narrative and that he’s almost more of a novelty song guy. If that’s the only thing that’s getting on the radio, that gives the impression of what his music is, but he really did so much more and people weren’t aware of that.”

A highly regarded guitar player, Frank Zappa was also a composer of classical music and film soundtracks. Some of his earliest work, long before he came to fame, was influenced by early 20th Century classical composers. And while he continues to be acclaimed as a satirist, there is, as Dweezil points out, far more to his father’s vast output than novelty songs.

“What was most important to me was to present what I thought was what was the most overlooked about his music, and that was really what he did as a composer, as an arranger and as a guitar player. So the first thing I did was I de-emphasized all the humour elements, because the stuff that got onto the radio was usually the comedy music and that misrepresents the man and his music. I wanted to emphasise his work as a composer, bandleader, arranger, guitarist… so the material I chose, and continue to choose in the show really reflects that stuff more than any of the humour.”

It wouldn’t be a Zappa show without the humour though, but Dweezil wants to ensure that his father’s legacy is remembered as a whole. Australian audiences can expect a fully immersive Zappa experience when he arrives here.

“We do incorporate some of (the humour)”, he promises, “but it has been more important for me to make it so that this band that I have is able to play the classical stuff, any of the other styles within the music, and to do it with authority and do it well. So it’s always been important to really focus on the musical side of things and bring out the detail of the compositions.” 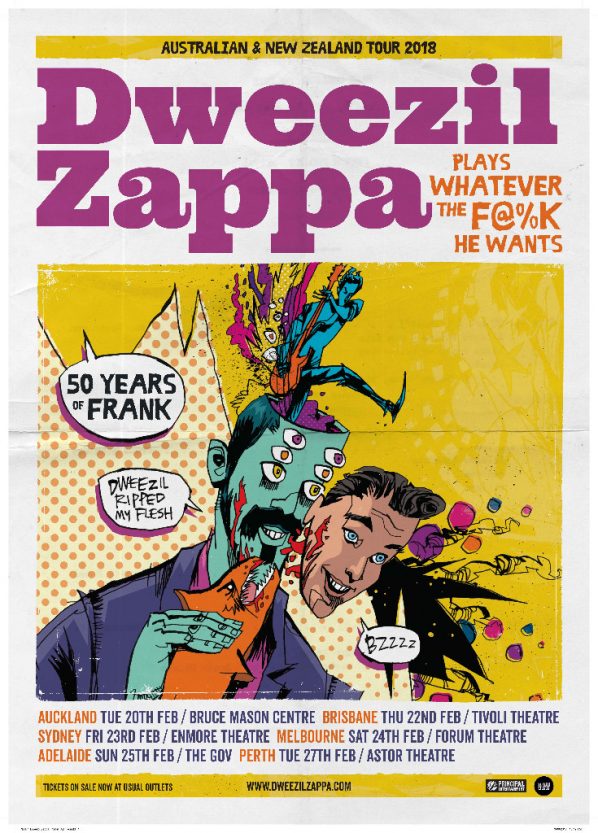