Enslaved have managed to be ahead of the pack while retaining their appreciation for black metal alongside progressive metal. They are so well established that after their 25th anniversary tour it was almost a case of job done. However, their inspiration and drive led to their fourteenth album titled simply as E, with artwork representing runes of lore stemming from Norse mythology. Of late, their music has matured into a musical representation of the complexities of nature and soon, Australian audiences will experience the depth of their music which continues to evolve. Loud Online battled with the recalcitrant Skype gods to bring forth enlightenment from bassist and front man Kjetil Tvedte Grutle aka Grutle Kjellson.

You’re touring here again very soon in support of the most recent album E, which is somewhat complex musically. Did it involve a large amount of pre-production?

Quite a lot, actually. First we will make a demo with programmed drums and individually get stuck into it and start working on different kinds of arrangements. After that, we will meet and then do some more demos. So, I want to say that seventy five percent is pretty much ready before we enter the studio, especially with guitars, drums and bass. The rest is more open to new additions, so to speak. The improvising bit is mostly around the vocals and on the keyboard parts. The rest is pretty much set prior to the recordings.

I didn’t expect to hear saxophone being prevalent on a track [‘Hiindsiight’] on an extreme metal album.

You didn’t? Well, ha ha. That song is one that we wrote back in 2008. It was one of those songs in part of a collaboration with a jazz band called Shining. In the original version back in 2008, we had saxophone on it and we decided that it would be strange to not have the saxophone on the song when we brought it back. It wasn’t the same guy playing it but still, we felt that the song needed that instrument as well. I think it works, yeah, it works.

It clearly has that black metal styled scooped EQ sound, especially with the guitars but yet there is progressive experimentation happening.

The funny thing about that song is that the least experimental thing about it was adding the saxophone to it because that was the natural thing for us to do in the making process. So, I will say that it was probably the most logical step on the album to add saxophone.

Will there be a good chunk of the new album’s songs in the set list you’ll be touring to Australia?

The set list is not ready yet for that our so we will have to see. The songs are pretty long. The album is over one hour of music with six songs. Let’s put it this way, there would be at least twenty five minutes worth of new material in the set list. We will then try to blend in as much material as possible from our whole career. We will try to make a nice blend of songs that makes sense with both old school and more recent material. Of course, it is crucial that the old songs fit together with the new ones on the set list. It is not ready just yet but it will be very soon. We have some festivals to do first with a different set list. We will make a nice set list for the Australian tour. Definitely don’t worry about that.

You’ve also got Sólstafir from Iceland coming with you on this tour as well.

Yeah, we’ve played them a number of times. The last time we played with them was just recently at Wacken Open Air in Germany. We’ve played with them in Brazil last year. The first time I saw those guys was when I was having a vacation in 1995 in Reykjavík in Iceland. Some very young kids suddenly knocked on my hotel door and they were the Sólstafir guys. So I have known them for quite some time now; twenty three years. They are cool guys and always have been.

The album has many interesting sounds on it. For a song like ‘Feathers of Eloh’ there are plenty of different sounds. What is your approach to instrumentation?

Yeah, it was pretty amazing. We got a new keyboard player, Håkon Vinje, and for the first the time we have actually took advantage of having a keyboard player in the band. There is a lot more of a seventies hard rock vibe to the keyboard playing than there has ever been. It was like a vitamin injection into the Enslaved sound. Yeah, I am really, really happy with the way his keyboards sound and the way that they blend in. We were really satisfied with the recordings and you know, line-up changes usually bring a different energy into the band. It created different dynamics but it was really full blown this time and yeah, that was excellent. It was a great experience recording this album.

Speaking of keyboards, is that a Hammond B3 organ on the song ‘Sacred Horse’?

Nice. You won’t be bringing that on the road though.

No but we will be using a pretty good simulator which is just a practical thing to use live. It is going to sound almost like a Hammond.

You mentioned personnel changes. Aside from your old keyboard player, Herbrand Larsen moving on, your long serving drummer Cato Bekkevold has left but your producer Iver Sandøy has now joined the band.

Yeah, he is our co-producer and sound engineer. He has stepped in for us before. Last year he did three or four shows when Cato’s wife was giving birth to their daughter. He has been stepping in for Cato four, five or more times over the years. It was a very soft transition. It was the least dramatic line-up change in the history of Line-up changes. It has just been really, really easy and we started rehearsing with him long before Cato quit, just to make him ready. They were overlapping each other during the end of Cato’s career within Enslaved. Actually, for the last show Cato played with us, he actually performed as a session drummer because Iver was already in the band but prior to joining us; he had a booking with one of his old projects. So, Cato had to step in for him meaning that Cato ended up being a session drummer in Enslaved. How good is that? Haha.

Your influences are wide and varied with artists from Rush to Dark Throne and Bathory impacting on your music. Is there any influence from artists such as Emperor, Satyricon or even Opeth?

No, I wouldn’t say that. I guess our influences started before those bands. I mean, Satyricon are a younger band than us. Let’s say that Opeth have been inspiring in some sort of way because of what they have gained. We haven’t been listening that much to their actual music, apart from seeing them live on tours that we have done together. They are an amazing band, obviously but we are listening to a lot of the same bands as Opeth, I would say. We draw our inspirations from the same sources to some extent. That being the seventies, mainly.

How have you looked after your voice with all of the touring?

I try to do a least an hour of warm up exercises before a show, especially on tour when we have maybe five or six shows in a row. Of course, the most crucial part is to stay hydrated so drink loads of water. If you are dehydrated then you are pretty much fucked because then your whole system dries up and the throat is one of the first areas of the body that experiences the most negative effect from dehydration. So, warm up and stay hydrated plus try not to get pissed drunk on booze every night. That is pretty good advice.

Enslaved’s back catalogue is impressive and was well celebrated with the recent 25th anniversary tour. Is there anything of that collection of albums that particularly stands out as being a definitive album for you?

Yeah, there are several, of course. Let’s say, the mini EP of Hordanes Land from 1993 will always be the most special since that was the first one. Also, the first full length album we did, Vikingligr Veldi, was very special to us. Below the Lights initially was a huge album for us because that was the start of a new era for us with line-up changes and so on. It was a new, fresh start so that is still a big milestone for us. Isa received the first Norwegian Grammy award so that was also very special. I would say that the latest album, E, with yet more line-up changes is something we are really proud of and we also won a Grammy for that one. That was really cool. Most of them feel special to me but I will rate some of them over the others, obviously. It will always be like that because there have now been so many albums. I have to admit that I don’t like every single one of them equally; of course not. I am proud of all of them but I put some of the albums above others.

You did a guest spot on Dark Throne’s 2006 Too Old, Too Cold EP for the song ‘High on Cold War’. How did that come about?

Oh, we have been friends with Dark Throne for a long time and Ted Skjellum aka Nocturno Culto had done some vocals for us on the Isa album. He did background vocals on the ‘Isa’ song and on the ‘Bounded by Allegiance’ song. He wanted something in return so he invited me up to the place where he lived back then so I drove up, we did some hiking, we did some fishing and we did some vocals, as friends do, you know. 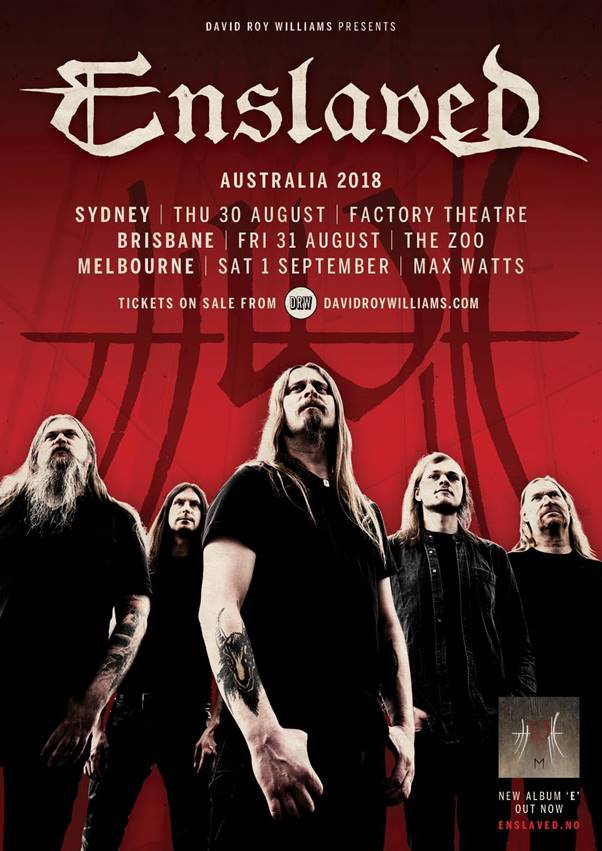