For a brief time in the 1980s, Joey Tempest was one of the biggest rock stars in the world. Despite that, or perhaps because he is so aware of the flickering flame of fame, the Europe frontman is charming and humble on the phone ahead of the band’s first ever Australian tour. His faintly Swedish accent is infiltrated by lilts of English and Irish, betraying the time he has spent living there since the days his band were the hottest thing on MTV. In the right place at the right time, they went from obscure Swedish rock band to global pop superstars.

“We got signed to America in 84, I went to see CBS in 84,” Tempest says in a pleasant, quiet speaking voice. “Bon Jovi at the time were at another company. It was just that time, coming out of the 70s, into the 80s, writing songs and wanting to be like our heroes, wanting to take it further… We were one of the bands and it was an interesting time, definitely.”

In 1986, the band’s third album The Final Countdown became a worldwide smash, propelled into the stratosphere by the title track. Driven by a synth hook written a few years before by Tempest, ‘The Final Countdown’ went to #1 in 25 countries to be one of the biggest hit singles of the decade and one of the most enduring pop songs of all time. It was such an enormous hit that it eclipsed the rest of the band’s catalogue – both before and directly after it – to the point of obscurity, leaving many to believe that Europe were nothing more than just another one-hit wonder poodle-haired pop-rock sensation. In his understated fashion, Tempest says that people are finally coming to realise there was more to his band than one song.

“We did a show at the Sweden Rock Festival in 2013 where we played for two and a half hours and it was sort of an anniversary thing,” Tempest explains, “and we got to realise how many of our others songs our fans really like. There are so many other songs that have grown now and get the respect they deserve. It just took a bit of time for people to realise that we have a catalogue!”

The massive success of ‘The Final Countdown’ pushed the Swedish rockers into “a pop world where we didn’t feel that comfortable really,” the singer admits. Unhappy with the band’s musical direction, founding guitarist John Norum departed; six years later, burned out by success and constant touring, Europe folded. In the years since their reformation in 2003, their repertoire, now eleven albums deep, has developed a new appreciation.

“We feel more comfortable in the rock community and we do rock albums. It was amazing. It opened so many doors, ‘The Final Countdown’,” Tempest says. “There are people who just listen to the radio, as you know. There are people who are not interested in musicianship or guitar solos or whatever and they can listen to The Final Countdown album and really enjoy that – which is cool! But we grew up with Deep Purple and Zeppelin and UFO and other musicians and we love album-oriented rock albums, and now that we’ve done eleven albums people in the rock music world know what we’re about. It’s ok, ‘The Final Countdown’. It’s still a cool, interesting song. We love playing it live.” He laughs: “We don’t have to rehearse it!”

Since those halcyon days, Europe’s approach has been truer to their original vision, mixing a modern heavy rock style with gritty blues elements and doffing the hat to major influences like UFO and Thin Lizzy. Their albums continue to consistently peak on the Swedish charts and perform well in other European countries. Last year’s effort Walk the Earth was also very well received critically.

“A few of the guys in the band feel like it’s our best album,” Tempest says. We got a Grammy for it in Sweden and the best rating for it in Classic Rock magazine.”

That review suggested it was the band’s best album since their reformation. Walk the Earth also features “Pictures”, a song with lyrics suggesting a continuation of the story told in their biggest hit. It was an idea developed by Tempest and album producer Dave Cobb.

“The song felt a bit like it was travelling-through-space kind of song, so we felt it could be the continuance of the story of these people leaving Earth, and one the guys has gone off by himself – maybe he’s the only one left! I don’t know. He’s facing his destiny in the song. It’s kind of abstract, but that was the idea.”

32 years on from their breakthrough smash, Walk the Earth finally brings Europe to Australia at last. For all the globetrotting the band has done, Australia remains on the list of places they’ve never been to, not even as individuals outside of the band. The singer blames Europe’s management for them not visiting during their commercial zenith – “Something was planned in the later part of the 80s but it never materialised. We can’t remember in the band, but our first management may have had something to do with it.”

“We’re very excited,” he continues. “We’ve just done a couple of shows in South America and the crew and the band are talking about excited we about coming to Australia, because none of us have even privately ever been to Australia for holidays or anything. So this is a really big thing for us, because to meet our friends and fans there and play our songs there for the first time, it’s really special. Because we’ve been around the globe quite a lot, it is special and we’ve been talking about it for many years. It will be the highlight of the year, to tour Australia.”

To that end, Joey Tempest promises a very special set from Europe when they touch down here at last in May. As one of the places never to have experienced the high energy rock power the five piece bring to the stage, the singer wants to assure their fans that the wait has been worth it.

“The great thing would be to mix it up and play some older stuff that we may not play all the time, and play the new songs that have gained some traction and are becoming a bit popular with the fans these days. When you’re coming to a place for the first time, I think it’s important for the audience to feel the band a bit, our own favourites and those of the fans. An explosive show with plenty of the old and new. Maybe some features – a guitar feature, a keyboard feature, do something with the drums, try to do something a little out of the ordinary.” 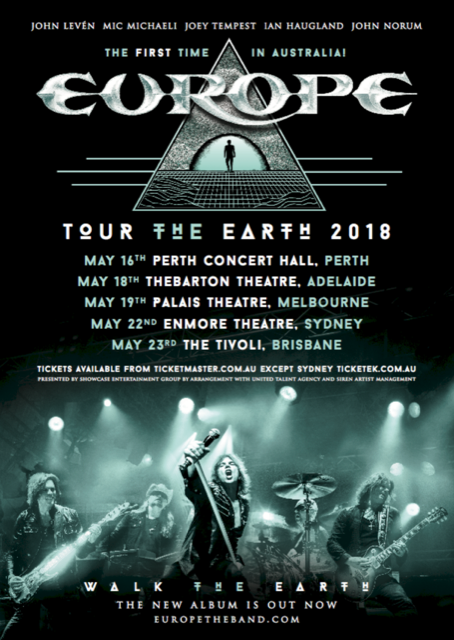