Life on the road is tough. It’s a grind, a test of endurance and a constant attrition that wears people down. Frankenbok know all about it. For twenty years the Melbourne metal campaigners have crisscrossed the country and played countless gigs. They have also shed plenty of members along the way. During 2015, Frankenbok’s longest-lasting line-up disintegrated, first with the departure of vocalist Dan McDougall and guitarist Nathan ‘Yeti’ Amatnieks and later long-serving drummer Mick Morley. Original road dog Aaron ‘Azza Bok’ Butler has seen three vocalists come and go now, and he’s philosophical about the latest changes.

“It’s very, very rare for a band to be together and not to have changed almost all the members at some stage,” he says. “And I just put that down to people’s lives changing. For some people it changes not just their lifestyle but what their wants and needs are in life. If they start having different interests or places where they want to dedicate their time or maybe after a while they don’t get the same out of it that they did.”

For his own part, he suggests with a laugh that he must be a “fucking idiot” to be still trying to make a go of this music thing. Looking deeper though, he does have a theory about why some people stick it out.

“I think some people choose to do it or it’s like some cheesy movie where you’re chosen to do it. There are times when I don’t want to do it,” he stresses. “You consider not doing and then reality kicks in and you think, ‘How long would I last not doing it?’ And it’s something that I definitely feel a primal need to do. It’s part of who I am and who I’ve been since I was a teenager.”

“This is going to sound cheesy,” the guitarist continues, “but some people need to write, some people need to rock… Some people have a crack at it for a while and then don’t have anything to do with it after a while. Guys I’ve been in bands with, that was their period of being in a band in their life and now they don’t even have so much as an acoustic guitar. They’ve got their lives together and have a nice car and a nice house, and I’m still doing this. And I don’t know who’s happier. Me probably!”

Vicious, Lawless is the eighth Frankenbok release and the first to feature the band’s new personnel, one-time House of Thumbs drummer Tom Rossell, guitarist Reiki Barbosa and ex-Scar the Surface vocalist Daniel White. It’s a raw, live sounding album of power, grooves and aggression that Azza is extremely proud of, putting it at the head of the list of his favourite Frankenbok albums.

“This is something that all bands say, but I mean it: it’s our best. I know it’s so new and everything, but it’s my favourite. With the other records, by the time you’re done writing the songs, recording the songs, mixing and mastering and all of that stuff, you kind of don’t want to hear it that much. It just loses its energy for you, you’ve made yourself sick with it. I don’t know what it is about this one, but every time I put it on, I still enjoy it. I’ll even just put it on to reference a part of a song and it’s just easy to listen to it all the way through. I just gives me that fired up, ‘Metal! Fuck Yeah!’ thing, which I don’t think the others did by the time they were finished.”

The key lies in the recording process the band used this time. Handing recording duties to a guy very familiar with their style – former vocalist McDougall – helped ensure they would get the sound they were after in the studio. Cutting back on everything except their own blood, sweat and gristle was also a factor. Frankenbok made the decision to release it the way it came through the desk, without going back to fix very much, which accounts for the delicious energy that flows across this release.

“It was totally real,” Azza maintains. “It was the first time we’ve got this band to sound like this band. We’ve come close before, but it’s always been somebody else’s interpretation of what this band should sound like. This was recorded by Dan McDougall. He tracked everything and put it all in its place. When Reiki our new guitarist joined, we already had it at a place I was really happy with, and he came in and said, ‘Let me have a crack at it’ and he mixed it on top of that and it sounded just like it does in the jam room, just real good quality! It sounds human. We didn’t doctor. We just went, let’s keep this completely human and keep the computer out of it. There’s a couple of places in there where there’s flubs, and I’ve left them in there because that’s me. So when you go and see the band live, that’s what you’re gonna get.”

The personnel turmoil conspired to keep this usually constantly touring band off the road for most of the last couple of years but in 2017 Frankenbok has made a concerted effort to re-establish their live credentials. Most recently, they hitched their wagon alongside Dreadnaught on the Raise Hell tour headlined by Superheist. All founded in the 90s, the bands have a long history of working together.

“[Superheist’s] DW Norton is a guy who had a hand in making Frankenbok a band that was known,” Azza explains. “He started a label within a label to get our stuff up and give us a leg-up and then we hooked up with Roadrunner for a while in the early days and Dreadnaught were labelmates and we did a couple of months on the road together. Since then they’ve been our brothers in arms.”

Frankenbok was an altogether different beast in those early days, an amalgam of styles and disparate influences from across the spectrum. Azza admits that at the time, the band was set on defying the rules that had built up around metal music and in many ways they did exactly that, releasing novelty covers and throwing arrays of strange noises and sounds into an eclectic musical mix. While Frankenbok have long since settled into a more direct style, Azza contends that it isn’t too far removed from what it was like back then.

“It’s definitely a different animal to what it was, but the fur is the same colour. It’s not as quirky. We used to have dog sounds and pig sounds and all kinds of crazy samples and ‘Don’t Call Me Baby’ and an attitude of, ‘Let’s do to metal what we totally shouldn’t be doing’. Be stupid and be colourful and be fun because metal has become, rather than a rebellion thing, it has too many rules to follow. We went, ‘Fuck all that’. Kind of on purpose, we did what you’re not supposed to do.”

The shape and the sound of Frankenbok may have changed over twenty years, but the band’s attitude and self-determination has not.

“We’re five desperate men playing desperate music and there’s not a lot of conformity going on there,” Azza declares. “We do what we wanna do. It’s not like we’ve got millions and millions of fans we’re gonna disappoint and we’ll have to sell the beach house. If you’re not doing what you wanna do the way you wanna do it, you might as well not do it.” 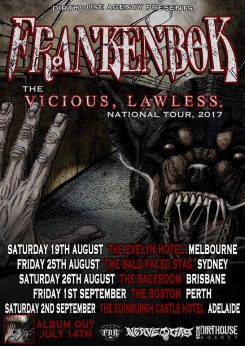