Frenzal Rhomb: At the Heart of Winter

Home > Features > Frenzal Rhomb: At the Heart of Winter

The Dead of Winter Festival is Brisbane’s celebration of all that is dark, fast and heavy in the counter-culture world and this year’s event stretches itself across the Tivoli Theatre and the Jubilee Hotel as more than 40 bands explode across the stage. Along with top draws like Polaris and Ocean Grove, reformed local legends Pangaea and a string of metal bands, 2018’s edition also features the most amount of punk bands ever assembled at the event, headed up by home-grown luminaries Frenzal Rhomb who top the bill.

Frontman Jay Whalley might scoff at his band being described as “luminaries”, but after two and a half decades of iconoclastic punk rock mischief it appears that they may be finally getting some real recognition.

“The last album [Hi-Viz High Tea] was rather well received – in certain circles,” he says in his famously non-plussed deadpan voice that really is his actual way of speaking. “We were nominated for an ARIA Award. That’s all that matters to my uncle Roger, because that’s the only thing he really knows about music. There’s no punk rock award, so we were in the Hard Rock/Heavy Metal category, but that’s ok. It’s good to get that recognition from our peers, even if we don’t know who they are.”

Certainly people who grew up listening to the likes of Not So Tough Now, A Man’s Not a Camel and Dick Sandwich are now old enough to be in positions of sufficient influence that those recordings are being given kudos in the types of mainstream publications that either ignored them or dismissed them as juvenile in the 90s.

There’s also little doubt that the band remains popular, with their last year or so of touring taking them to many places they had previously never played: “We played in Ulladulla,” says Whalley, “we played in Montreal – which is like the Ulladulla of Canada, but more French.”

Frenzal Rhomb is one of the few bands to emerge from the mid-90s alternative music scene that has been more-or-less continually active ever since. The singer says that their ongoing popularity is part of what keeps them going.

“There’s still reason to do it,” he says. “We enjoy each others’ company, although that said, I kicked everyone else out of the band. But this line-up of Frenzal Rhomb has been together for 17 years now, which is longer than the period the band was together before that multiple times over!”

Despite bandmate Lindsay McDougall once remarking that “the laziness of Frenzal Rhomb extends to hitherto unknown standards of laziness for a rock n roll band”, the Dead of Winter festival will be a busy day for their laconic vocalist, who is also stepping out on bass alongside his wife in psychedelic metal band The Neptune Power Federation and with 90s touring partners and drinking buddies Nancy Vandal.

“We’ve played together again a couple of times,” Whalley says of his role in Nancy Vandal (most recently for the 20th anniversary of The Debriefing Room), “but I think they’ve finally realised that their best album was the one I played bass on. That’s what it is, really. It’s all about the bass playing.”

No doubt Jay’s appearance in no less than three bands on the bill will be a treat for fans of the man and his music. But Dead of Winter also has a delicious variety of other attractions, from metalcore up-and-comers Polaris to visiting tribal-metalers Alien Weaponry, thrashers Desecrator and Harlott, black n’ rollers Pagan, sludge lords Black Rheno and Lo!, hardcore heavy hitters Clowns, rum-obsessed pirate metal band Lagerstein, McDougall’s Bad Religion cover band Dad Religion and acid rockers Radio Moscow among them.

“It’s going to be a day,” Jay Whalley rightfully asserts. “I’m keen to check out Ocean Grove, because I watched one of their videos and they seemed to have this nu-metal vibe going, which I thought was something that was long gone. But they probably think the same about my band – ‘Why are you still playing this 90s punk shit?’” 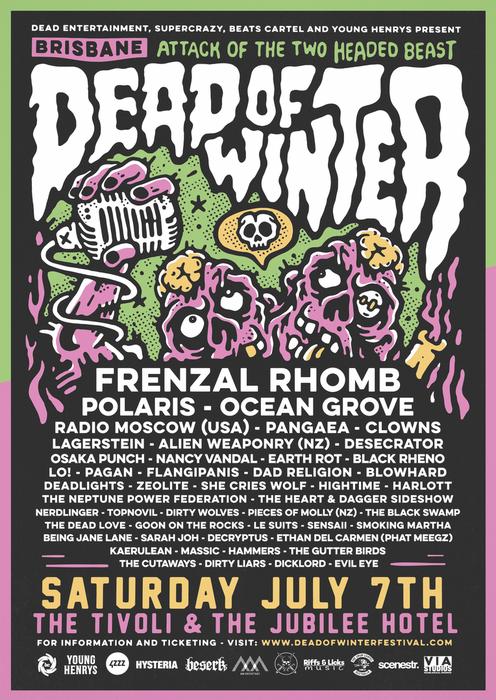