Fuel hit the big time in 1998 when their debut Sunburn notched up one millions sales within two years of release. Subsequent albums offered further quality songs. Tour-hardened and enduring the usual music industry machinations took a toll on the band. In 2006 front man Brett Scallions left after three solid albums and after a fourth, the band splintered in 2010 with remaining original members departing as a reformed version of the band effectively reinstated Scallions with a new, malleable line up. Now, after many years since Fuel were last in Australia, the reformed version of the band are back here on tour  in celebration of the 20th anniversary of the classic Sunburn album. Loud Online spoke to the durable and enthused Scallions via phone shortly before he made his way down to Australia for the current tour.

Looking at the album that you’re celebrating, the industry has clearly changed massively since then. Does that period have a certain nostalgic quality or sense of innocence for you?

Ah, yeah but it wasn’t our initial plan either to be part of a nostalgia like this. At the time we were just trying to make a great record. But it has been crazy to think that it has been twenty years since we made that record. We had to sit for a while and think since times have changed or are a very different, I should say.

One of the interesting things is that in the nineties there were stacks of one-hit wonders. Obviously, Fuel proved otherwise with successive good albums and relentless touring. How do you look at the album amongst all the things going on back then?

It was definitely years in the making. We worked on that record for a long time and we recorded those songs numerous times. Certainly, in the States we were never a one hit wonder and in Australia we had a string of hits off that album. So it certainly worked out more than being a one hit wonder thing for us.

What I mean is that at the time so many bands were popping up and I guess it was the industry just pushing things out there to see what stuck.

Yeah, you know what, back then, for as long as I can remember labels have been seeing what stuck to the wall. So, there were definitely times where they just saw what would sell to make some money. I don’t think that was necessarily the case for us because we had a lot of heart and passion behind us within both the record label and within the band. It was not necessarily about the money and the stardom or the fame. It was just about making great music and putting out great records.

Before you returned to the band, had the live versions of recorded songs changed much at all?

I think live we have always been just a more aggressive band. In a live atmosphere it has always been a lot more raw and dirty, it was not so analysed. That’s what I love about playing live; you can do whatever you want and also get away with whatever you want, practically, you know, but I just love the freedom of it being four musicians on stage just going for it together. You don’t have that time to be able to analyse parts to decide on what is best and what is not best.

Other than you, the original members have moved on to do other things. Can you talk about the current line up for the tour?

Oh yeah man, I’ve always been so lucky to have the people around me that I have played with so I always have incredible musicians around me. So, for this run with me I’ve got Jason Womack [lead guitar, backing vocals] and I have known a lot of these guys from other projects from just living here in Los Angeles. For example, Shannon Boone [drums] played with Puddle of Mudd for years. Actually my bass player [Phil Buckman] who has been playing with me for the past few years has had knee surgery. His doctors told him, ‘if you get on an airplane, you could potentially die from blood clots’, so he had to bow out from doing the tour. So, I had my brother in law going on this tour to play bass with me and he’s an amazing musician so it is going to be a tonne of fun to be able to do that with them. I get to play with them from time to time and it is always a lot of fun.

I believe that for recording the album Sunburn, you had Jonathan Mover on the drums as opposed to Kevin Miller. Jonathan Mover had played with Joe Satriani well before your debut album so his drum contribution must have been substantial. Given you’ve played with so many people, starting out a major label release with him on drums is pretty good.

Right, that was a major eye opener for me. It dawned as, ‘Oh, that is what a great drummer is supposed to be like,’ you know. Before then I hadn’t played with a terrible lot of drummers and our original drummer of the band Fuel was really good but I had no idea what a truly amazing drummer can feel like until I played with Jonathan Mover. It was like, ‘Okay, now that is what it is supposed to be’. So, ah, I love the guy.

Does that infer that Shannon needs to replicate Jonathan’s drum parts?

No, never man, no way. A lot of the time when it comes to recording, there are certain aspects that are very important from a live standpoint and you have to replicate those live but at the same time, there are lots of holes between those important parts where it is just fun to show your own personality in the songs and to be yourself. I always tell the guys in the band to pick the important parts out of the songs but in between those parts, be yourself and have fun.

What can fans expect from the format of the live show?

Well, it is the twentieth anniversary of the Sunburn album so the plan itself is to play that album. We’ll also play some songs off of later albums too that amounts to a choice selection of hit songs. It is going to be a lot of fun and we’re going to play as long as we possibly can and have a great time.

Do you have change your style of rhythm guitar playing so you can sing at the same time?

I have been playing guitar and singing for so long that I can easily split my brain in two and do both at the same time without even thinking about it, for the most part. Sometimes there are other non-Fuel songs that are kind if difficult for me to do but at the same time it is just a matter of practice and repetition. That’s all it is.

The lyrics on Sunburn had some revealing lyrics that Carl Bell [ex lead guitar] wrote for songs like ‘Jesus or a Gun’ and ‘Shimmer’. How do you look at those lyrics now given you’ve since had kids and become a more responsible adult and so on?

Yeah, one thing about lyrics is that they are there for you to interpret in your own way, you know. Carl wrote some great ones back in the day, no doubt. I haven’t thought about the lyrics and tried to incorporate them into what they talk about and what they were back then versus what they are in my life now. So, I have to do that, I think.

You’re throwing in songs from other albums and you’ve got a sixth album on the way soon. How would you say they sit alongside Sunburn?

I think that all songs and albums are their own thing.  It is very rare that you have a set of twins in an album; you understand what I mean by that? The songs might sound somewhat similar but they are not the same by any means. You can never truly write the same song twice and nor would I want to, you know, so every song is kind of different in its own way. Then you just try to make a rollercoaster ride out of it when it comes to the album itself with song placement and things like that.

Are you self-producing your music nowadays?

Right now, I’m working solely on my own in a studio in my house where I can sit down and flesh through song ideas. Once I am ready, I toss them around to other people in the organisation between my band mates or any producer friends that I may have and people like that to try to get guidelines and opinions.

Some of your songs, ended up on soundtracks and so on. Did that help in hindsight? Is it worth pursuing that option?

I know that is absolutely helps when you get budgets and things like that. But, when it is regarding sales and so on, which I think is what you mean, yeah, it totally helps because you never know. We did a song for the film Daredevil and there were a lot of people who were fans of Daredevil who maybe didn’t know who Fuel was so that helps. The first time we ever did a soundtrack was for Godzilla and we were basically a brand new band. So being on that one was a big advantage for us because we were with the likes of Rage Against the Machine so it really helped out.

Are you finding your new music to be more aggressive given the state of the world?

Honestly, I am in a good spot mentally so it is kind of hard to write angry, aggressive music when you’re happy. I just write about anything that comes to my mind but these days it is not too angry or aggressive or anything like that, it is just a case of trying to write good melodies and content.

How do you look after your voice when touring?

Rest and lots of water. Warm up exercises both physically and mentally plus try not to be too abusive on things like beer.

Indeed. Finally, over the years, did Fuel get into the vinyl releases angle at all?

As far as I know, every Fuel album that I have been a part of was released in a vinyl format. I always made sure of that. So yeah, there is Sunburn, Something Like Human, Natural Selection as well as Puppet Strings all on vinyl. It is the best and only way [to appreciate recorded music], I grew up on vinyl and I’m a product of the seventies so my first taste for music was on vinyl. 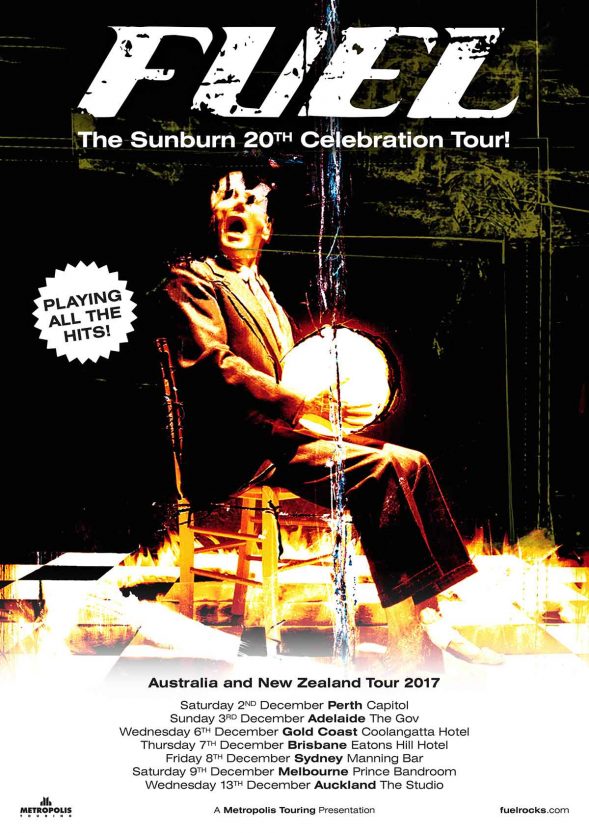