Gilby Clarke is in the studio working on his latest solo album when he gets the call. The affable guitarist offers an apology before he puts me on hold, only to come back after the briefest of  moments.

“I’ve pretty much finished the recording process and I’m at the mixing stage right now, tweaking and getting it together,” he explains. “I don’t have a release date yet, but I’m very happy where I’m at with this. It’s a good rock n roll record; whether it’s fashionable to be rock n roll now, I don’t know, but I know it sounds good and the guitars are loud.”

Clarke hasn’t done a solo release since 2003. He says he doesn’t know “how or why that many years have slipped by”, but he’s hardly been idle during that time, touring his own band and working as a producer and guitarist for a list of acts that include Heart and the Rock Star Supernova project with Tommy Lee and Jason Newsted, and Kings of Chaos, the Matt Sorum-instigated heavy rock collective that appeared here as part of 2013’s Stonefest.

“I got into a creative groove,” Clarke says. “It has good loud guitars, the songs are catchy, they feel good and they have different rhythms on them, there’s a point to it. As a musician I think I’m growing. I think I’m a better singer, a better songwriter, a better guitar player, and I think these things are showing up on this record.”

To the unassuming and quietly-spoken guitarist, who rose to prominence with a three-year stint in Guns N Roses, growth as a musician and the strength of the song are the two most important aspects of a musical career.

“I’m a firm believer that a good song is a good song, no matter what. A good example of that is ‘Imagine’, by John Lennon. You can play that song on harmonica, piano, acoustic guitar or violin, and it’s a great song. And that’s always been my goal, to write songs and play guitar and try to get one of those songs and I think that drive keeps some of us artists alive: We gotta get it! We gotta get it! We’ve only got 80 years, so we gotta get it!”

He’s somewhat critical of the way writing music appears to have changed in the decades since first started listening to it.

“When I first started listening to music in the early to mid 70s, music was so much more organic,” he says. “Now it’s grown… there are formulas to writing hit songs now. They know what a teenage girl wants to hear and stuff. Songs are a great thing. If you listen to a Beyonce song – is that even a song? I don’t know if you could sit down at a piano and play that. I’m not saying that modern music has changed to be good, bad or ugly, but there’s still a lot of people out there who just want to hear a good song.”

As for growth as an artist, Clarke is also keen to point out that there are probably more than a few performers that don’t evolve and develop. Some become shuttered from serious criticism, something that he sees as a vital ingredient for the artistic process and one that he has always accepted.

“I think there’s some artists that don’t grow. Especially in the popular world when there are so many people around you that are telling you that everything’s great, that every part is great. There’s no criticism,” he says. “You grow from criticism. As we know from life in general, you learn from your mistakes. It’s the same thing in music. If you can take a little criticism, and listen, you can grow from that. I always have. Whether I agree with it or not is another point, but the fact that you can hear it is really important.”

So how does Gilby Clarke react to criticism?

“You ask, Are they right? Is it possible? Whatever the criticism is: are you being generic or not growing or whatever, listen to it. If it comes with a kernel of truth, I got no problem with it. Everybody’s got a frigging opinion,” he concedes with a chuckle, “whether it’s good, bad or ugly. Whether I agree with it or not – if I agree with it, I can grow from it. If I don’t, I just think, ‘He’s full of shit.’  I can take on board criticism. I always have done.”

He’s also proud of the fact that he’s been able to maintain his own identity throughout his career. From the moment he was swept from obscurity into the rhythm guitar slot of the biggest rock band in the world in late 1991, Gilby Clarke has always remained true to himself even as he has traversed the many “unique and interesting journeys” of his life.

“You’ve got your dreams and your ideas about what you want to be throughout your life, and then reality happens. While I was young, I always thought I’d be that guitar guy like Ron Woods with Rod Stewart, but that never really worked out. And the thing is, I’ve always been myself through all of it. I’ve always retained my integrity, I’ve really always played the same guitar, the same Les Paul, the same Marshall amp with Guns N Roses, the MC5, Nancy Sinatra and Heart. So many guitar players these days are chameleons. They’re versatile, which is a great trait to have, but I don’t know if they have their own identity. I think I definitely have an identity.”

His identity right now, as he completes work on his new album and prepares for a long-overdue return tour of Australia, is rock n roll. It probably always will be. He knows his records won’t sell millions, but they’ll be embraced by those who love his music.

“I kind of look at it like the blues, or jazz. It’s for a select audience. It was the dirty underground, like the ugly step sister. I’m ok with rock n roll being like that. I think we all got a little too popular in the late 80s, early 90s, but it’s dark and it’s dirty, and that’s what it’s supposed to be.” 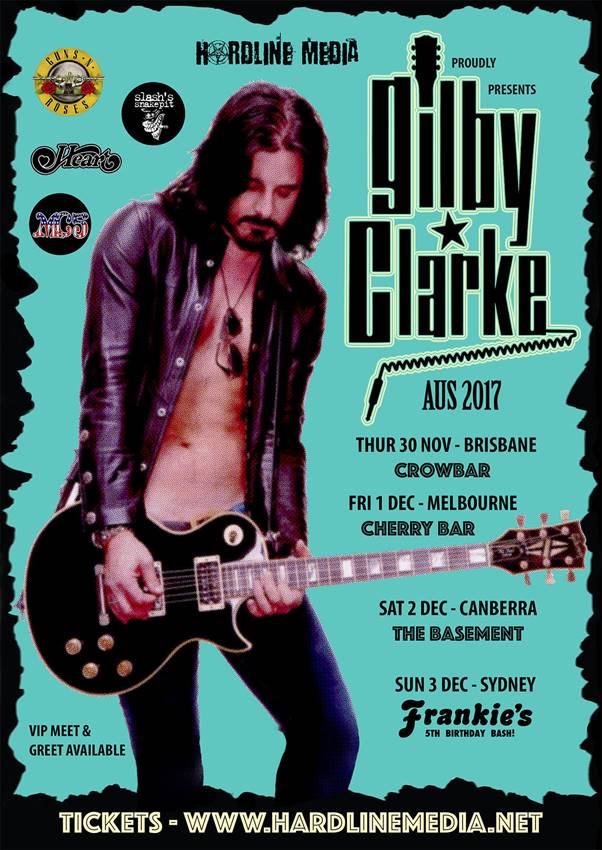