Glenn Hughes: In a White Room

The music of legendary rock supergroup/power trio Cream lives on via The Music of Cream 50th Anniversary Tour featuring the bloodline of its virtuoso musicians. Celebrating the 50th anniversary of Cream is Malcolm Bruce (son of the late Jack), Kofi Baker (son of Ginger), Will Johns (nephew of Eric Clapton and son of Zeppelin/Stones engineer Andy), Robben Ford as well as special guest, ‘The Voice of Rock’ and bassist Glenn Hughes (Deep Purple, Black Sabbath).

UK rock legend Hughes has recorded with artists as diverse as Gary Moore and the KLF, and been a member of Black Country Communion alongside Joe Bonamassa and Jason Bonham. Hughes was also hugely inspired by the music of Cream and Jack Bruce, with whom he collaborated on a number of occasions. Loud spoke to Hughes about the upcoming Cream-themed shows, being inducted into the Rock and Roll Hall of Fame in 2016 as a past member of Deep Purple, the next Black Country Communion album and more. “I’m so damn busy, but I like that, so it’s what keeps me going,” he enthuses.

Q: Even after this many years you still embrace staying busy?
A: It’s a two-folded question, because I really do like to be busy, but I want to be busy doing stuff I really want to do. I don’t particularly want to run around the place and not know what the hell’s going on. I like to be involved, prepare and plan, and get things done appropriately, because I’ve been doing this for so long it’s just become part of my life. It is my life. So for me to be honouring Cream with the children of my friends, especially my friend Jack Bruce, his son Malcolm, means a lot to me because as a kid growing up in England I learned how to play the music of Cream as a young student. I didn’t know when I was 14 that I was going to become a good friend of Jack Bruce. And of course I get a call to come to Australia with these kids, now men, and my friend Robben Ford, and we’re going to come out and play the music of Cream. It’ll be quite the occasion.

Q: Can you recall the first time you heard Cream’s music?
A: Of course. It came on the backside of when Eric left John Mayall and it really… Disraeli Gears, Fresh Cream, ‘Sunshine of Your Love’, that was a big hit. And then of course they had ‘Badge’, which was a moodier pop track. I could talk about it all day, because that kind of music in the mid-to-late ’60s was where I was coming from. At that time I was actually playing guitar, not bass guitar. I was learning how to play guitar. But I was very much in tune with what was coming out of Jack. Jack was a student of jazz. Ginger was a student of the tribal music of Africa, and Eric was the blues pioneer. So you’ve got blues, you have jazz, and in the back you’ve got a tribal drummer. No other band in history has ever been from that genre.

Q: Do you have a favourite Cream song, or it is impossible to say?
A: There’s quite a few. (Pauses) I’ve sung with Jack so many times; I’ve sung some Cream songs with him, and I’ve worked with Jack. It’s just an honour to carry the torch for him. I mean, I sang ‘I Feel Free’ with Jack about four or five times, and that song is going to be very special for me to sing in Australia, because I’ve sung it with the master himself. Jack taught me a lot about melody, and that’s what I’ll be bringing when I sing these songs. I won’t be changing the melodies… We’re going to keep these melodies very on-point, because these are the way they were written.
I’ve been asked if (there’s) anything we’re going to change in the songs. Well of course the musicianship will be slightly different because it’s different players. But what will remain the same for me is the… I want to bring these very beautifully written melodies to life on-stage. So that’s what I’ll be aiming to do.

Q: Your phone must ring regularly with offers to collaborate or perform with other musicians. Obviously this is one project that resonates strongly with you, though.
A: It is very special, simply because of my friendship to Jack. Of course I knew Eric; I still bump into Eric from time to time. But my friendship with Jack was very, very close and I know his son Malcolm. When I was asked to do this and to lead the way in this show, I said of course I would love to do it, simply because this is something that’s deep within me. I’m very much an old hippie and that’s who I am. I’ve still got a flower in my hair and that’s the way I’m always going to be. I’m just a peace-loving guy. So that’s why I’m doing it.

Q: Perhaps an element of Cream that is perhaps not fully acknowledged by some is how productive they were within just a few years together. Do you think that’s an aspect of their legacy that can get overlooked, that they had such a sizeable impact within a relatively brief period?
A: Well, it was Cream and Hendrix from ’66 to ’68. And then Zeppelin took the torch, and Purple took the torch. So in ’67 to ’68 those two bands, Cream and the Experience, were the two biggest bands in the world. And to get to play the songs with the kids of the band, who rightly deserve to be playing these songs, who love these songs, I think it’s a really great moment for us all. For anybody to be part of this and to come and see this, with the relatives of these icons, it’s not like a bunch of guys get together playing these songs in a pub. This is a respectful tribute to iconic musicians. So I hope people get a good handle on this.

Q: Why do you think their songs still matter to people, still register with audiences?
A: Because of the melodies. I spoke about the genres of Ginger’s playing, Eric’s playing and Jack’s playing. But it’s the melodic harmony stance of not just the vocals, but of the bass playing and guitar licks of Eric, and of course there’s the incredible tribal drumming. But the very melodic playing – Jack is a very melodic bass player and Eric of course is the king of melody – with Jack’s incredible stance on great melodies, just great melodies, very mournful. Pete Brown’s lyrics were crazy, but Jack’s very mournful lyrics, (they were) very sad and down, but they really, really spoke to me.

Q: Is that a conscious thing, or you just don’t have the time?
A: Only because it doesn’t come on to my radar. I may bump into it on the internet, but it’s something that I don’t… I have no mind about what they’re doing, I just don’t know what they’re doing, I’m not on their radar. It sounds kind of strange, doesn’t it, when you’re in this family… The only genuine relationship I have with anybody in Deep Purple is my brother David Coverdale. We’re very close, to this very day.

Q: Is that largely rooted in joining Purple about the same time? Or you’re just two like-minded individuals?
A: I came in about two months before David in ’73. He came in after me, and we bonded immediately. We bonded throughout the first tour, we bonded when Ritchie (Blackmore) left. And we’re still very close.

Q: That said, it must have been a real honour to have your contributions to their nearly 50-year legacy acknowledged as part of the Rock and Roll Hall of Fame induction?
A: Oh, it was great, it was a really lovely moment for David and I to be… We don’t get to choose who selects, the board, the committee selected to choose David and I over the other guys that weren’t nominated. I think what we did in Purple after (Ian) Gillan and (Roger) Glover left, David and I, I think it spurred a lot of interest in the music industry in America. So I guess they gave David and I the honours to be on-stage and accept the awards, which we were honoured to do so. We were there, and had a lot of fun.

Q: You released your autobiography in 2011. Are there any plans to issue an updated version to incorporate events such as the Hall of Fame induction?
A: There’s talk of it. I’m thinking of doing some other work about books and stuff… But I can’t really talk about it right now. But there’s going to be a movie, we’re working on a movie right now which will be out next year regarding some stuff I did in Deep Purple which was really, really wild stuff. Not so much drug stuff, but really stuff that, it’s in my book, so there’s some stuff we’re going to do from the book that will be made into a film. So that’s what’s going to happen next year, we’re actually working on it right now.

Q: Could it be for a streaming service such as Netflix?
A: I’m not sure. It will at least be something like that because we’ve been working on it for about a year. We’ve still got some stuff to shoot, but it’s gonna be… It’s the story of when my bodyguard was killed in Indonesia, and what happened. The aftermath and what happened before it. When Indonesia went to war on another country, and we were caught in the middle of it and my bodyguard was murdered. And of course I was thrown in jail and it was a long, horrible, horrible week of me being in jail. It’s something that we feel is a really good thing for a movie and a book, so that’s what we’re working on right now.

Q: What’s the latest on the next Black Country Communion album?
A: It is coming out the middle of September. I’m meeting with Joe and Kevin (Shirley) tomorrow, we’re going to listen to the new mixes. It’s all done, it’s ready to go.

Q: I was talking to Joe last year, and he indicated some disappointment that the public perceived there was bad blood between the pair of you following the split. He was adamant that wasn’t the case.
A: Joe and I have never fallen out. Let’s just say that when the band broke up, Joe was very, very busy. He couldn’t really do anything outside of the Bonamassa (band), which we knew going into Black Country. So when it became clear that Joe couldn’t clear his schedule, we felt it would be appropriate to break it down for a while, and just go on with other things. And of course a year ago when I got inducted into the Hall of Fame, Joe called me to congratulate me, and we talked for a while, had dinner and we discussed making a new Black Country album, which we’ve now done. And we’ve never been more friendlier; we’ve never been close as this, and long may that continue.

Q: Any famous last words?
A: Really looking forward to coming back to Australia, a place I love so much. 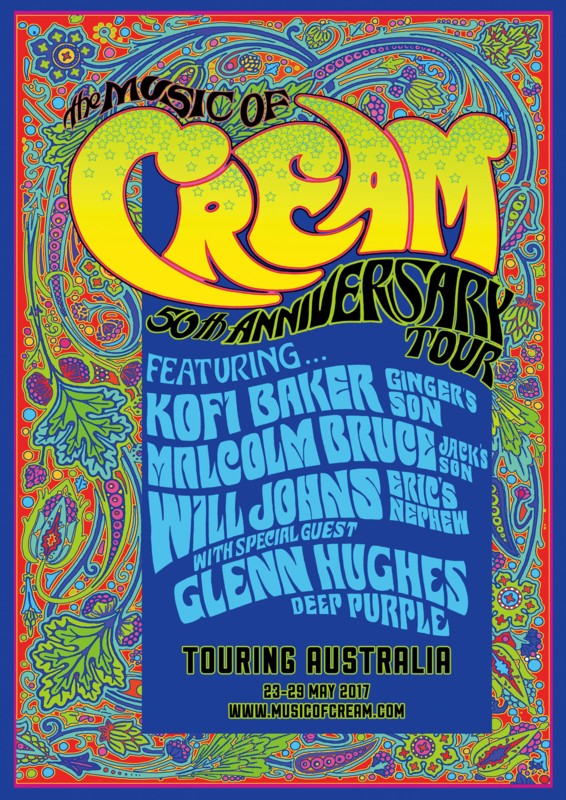