Latest release: S0 That I Can Have Them DestroyedWebsite: www.hard-ons.net

It seems incredible that high-powered punk rock metal maniacs the Hard-Ons have been Australian underground music champions for over thirty years. They have done dozens of tours around Australia and around the world, with a phone book of bands from punk icons the Ramones and Rollins to major Australian acts like Hoodoo Gurus, 90s pop darlings Frente and Ratcat and superstars including Faith No More and Red Hot Chili Peppers. That’s a broad palette of acts for a self-described punk band to be playing with.

“We’re a punk band, but we’re not punk people,” declares bassist Ray Ahn. “Blackie and Keish aren’t punks. We grew up liking punk music, but we’re not punks. We like a lot of music. There’s nothing wrong with that. You can’t be dishonest to yourself. A lot of my friends are from the metal scene. Keish used to live with Wayne Campbell from Mortal Sin in Parramatta. We got a lot of punk friends, but we made a habit of making sure that we played with a lot of different bands because we had interest in it.”

The Hard-Ons – Ray, Peter “Blackie” Black (guitar), Keish de Silva (vocals) and Murray Ruse (drums) – were a trio for most of their previous existence until former drummer Keish rejoined on a permanent basis three years ago. On Friday they finished mixing their first album in nine years and first as a four piece, So That I Can Have Them Destroyed. This coming Friday they will reach another milestone when they go out on a national tour with rock legends Rose Tattoo for the first time.

“I’m shocked that we haven’t played with them, because we’ve certainly played with a lot of classic bands. At one stage we were gonna play with the Divinyls, but we never did, and that’s a bit of a shame. We know a couple of the guys in the band. We’ve been friends with them – not incredibly good friends because we don’t mix in the same circles all the time – and they’re a little bit older than us. They’re from before punk happened and we formed after punk happened so their sound’s different and they’re from a different world but we definitely have a lot of mutual friends.”

Rose Tattoo have been on a hot streak themselves recently. Now featuring one-time AC/DC bassist Mark Evans, former Angels and Skyhooks guitarist Bob Spencer and drummer Jackie Barnes alongside long-serving slide player Dai Prichard and frontman Angry Anderson, the band has been tearing through sold out shows, recently slayed the crowd on a hard rock cruise in the US and will be playing at the Wacken Festival later this year. Despite this, Anderson has been on the nose with many punters for his outspoken beliefs on Muslim migrants and his association with stridently racist political groups. Three years ago he stood for pre-selection with the extreme right wing Australian Liberty Alliance.

When the tour was announced, there was an immediate backlash from some loyal Hard-Ons fans who voiced indignation and dismay at the band’s decision to tour with Rose Tattoo given Anderson’s political stance. Ray dealt with the issue directly on his personal Facebook page with a long post that was eventually deleted, and he was interviewed about it soon after on Double J. In a recent interview with Steve Mascord, Bob Spencer pointed out that the rest of the Tatts don’t share Anderson’s political leanings.

“Me and Blackie and Keish and Murray in the Hard Ons are completely left-voting,” he continues, “but sometimes you play with bands who vote differently. It’s no big deal. It doesn’t mean anything to us. We just wanna play.”

Ray says that people are free to boycott them or the tour or both it they so choose. But he also warns of a knock on effect with ripples across the industry.

The Hard-Ons have probably suffered the slings of racism more than most. Being a multi-ethnic band has put them face-to-face with xenophobes and Nazis many times in their career. It’s something that Ray and Keish in particular have had to deal their entire lives.

“The Hard-Ons are not your enemy,” Ray says. “We’re just a fuckin’ band! And I’ve gotta tell you, the only people who’ve come up and said something have been white people. White males. Those people have got a choice. When they walk out into the street, their face is not a political statement. They are not acting as a political being. Me and Keish, the moment that we walk out in the street with our coloured-skinned kids, we are saying something. We are a minority. If someone wants to say something against us, we have to be on guard against that.”

He points out that his experience hasn’t been too bad overall, but he’s still the one who has had to ask questions about how to deal with being a member of a minority group.

“The answer has always been the same – to see the common good in everyone. To say, ‘Ok, what do we have in common?’ Rock n roll… we all want the same thing, we all want our families to be safe… I’m not counting crazy weirdos who want to go and kill people. I’m not talking about those people. I’m talking about everyone else. People ask how you can be in a racial minority and play in a punk band and deal with everyone.”

In the end, it all comes down to one thing.

“You just have to have faith in the power of music, thinking that it can do some good and bring people together.”

For 35 years, the Hard-Ons have been doing exactly that. 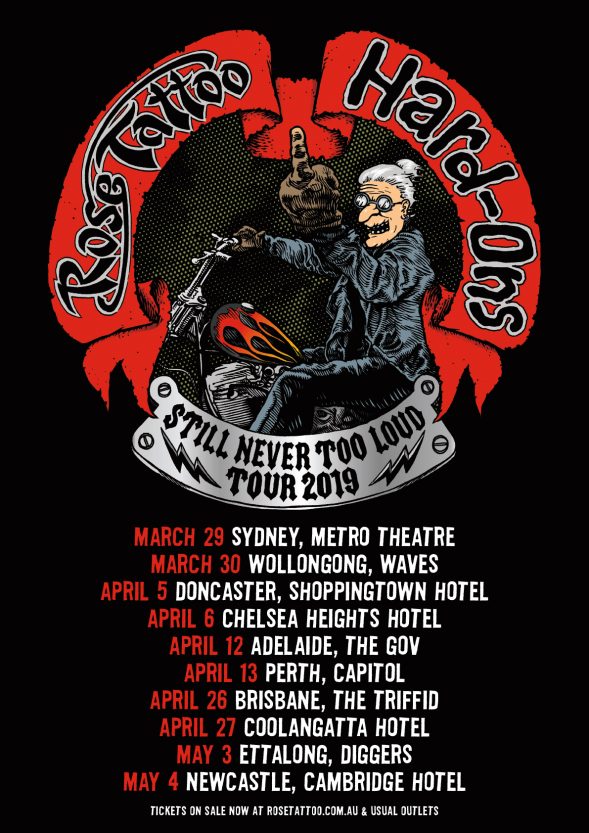