Jocke Berg from Hardcore Superstar doesn’t mince words when it comes to talking about the last time his band were meant to visit Australia – with the 2016 Soundwave Festival.

“Somebody fucked that up,” he says frankly. “They changed our schedule and we didn’t get the money, so we cancelled before we came out.”

With most of the line-up getting underpaid or not paid at all, Hardcore Superstar probably dodged a bullet by not joining the tour. Three years further on, the Swedish sleaze metal quartet are finally making their return visit to Australia, opening their account in Sydney tonight. The band’s latest album You Can’t Kill My Rock n Roll, set to drop in September, has already spawned four singles which fans have embraced as a solid return after the lukewarm reception 2015’s HCSS received.

“The response from the fans and the audience has been overwhelming,” Berg declares, “so I think we’re onto something here.”

Berg is honest about the mixed reaction to the previous release. A group of songs from the band’s deep past that they decided to finally record and unleash onto the world, fans were divided about its appeal.

“On the last album, the songs were over twenty years old,” he explains. “We liked them, so we re-arranged them a little bit, and rewrote them and wrote an album around those songs, but when we released it the fans were like, ‘What the fuck are they doing now?’ 50% were liking it but saying it wasn’t Hardcore Superstar. Me and the boys in the band love the album and we’ll stand up for it, but maybe when you listen to it, it’s not the typical Hardcore Superstar sound.”

“But on this new album,” the singer asserts, “we are back! Back on track.”

You Can’t Kill My Rock n Roll is Hardcore Superstar’s eleventh album, one that hearkens back to the earlier sleaze punk thrash style they pioneered in the late 1990s on It’s Only Rock N Roll and its international follow-up Bad Sneakers and a Piña Colada and best crystallised by 2007’s Dreamin’ in a Casket.

“We [always] tried to do a crossover in between sleaze and thrash,” Berg says, “so that’s why we invented the name of the music we play: sleaze metal. You could say we are the grandfathers of sleaze metal!”

Grandfathers, perhaps. Survivors, certainly. Twenty one years on, Hardcore Superstar are still enjoying wide success and positions in the Swedish music charts while other bands they inspired have faded away. Jocke Berg believes that the lesson may lie in putting the emphasis on music over image. However they may look, their music has always come first.

“A lot of those other bands were image first and music second,” he says. “You have be vice versa. You have to let the music do the talking. The music and the image found each other some way. There were a lot of bands that couldn’t play. First of all, learn how to play your instrument. Maybe that’s why they’re not around anymore.” 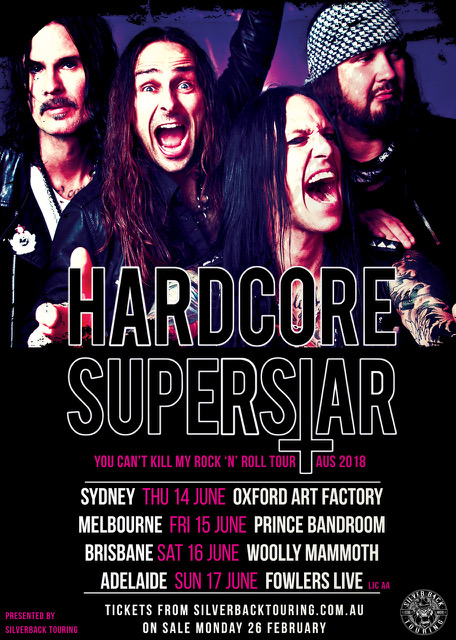