The band is also set to hit the road in support of the record from March 24 until April 29 alongside Daemon Pyre and Zeolite, taking in Ballarat, Melbourne, Newcastle, Sydney, Warrnambool, Alice Springs for the Blacken Festival, Adelaide and Brisbane. Vocalist Ben Roberts gave Loud the lowdown on the record, their eye-catching ‘Wildfire’ video and playing a gig with Fallujah.

Q: Hollow World just played a support slot with US death metal maestros Fallujah in Melbourne. How was that experience?
A: It was weird playing on a Monday night. We hadn’t played one before – and it was definitely different. I love that venue though. It’s so intimate. We had a fill-in guitarist who absolutely dominated, and the crowd seemed really receptive to our stuff. Then Fallujah hit the stage. Hot damn they can play. I likened it to “playing metal with the cheats on”. They played a lot of stuff off the new album Dreamless (which we all love) as well as some older stuff. Let’s just say you wouldn’t want to be playing after them. They’re incredible.

Q: After a couple of EP releases and some singles, the band is releasing its debut full-length. How’s the feeling within the camp – excited? Nervous? Confident?
A: Excited is definitely the right word to use. It’s been a long and exhausting journey for us to get this album finished. Now that it is ready to go we are just super excited to get it out and see how it goes. We couldn’t be happier with how it sounds, the artwork, everything about it is better than anything we have ever done in the past. We are just raring to release this thing.

Q: What lessons did you learn from those previous releases that you applied to the album?
A: This album was the first time we’ve used live drums. We always programmed them in the past, mainly because of how expensive drum tracking is. We knew that if we were doing a full-length that we had to do it all properly, so that was definitely one thing that we gained from the two EPs. I think also that we learned a lot about tracking in general. A release that is well tracked will always mix better – so we really worked on precision and consistency before heading into the studio. In terms of vocals, I learned that tracking during the day when I had more energy gave a better result than night sessions, so we made most of the vocal sessions during the day.

Q: Who are some of the band’s main influences, both musically and lyrically?
A: Musically the main influences are The Black Dahlia Murder, At The Gates, Fleshgod Apocalypse, Fallujah and The Faceless. Lyrically I take influence from those bands too to a degree, but I’m really heavily influenced by Nick Cave in terms of his story-telling and also his uncouth use of words. I also take influence from Tool in the way that they like to build up multiple underlying stories and themes within a song or album.

Q: The new record features a detailed, two-part concept. Tell us about the overall story and who conceptualised the idea.
A: The story is about a super-virus that kills off humankind, and the other tangent is that the human race are this super-virus that kills off the planet. The two stories kind of twist around each other as the album plays out.
After the second EP the guys decided that they wanted the album to be a concept album if possible. We discussed a few ideas and I let it stew in my head for a few months. After a while I started coming up with the initial ideas behind it, and it turned out a friend of mine happened to be studying bio-genetics and gave me a crash course and a heap of documentation about how viruses work. I immersed myself in that and it just kind of took off and developed from there.

Q: Can it be disconcerting at all knowing that given the effort you’ve made to devise such a story-line, while some fans will read the lyrics and explore the concept, others will just want to enjoy the music for what it is and not delve deeper?
A: It doesn’t bother me at all. I’ve always loved writing, and I wrote the kind of story and lyrics that I would really like to listen to and read if someone else wrote them. I’m fully aware that there are plenty of fans of our type of music who aren’t all that interested in delving that deep so I tried to write it in such a way that it would appeal to that too, but for anyone who likes to really read into it all then that aspect would be catered for as well.

Q: Melodic death metal is a popular sub-genre, albeit one that is often maligned for lack of innovation nowadays. How did you attempt to buck this trend with Exanimate?
A: We are a band that fits into a genre because of how we end up sounding – not because we write to fit into that genre. To be completely honest we didn’t once think “is this melo-death enough?” or anything like that. We just started writing and the songs took their own shape. I think because of that it doesn’t really sound like a typical melodic death metal album, but there are still plenty of worship moments thrown in for good measure.

Q: The video for new track ‘Wildfire’ clearly indicates at least one member of the band is a fan of The Walking Dead. How challenging can it be for an underground band with a limited budget to make a video that will not only be visually exciting to existing fans, but potentially grab the attention of listeners throughout the world?
A: Luckily for us the guys who put the whole thing together really looked after us and catered to our budget. It still was not in any way cheap, but they really did go to extreme lengths to get the most out of the budget that we did have to work with. It definitely helped that all of the extras we used volunteered their time as well, so that cut costs down massively.
Money aside, I think what really worked well in that clip is that everyone involved had a hell of a lot of fun making it. We shot it over a weekend and both days there was such a good vibe on set and it really carried over into the clip. You can tell when you watch it that it was a lot of fun to make. I think the best thing you can do when working with a small budget is make the clip as ridiculous as you can. That always grabs attention.

Q: The band is hitting the road in support of the LP. What are the best and worst aspects of touring Australia?
A: The best aspects would be that it is a lot cheaper than for us to go and tour overseas, so we can do it more often. Also you’re still in your home country so that is always a plus.
The worst is that it is such a big country that it takes forever to travel between cities. You can’t drive an hour and be in a different major city like you can in Europe or the States. Another bad aspect from a band’s perspective is that in such a big country there is such a small population so your potential audience is spread out so much further. And Perth is so bloody expensive to go to!

Q: Metallica or Slayer?
A: Metallica. At least they don’t just keep releasing the same album over and over.

Q: Any famous last words?
A: If you like your music fast, you will like us. That is all. 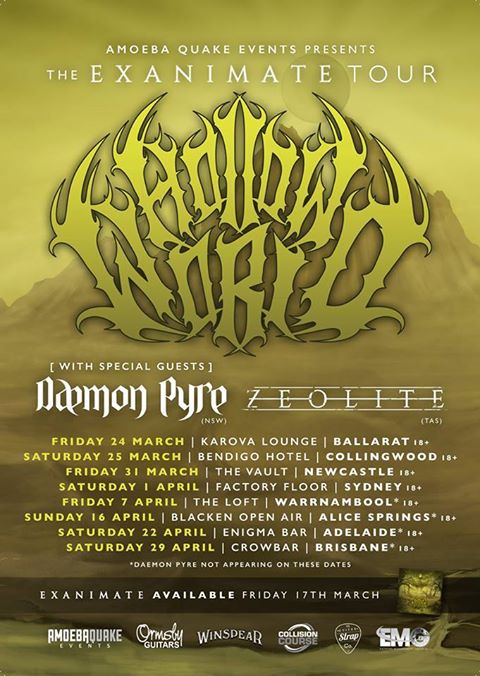