Immolation: Crushing the World Below

New Yorkers Immolation have been doing the death metal thing longer than almost anyone else. Formed in 1988, the four piece helped to establish the blueprint for extreme metal and nine albums and 28 years later they show no signs of slowing down. On the eve of their very first tour of Australia, affable frontman Ross Dolan took a few minutes out of his family schedule to talk to Loud.

Hey Ross, how are you looking forward to coming Down Under soon?
It’s great man, we’re excited. I just did an interview with a guy from New Zealand. We’re psyched! A couple of weeks.

It’s going to be exciting to have you here as well. Immolation are legends to a lot of people. You guys helped to invent a lot of the things that we take for granted now.
I think we have the longevity factor on our side. Whether we are legends or not is debatable, but we’ve been around for a while so we’ve seen a lot. We’ve been there since the beginning. I mentioned that to the other guy (NZ writer) and I said that we’re glad to just still be relevant.

What else is left for Immolation after all this time? Is there still territory to cover?
We still haven’t been to a lot of areas. This will be 28 years for the band and this is our first time coming to see you guys. We’ve never been to any of the Asian countries like China, Japan, Malaysia, any of those areas. We’ve never been to India. We’ve done North and South America but never anything in Central America, and of course we’ve done Europe and some of the eastern countries like Lithuania, but we’ve never played in Russia. I’ve alway wanted to go to Japan, that would be a nice one to do. But for now – one at a time!

If you could go back to 1988, there’s no way that you could have ever expected death metal to be where it is now.
No, you’re absolutely right. When we started it was such a small niche. A small clique of people, not only in the New York area but around the world. We pretty much all found each other. All the bands were trading demo tapes… we had no long-term goals, we certainly didn’t foresee this taking us 28 years into our future. Our short term goals – our only goals at the time – were jamming out, playing dark heavy music that we enjoyed. We recorded demo tapes and we would share with our buddies and friends and bands that we hung out with, maybe play a local show or two, but that was it, man. We had no illusions about signing any record deals. That all came as a shock. We were kinda like, Really? Roadrunner wants to sign us? Why the fuck would they want to sign us for? That was the attitude we had. We knew that what we were doing was just so far off the beaten path at that time. Right now it’s so accepted, it’s ridiculous. I never thought it would get to this point. It’s kinda cool to have been there from the beginning, to see it evolve into the worldwide movement it has become. It’s awesome. It’s awesome to still be part of it, actually!

There’s so many bands that didn’t last the distance. Do you think the fact that Immolation never got to the level of being a huge band has meant that you’re still around after all this time?
I’ve thought about that a lot, and it does make sense. We’ve never had any overnight success with this band. We still have to work, it’s not like we ever made a living off of this. Not only has it kept us grounded, it kept us hungry, it kept that passion burning. Nothing came easy for us, we always had to work to get what some of those other bands got right away. I think it just kinda kept us grounded and it kept us hungry and I think it did contribute to our longevity. It’s always been a challenge for us, but in a good way. It was a good challenge. We’ve made plenty of sacrifices to do this. We’ve directed our lives, our personal lives, our work lives, around this passion. You know, it’s nice, if nothing else, to be able to visit cool parts of the globe that we’ve been like Australia, New Zealand, great places like that. That’s what it’s all about, this journey where we’ve been able to meet great people all over the world who are like-minded. It’s awesome man, it’s awesome.

You would have seen a lot of people grow up with you, and then of course there’s a whole generation of fans listening to death metal music who weren’t even born when Immolation first started. That must be incredible for you to see that.
It really is, and it’s funny you said that, because the guy I did the interview with before this one, the guy from NZ, he was probably 28 or 26. He was like, ‘Oh, you’ve been around longer than I’ve been alive!’ After a show, some kid will come up to me and they’re like, ‘Oh man, I love your band’ and ‘I’m, How old are you?’ and he’s like, ‘I’m 16’. Now I feel old! It’s crazy. I’ll be 47 in a couple of months. We’re all mid- to late-40s everybody’s who’s in the band, but it is cool because we get a lot of old school fans who are our age come out to the shows and they have their kids with them! Their sons and their daughters who are into the music, there’s a whole new generation of fans that are into the music. It’s great to see them pass that torch.

Well I’m your age Ross, and I was always told that I’d grow out of it or get too old for it. Now we’re the old guys – and we’re still doing it.
If I had a dollar for everytime I’d heard that it was just a phase or I’d grow out of it… My family has been super supportive of this whole journey, from the beginning, but there was always those moments in the early days where it was like, ‘It’s a phase, He’ll grow out of it’. Here we are, like you said, it’s become part of who we are.

We’ve seen so many trends come and go musically, in every genre – what do you think it is about death metal that keeps it going after thirty years?
I think it’s honest, man. It’s true. It taps into that inner beast that we all have, and it’s honest. Every band that we’ve had the opportunity to tour with and share the stage with, everybody has been really passionate and their music has something to say. Everybody kind of gets that aggression out through the music. The crowds feed off that aggression, that rage, whatever they’re going through music helps pull you through that. I can state personally that it really helped me through some really hard challenges. Even those years where you’re trying to find yourself, metal was a big part of me finding who I was and what I wanted to do. I don’t know where I would be or what my life would be like without the music, other than empty and very bizarre for me. Getting back to the question, I think this music is honest, it’s true and because it’s not mainstream, it has always been underground – to an extent, these days it’s much bigger – but my point is that people aren’t getting rich playing this kind of music, so there’s not financial incentive to get into playing this type of music. You have to really want it, to get into this type of music. We knew that from the beginning. We knew that we were still going to have to have our jobs and work our jobs to pay for playing our music. We knew that back then! We weren’t stupid. But I think that’s part of it, though.

What’s your personal listening preferences?
I listen to everything. My musical tastes are all over the map. Of course I like extreme metal, I like death metal, I like black metal, I love classic rock – Led Zeppelin, Pink Floyd, Queen, Steppenwolf. I love a lot of the female vocalists like Tori Amos and stuff like that. I just like music that has feeling. I like some weird, dark stuff too. I’m kind of all over the map. I listen to metal cause it’s kind of, you know, my true love. I’ve been in love with metal since Maiden and Priest and Motley Crue, all that earlier stuff. I’m kind of all over the place. I’ll go through stages where I’m like, I want to listen to Defenders of the Faith for a week straight, something like that.

You must have people who come up to you and tell you that they listen to Immolation all the time, too. How does it make you feel when they say that?
It’s flattering, man. I never expect that, so it always kinda throws me off, but it is very cool. It’s always flattering to hear that, for sure. It’s cool that people like what we do. We never expected that, and it’s not why we do it. You kinda just do it for yourselves, and if people like it, that’s cool.

Win tickets to the tour here. 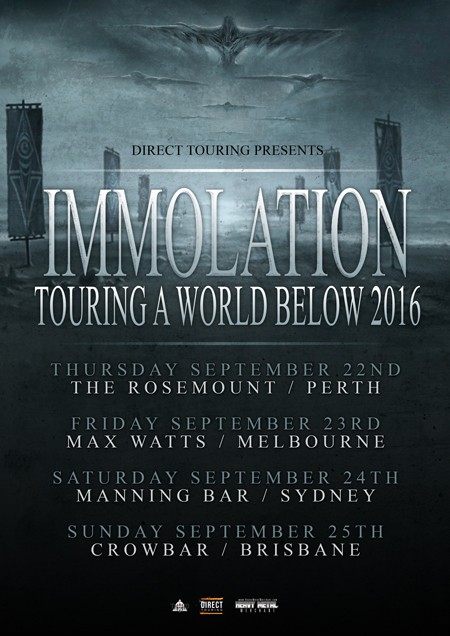 Napalm Death: A Bellyful of Rage

“Every night you want to bring your best to the audience and you kind of want to show the band you’re touring with, what your best is”

The Casanovas: Rock N Roll Over

“Damo and I were joking that we should do some kind of publicity stunt and play a show on a rooftop somewhere, and get arrested”