The Iron Maidens: Wherever You Are

Home > Features > The Iron Maidens: Wherever You Are

Billed as the world’s best (and only all-female) Iron Maiden tribute act, The Iron Maidens are bringing their blistering live shows to Australia and New Zealand for the first time, delivering renditions of all your favourite Maiden classics.

The band is comprised of Kirsten “Bruce Chickinson” Rosenberg (vocals), Linda “Nikki McBURRain” McDonald (drums), Courtney “Adriana Smith” Cox and Nikki “Davina Murray” Stringfield on guitars, and Wanda “Steph Harris” Ortiz (bass). Having received the thumbs-up from Steve Harris and Bruce Dickinson, California’s The Iron Maidens have established themselves as one of the premier tribute acts in the world, having performed throughout Europe, the UK, the Middle East, South America and Asia.

Loud spoke with Cox, who also plays in glam metal band Femme Fatale and The Starbreakers (alongside Nita Strauss and Jill Janus) about The Iron Maidens’ international appeal, their interactions with members of Iron Maiden, the #MeToo movement and more.

Q: What initially drew you to the guitar, and also to hard rock and heavy metal?
A: Growing up I was always the band geek in school, playing clarinet and stuff. I was just always drawn to music. My grandmother was a pianist, so I always listened to that growing up. Eventually I was too cool for woodwind instruments any more (laughs), and my brother was an avid metal fan, so I always had that growing up too. It was just one Christmas where I went to my father and was like, ‘I want to play guitar’. He looked at me weird, but I picked it up and within a week I was playing along to my Metallica albums at the time. History started there. I always drawn to metal and stuff. Priest, Maiden, Saxon – I listened to everything.

Q: When you’re part of a long-standing tribute act, how much does the show evolve? Or do you have a staple show in terms of set-list, presentation, etc?
A: I started in ’09 and we’ve had a number of changes, so in that aspect, yes. We play the hits because you have to, and it’ll keep people happy. Over the months we just decide to add this song off that album; the set-list is constantly changing and I think being a band that’s going 17-plus years, you have to do that or you pretty much go insane. We try to keep with the times with the stage show… Other than that, it’s a powerhouse, we just keep chugging along. We have our Eddies, or Edwina, our female version. So we bring out monsters on-stage. It’s kind of funny to see these monsters come out without knocking your amp over (laughs). We have CO2 going off, light changes, we have all the intro tracks and stuff. We just want to keep it a Maiden show, but on a small budget (laughs).

Q: Do you largely focus on the Bruce Dickinson era, or do the Paul Di’Anno and Blaze Bayley eras also get a look-in?
A: I’m speaking for her, but I know Kirsten’s more of a Bruce era fan. But we try to incorporate both as much as we can. Every set-list we at least try to have three Paul era songs in there – recently we’ve been ending with ‘Iron Maiden’. Actually, last time we played in London we actually got to play a few songs with Paul, which was pretty sweet.

Q: No love for pool old Blaze Bayley then?
A: I love ’em all, and we actually just added ‘The Clansman’ to our set, so we have a little Blaze in there. That’s a great song.

Q: Indeed. How do you approach playing Adrian Smith’s parts – do you attempt to copy him note-for-note, or put your own spin on the material?
A: Initially learning it I do note-for-note, because I’m not him, so live, my style of playing comes out for sure. Certain instances of notes and bends. I use the whammy bar a lot ’cause I’m a huge Dimebag Darrell fan, so that comes out. I try and say, you have to hit the key notes that make the solo what it is. But other than that… You’ve got to be true to yourself at the same time. It’s a fine line, I would say, being in a tribute band. You don’t want to lose yourself as a player.

Q: Which qualities of his playing do you like most?
A: Just how melodic it was, it always made the hair stand up on my arms and stuff like that, made me want to air guitar. Solos like ‘Still Life’ and stuff like that, the note choice is just so perfect to me. When I started playing it blew my mind, like, why would you… that phrase, why would you do it that way in this? Especially compared to Dave (Murray), who’s more the pentatonic feel. Adrian, even live, he just makes it look effortless. His note choice is just… oh (laughs). I could go on and on. It’s not like, ‘oh, here’s a guitar solo’, it’s part of the song. It makes for a great song, and that’s what Maiden does best.

Q: Have you met him, or any of the other Maiden members?
A: Yeah, I run into them randomly. I’ve met Adrian before, and I know his keyboard player and Steve’s (Harris) tech. Nicko’s (McBrain) always at NAMM every year. Somewhere in the world we always run into each other (laughs). They’re really great guys. I wasn’t in the band at the time, but apparently Steve told us to run with it. So that’s the greatest thing, when the band you’re portraying is giving you the green light. You couldn’t ask for more.

Q: What’s your favourite Maiden song to play live?
A: Oh, it changes constantly. For me, I think right now it’s ‘Sea of Madness’, ’cause I get to sing too, which is nice (laughs).

Q: The quality of Adrian’s voice doesn’t always get much recognition.
A: A lot of people forget about the B-Sides like ‘Reach Out’. It’s really good.

Q: This will be the band’s first visit to Australia. Does the group’s international popularity surprise you at all?
A: Yeah, for us, this isn’t a job. It’s a hobby, and it kind of took off and it keeps getting bigger and bigger. I would never have imagined the five of us going, ‘okay, we’re flying to Australia, let’s go’. It leaves me speechless almost. We’ve been to Japan and other places, but I never thought we’d make it that far. So we’re very humbled and I can’t wait to get down there.

Q: Do you feel the band unfortunately had to work harder than perhaps some male tribute acts to gain credibility and be taken seriously in some quarters?
A: The girls, speaking before I was in the band, they definitely put the time in. We put our time in now, but being women… The way I look at it, I keep gender out. It’s hard for male and female, regardless of what act you’re doing – original, tribute or whatever. I think a lot of people are struggling because the music business is just so different now. Everyone’s fighting to keep their head above water, the way I look at it.

Q: Being a female in the music industry for some time now, and playing in what has often been a male-dominated world of hard rock and heavy metal, do you feel that movements such as #MeToo and #TimesUp are overdue? What are your thoughts on those movements?
A: I’ve got to watch what I say because I don’t need someone coming after me. But you know, it was always always there and you were either a strong woman, or you weren’t. You could see through people, you could do this and that.
I mean, I’m shocked it took this long to be honest. It can be on either side… There are some women who are indeed victims. And I hate to say it, but some of them, I think they asked for it. It’s a really touchy subject. Me being in bands, touring alongside male bands, you see the groupies get on the bus and all that stuff, and get really mad when they’re kicked off. I don’t know, it’s unfortunate that we live in these kinds of times, but hopefully this movement sheds the correct light on the situation, and hopefully it can make the world a little better place for everyone.

Q: Any famous last words?
A: Save me some Vegemite, and we’ll rock out down there (laughs). 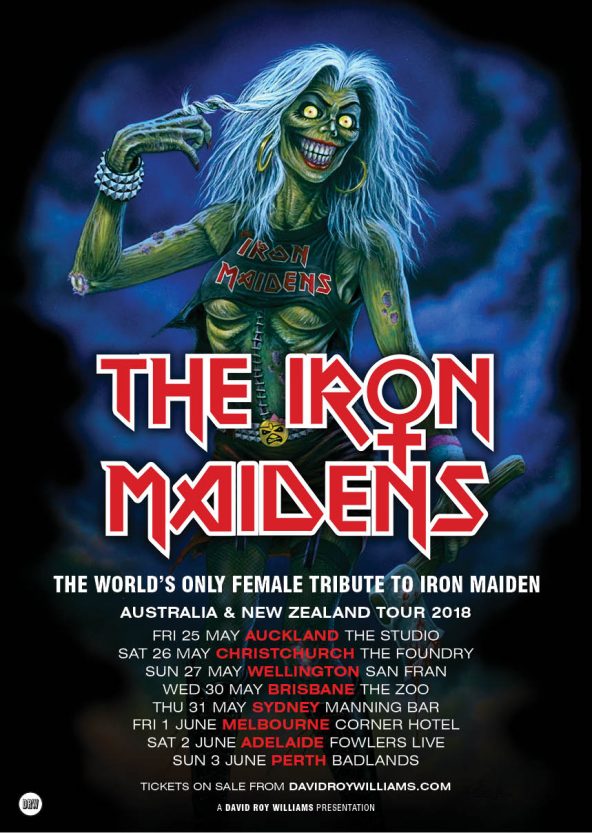