Jeff Martin: The One We Love

Home > Features > Jeff Martin: The One We Love

Jeff Martin was contacted almost a year ago about taking part in a tribute to one of the most influential rock bands of the last three decades. It has taken until now for the well-traveled singer, song writer, producer and guitarist to find a gap in his famously crowded schedule for the project, a celebration of the music of R.E.M. billed as The Ones We Love that will take to east coast stages in August.

“I was pretty tied up with The Tea Party and also here at Riverhouse, my studio here in Byron Bay,” he explains in a quiet but resonant voice. “I had a lot of production work with clients. So we had to get it to a point where, not only did I have time to do the shows, but where I had a good month prior where I didn’t have anything on my dance card and I could give it my full attention.”

Martin’s previous involvement in such a venture was a season of the Led Zeppelin, which he wryly admits “was not really a stretch” for fans of his work with The Tea Party or his solo outings. The connection to R.E.M. might seem a little more tenuous, although a deeper examination of both bands’ lyrics would find some similar themes weaving throughout.

“Michael Stipe, in his lyrics, certainly explores the darker side of the psyche a lot, and that’s something that was very tangible with my lyrical work with The Tea Party,” Martin says. “A lot of people wouldn’t know that I’ve been a fan of R.E.M. since I was quite young, and it also presented my with somewhat of a challenge and a very unique opportunity for me to explore some of those songs.”

He goes on to explain that listening to R.E.M. for the first time while in his teens was actually a major influence on him musically, particularly the lush tones of Peter Buck’s twelve-string guitars.

“Jeff Burrows, the drummer in The Tea Party, who is a year older than I, was the cool kid that listened to all the cool bands before anyone else did. I remember when I was 13 I went over to his house and he played me ‘Pretty Persuasion’, a very early REM song. It was the first time I heard that 12-string Rickenbacker jangly guitar playing. From there I fell in love with that style that Peter Buck explored, and from there I found out about his influences, which was Rush, McGuinn and the Byrds, that type of thing.”

That influence made itself most apparent in one of The Tea Party’s best-loved songs.

“‘Heaven Coming Down’ is fuelled by a 12-string Rickenbacker main theme all the way through the song. So had I not been introduced to that at that age, that song never would have happened. As a guitarist, especially me being the producer, I have an arsenal of guitars I use for different colours in the palette and that 12-string electric guitar sound is something that is prevalent in a lot more than just ‘Heaven Coming Down.’ It’s there on the peripherals of a lot of different Tea Party songs.”

Like with other projects of this nature, Martin is working with a repertoire of well-known musicians and singers that include The Church’s Steve Kilbey, Ron S Peno of Died Pretty, Alannah Russack from the Hummingbirds and Go-Between Amanda Brown. Like them, he has considerable artistic license with the tracks he’s been given to perform. The opportunity to mull over ideas hasn’t yet presented itself, however.

“I have yet to meet any of them and I certainly have a lot of respect for all of them that are part of these shows,” he says candidly, “but I guess what I’m looking forward to is that first rehearsal into the unknown and what will be the chemistry of what will come out and what it will be.”

There won’t be a lot of time for that chemistry to blend. The tour begins in Brisbane on August 31 with Martin’s own latest run of solo shows ending earlier in the month.

“The first rehearsal for all of us in the same room is mid-August, but my tour wraps up at the beginning of August so I’ll be able to come back here to Riverhouse and set up a rehearsal situation when I can, just on my own, get my head around the songs the way I want to interpret them and then take my ideas to the rehearsal with everyone else and see how it all turns out,” the singer promises. “What I hope for is some camaraderie and everything will cross-pollinate in rehearsal. Every singer has the songs they are going to perform, but in my case I’ve been asked to play more guitar on other songs and I’ve played asked to play mandolin as well. So I’ll be involved in the show more than I think!”

As mentioned, before The Ones We Love hits the road, Martin is out on another extensive solo tour. This time, he’s concentrating on a raft of songs he created while on a visit to Morocco several years ago. The resultant CD, Stars in the Sand, will be available exclusively at the shows, some of which have already sold out.

“It’s a wonderful thing you know,” he says of the tour, “because as far as solo tours are concerned even though it’s a couple weeks away from launching it, it’s the most successful one thus far. What I’m excited about is the EP that’s going to be available for my fans at these solo shows is a collection of songs that I started recording a couple of years ago when I was in Morocco working with different musicians from different traditions in various parts of Morocco. I brought those field recordings back here to Riverhouse and embellished them and created the five song EP. To say that it’s an exotic piece of music is an understatement.”

As usual, it’s a completely solo tour, without the safety net of a band, but Jeff Martin has a few tricks up his sleeve.

“There’s a few toys, bells and whistles that I’m going to be bringing with me that, if it all goes according to the way things sound in my head, it’s gonna sound like five or six people on stage.”

Tickets for The Ones We Love: Celebrating R.E.M. are available now. 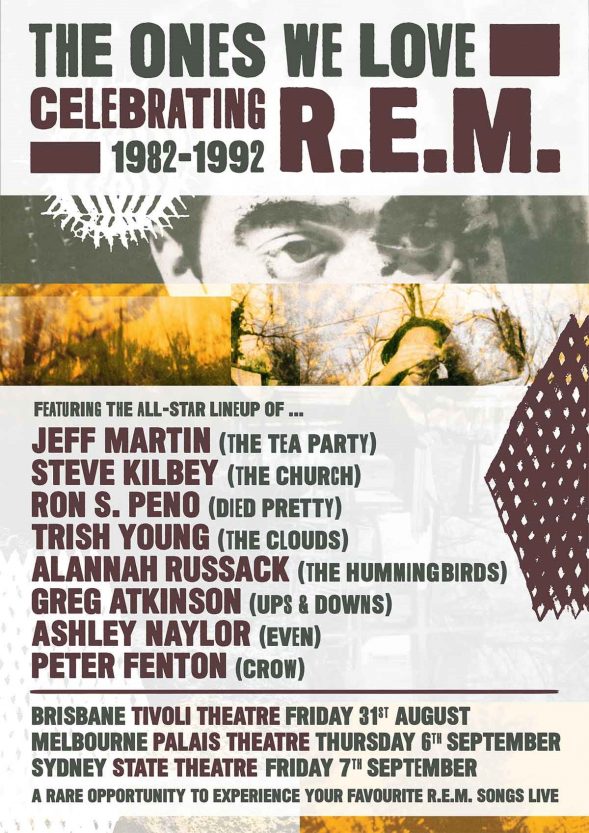