Keyboardist Jordan Rudess is both a virtuoso and a composer. His early education in classical music coincided with the rise of progressive rock music and the technological advances of the time allowing him to step out of the traditional pianist career path to establish his name as a solo artist. In achieving this challenging level of success, he furthered his career as a member of The Dixie Dregs who toured with Dream Theater and by way of contributing to the latter band’s side project albums for Liquid Tension Experiment, joined Dream Theater as their full time keyboardist in 1999. Many successful and sometimes ambitious albums later with both Dream Theater and in his own right as a solo artist, he has also made time to start and nurture a tablet PC based music software development company. Now on tour in Australia and New Zealand performing a solo concert titled ‘Bach to Rock: A Musician’s Journey’ that promises to entertain and enlighten many a progressive rock fan and classical music aficionado alike, Loud Online had the pleasure of talking to the man himself very recently.
Johann Sebastian Bach has quite an impressive back catalogue, if you want to call it that. What was the inspiration for you to get into classical music and in particular, Bach?
I went to Julliard when I was very young. I started there when I was nine years old and literally on the first day that I walked in, the first lesson that I had was on a Bach piece. So that was a real foundation and it is also the beginning of the story that I am going to be telling in my solo shows.

Deep Purple guitarist Steve Morse is very good at playing Bach’s partitas and you’ve of course worked with the Dixie Dregs. Dream Theater guitarist John Petrucci can also play that material as well as Chopin’s etudes. So, how does strict classical music compare to what you do within Dream Theater?
Oh, well the classical stuff is really the foundation for everything that I do. There are parts that I bring in and elements of Bach styled music within Dream Theater and elements of Bach too because, you know, I really respect that kind of music and I learned so much from Bach’s counterpoint and his unique approach to music. So there are definitely some similarities.

Technology has changed music massively and has grown so quickly in the last four decades. When you started out, did you ever expect that there would be Fairlights and Synclaviers when you were growing up?
Well, when I was seventeen years old, I discovered the Moog synthesiser and so I have always been really interested in technology. In those days, I was really surprised when we started to have things like samplers. I remember walking into a music store and seeing somebody press a key and just hearing the sound of an audience applauding or the sound of a string orchestra or an orchestra hit. So, I think that there is a part of me in those days, when I was just discovering the possibilities with synthesisers, there was a part of me that said, ‘Wow, this thing is amazing, this thing is all incredible!’ Now I am less surprised but I am just as pleased when advancements come because I am just more aware of what is possible as I am more plugged into that world.

Have you stripped down your live rig through utilising sampling?
I have stripped down my live rig because the instruments that I use are the most powerful keyboard instruments that are available today. In the past number of years I have been using something called a Korg Kronos [88 key synthesiser workstation] which is a top of the line keyboard that has all different kinds of synthesis within it. Not only does it have the ability to do sampling and to play back samples but it also has subtractive synthesis, FM synthesis [frequency modulation which alters a waveform’s timbre] and physical modelling [simulating a physical sound source]. So it is basically a beast that I can run with a large capacity for the number of sounds that you can put in it. It lets me do so much with one powerful instrument.

It is quite amazing how technology has also changed guitar amplification with say a Kemper [amplifier profiling modelling system] so it all stands to reason. Do you miss having the physical instrument present such as a Hammond B3 organ?
Oh, if I am playing on something that is emulating something else then sometimes, yeah. But the sounds are so great on these instruments that it kind of covers so much ground so you can be very satisfied. The reality is that there is something about playing say a Steinway piano, a real Fender Rhodes or a real Hammond organ that is satisfying to a different degree. But I don’t think that anybody in the audience is ever going to complain about my piano sound or the sound of the strings. They are great sounds and they sound amazing.

Your compositional and arranging skills are obviously very well developed. Given your knowledge of music, you believe that there is anything left to learn?
Oh there is always stuff left to learn and things to get better at doing. I mean, that is my whole life study, you know, just trying to not only maintain what I have but to try to get better, especially in the skill of playing keyboard. It is definitely something that I could spend my whole life on and that doesn’t include any of the other skillsets like composition, improvisation or orchestration and things like that.

How much room is there for improvisation in a band such as Dream Theater?
It depends but let’s see. In the history of our band, we’ve had jams on stage and periods where we improvise. I would say the larger percentage of what we do as a group, especially today, is more like a performance that is planned and scheduled, more like a Broadway show in so far as knowing what we are going to do. But when we are in the studio and when we are writing music, a lot of things come out of improvisation. For example, a lot the ideas on our new album came from just jamming around at sound check. So, the improvisational part of what we do as musicians is really important.

I guess that rehearsals then don’t lend themselves to being a learning or jamming experience?
Yeah, when we arrive at a rehearsal we are definitely expected to know the material and have it together. Yep.

On getting various sounds in a live setting, I read that you have used and Apple iPhone to get a synth sound [Bebot Robot Synth application].
I use my iPad and haven’t used my iPhone for a while but that’s cool. I have a company called Wizdom Music and we develop cutting edge music applications and next generation tools in instruments. What I have been doing is using an instrument called GeoShred which is our own very powerful instrument based on physical modelling and yeah, I use that live. As a matter of fact, my keytar and has turned more into an iTar, if you will. We gutted it and took out the keyboard and put in an iPad.

Would you say that for audiences, the keyboard is seen as a lead instrument or part of the rhythm section? In progressive music it is definitely leading but for mainstream it often is used for keyboard washes, layers and atmospherics.
Right, right but it depends on what style of music or format you’re talking about. If you’re talking about doing movie scores or something like that, the keyboard is king. For all of the guys doing movie scores, it is all about, you know, are they doing a real orchestral score or are they using their computer and all their synthesisers. So, in that world, keyboard is king. In prog, it has got a very big role, depending on the group and in some groups more than others. One of the cool things in prog that is interesting, especially in Dream Theater is that when we play lead, the keyboard can play a soaring lead and then the guitar can play a soaring lead. So the roles can easily move around to where one thing can take the centre stage easily. The thing about playing keyboards and of course personally in my job is that you need to kind of let go of your ego because a lot of times the sounds people pick up on are not noticeably a keyboard instrument. In other words, I might be playing a really heavy sound that sounds more guitar like or I might be playing a sound that is a sound effect. Then people don’t say, ‘oh that’s the keyboard’, it is only when you play a piano or organ sound or something like that where people say, ‘oh, that’s the keyboard’.

As your solo tour is approaching Australia very soon, your Sydney date is booked to play at the Sydney Opera House which is obviously an iconic venue. You must be looking forward to that show?
Oh, very much, it is going to be so exciting. I have walked by that building so many times and taken so many pictures there because it is so beautiful and now I will finally get to play there, which is wonderful.

Finally, is there a Dream Theater and solo album that you’re most proud of at this point in time?
I don’t really have a favourite to tell you the truth. I am very excited about our new Dream Theater album [Distance Over Time]. The name of it was recently announced. I am jazzed about that one, I think it is going to be super exciting. 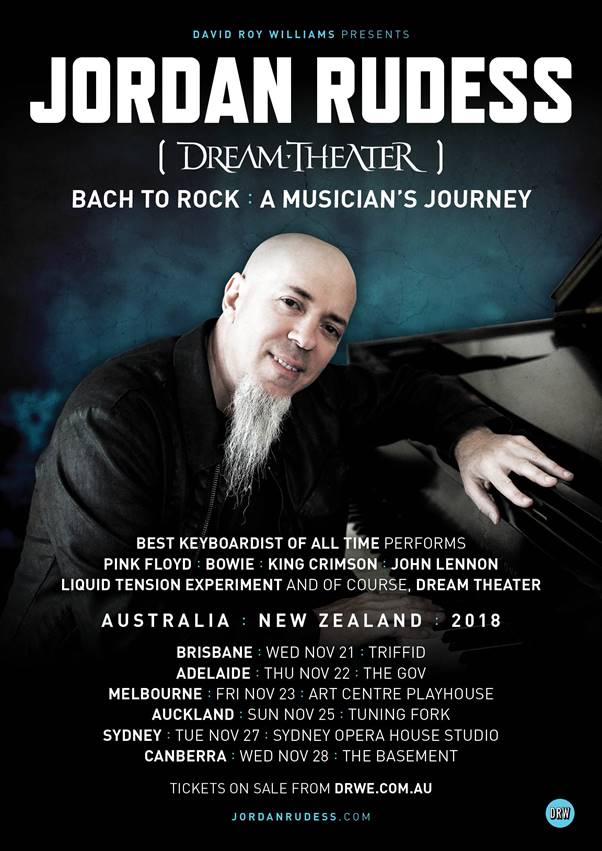