For fans of ARIA Award winning Perth proggers Karnivool, it’s been a long wait. The last time the band were seen on Australian stages was in July 2016. Since then, it’s been mostly quiet for the acclaimed five piece beyond vocalist Ian Kenny’s appearances with his other band Birds of Tokyo. So the announcement they will be performing at the 2019 Unify Gathering has caused a bit of a stir.

“I’ve been doing a fair bit of press in the last couple of days and there does seem to be quite a buzz,” Kenny says in his casually understated fashion. “And to be totally honest, we’re very excited as well to be playing again, and to be part of Unify. It’s a three-day heavy metal festival. There’s nothing like it anywhere in the country so it’s a bit of a magnet.”

Karnivool’s return to the stage after almost three years away should prove to be a magnet in itself, especially as they may be premiering new material there: “The band’s working on new stuff,” Kenny says offhandedly. “Hopefully we’ll get a few things together for Unify.”

That’s certain to be a clarion call for fans of the notoriously long-winded group, whose last album was released in mid-2013. Asymmetry, which went to #1 in Australia upon release and scored Karnivool the Best Heavy Metal/Hard Rock Album ARIA, was a divisive, oblique album that ratcheted up the band’s progressive proclivities to new heights and saw them branch in unexpected directions.

Were he given the chance, Kenny says there are things about Asymmetry that he would have done differently, just as he’d like to tweak the other releases if he could. But he’s at pains to explain what it was that made Asymmetry so strange and alienating, and it comes down to Karnivool reaching their own Some Kind of Monster moment.

“That record is a reflection of who the band was at the time. The band wasn’t comfortable with what we were trying to do,” he says. “We were finding our place in things and our place in the world and what Karnivool was supposed to be. It was fucking hard! It was really challenging for us to figure out. We were unsettled, we were a bit disrupted, we were pokey and prickly and it was really starting to come out in the music in this angular way. It’s uneasy. It’s an uncomfortable listen, because that’s how the band was. The band wasn’t sitting in any ok space. We were a bit fucked up at the time.”

In the wake of such an existential crisis, Karnivool took a long break after 2015’s Themata anniversary tour, a hiatus broken only by a short run of shows in 2016. It was necessary for everyone involved, according to Kenny.

“It did great for everyone I think. We’ve all been off doing different things and having different lives and I think the break wasn’t just not being active in the band, everyone just sort of stepped away and did other things but in its absence we’ve still been working on bits and pieces. We still see a fair bit of each other and hang out and talk music and listen to what people are doing, so that’s been going on in the wings in the absence of us not doing music and going out and playing shows. But it was good to have a break, man. Everyone needed it.”

Kenny also promises further that Unify and the small run of shows around it won’t be the only time we see or hear from Karnivool in the new year – “I dare say there will be more shows in 2019”. With the live return of one of Australia’s most seasoned campaigners to the already currently rosy heavy music landscape, the scene should be looking even healthier into the future.

“We’ve been in the game a long time,” Ian Kenny says. “There just seems to be something fucking honest and kind of real about Australian metal. It’s just got such a part in the fabric of Aussie music, and it seems to be getting better. Actual heavy music – metal or prog, as far as Australia goes, there just seems to be more bands coming out with some cats out there really bringing their game. It’s great!” 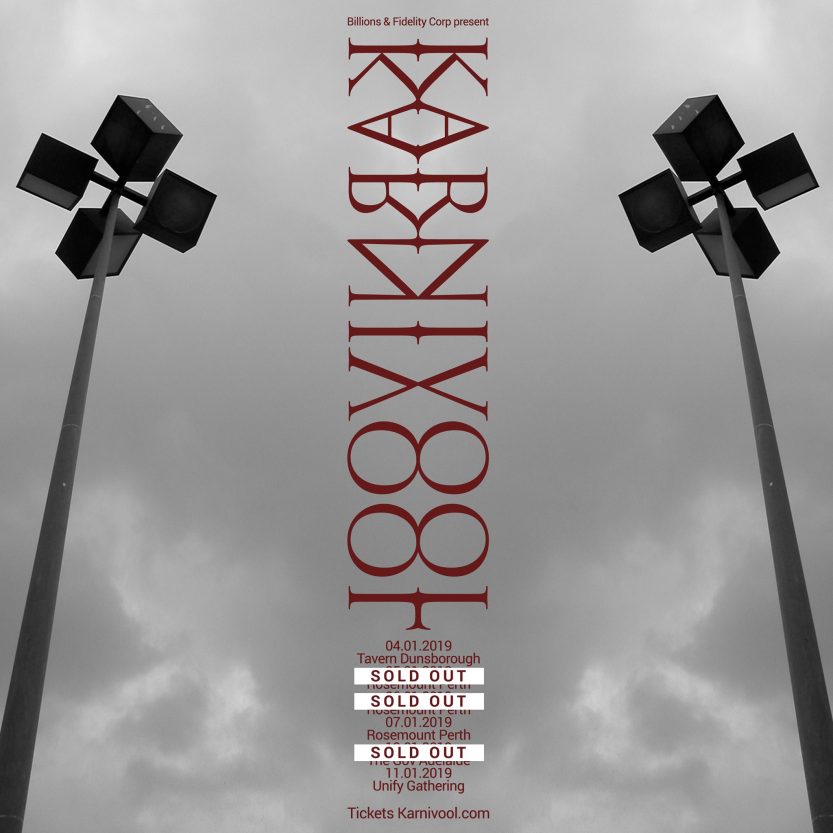