Mental metalheads King Parrot have just returned from a huge world tour  where they played through the US, the UK and Japan and since landing they have been announced on the bill at next year’s Download festival. Before that, the band will be on the road around Australia with Disentomb and Pagan for the Ugly Produce launch tour. They are also appearing at festivals in regional NSW and Tasmanian in January with more shows probably being booked as you are reading this sentence. With some time to spare in his hectic schedule, we somehow managed to catch a few minutes with Youngy.

What was it like working with Jason PC again this time and what do you think of the album now it’s done?
Anyone who knows Jason knows he’s a pretty cool customer. We get along well with him and we’ve been working with him for a long time, since when we first started with King Parrot. We released a couple of songs and the feedback was really great. The whole album flows together quite well and I think it’s definitely the style of music that King Parrot plays. It’s not like there’s any hit singles or anything that. The whole thing fits together as a piece of music, as an album. I’m an album kind of guy. I want to hear the whole album, not just one song. As a piece of work, it holds up nicely.

How do you view the development of the band from the first album to where you are today?
I guess on the first album we were just walking around in darkness a fair bit. We were just having a good time, and I think you can hear that in the music. There’s grind and it’s intense but it’s also kind of fun as well. We were having a lot of fun when we were writing the songs. We kind of didn’t really have an agenda for that. We were like, ‘These are our songs, let’s make an album!’ With our second album we recorded it with Phil Anselmo over in his studio and when you’re recording with someone like that you feel a little pressure, but we’d only had Toddy in the band for six months and we wrote the songs when he first joined and we’d play a couple live but it all was still pretty new. And then we came straight off tour and went into the studio in the States and recorded it. With this new album, it’s been a couple more years of gigging solidly and playing 100, 150+ shows every year and when you go into the studio you’ve been able to road test some of those songs and you’re rehearsing a lot more and working on them a lot more. We had a couple of weeks where we were just in the studio writing, concentrating solely on new stuff and getting all that down. I think you can hear the improvement in the band and the improved solidarity within the musicians in the band as well.

When your band tours as much as King Parrot does, how do you manage to find the time to write and rehearse a new album?
In terms of the jamming, we would have to sit down and plot out one week where we could say, ‘Ok, let’s do this’. There was spots of time in between tours where we could start writing, or whatever. But when we recorded the album, we set aside three or four weeks where we could go into the studio and get it all down. We wanted it to be comfortable and relaxed and we wanted to be able to capture the best performances, so there’s no pressure really – until the end, the final mixes when we’re all like, ‘We’ve gotta get it done!’ But during the actual recording process, we’re just having fun with it. So it was great for us to be able to go into the studio and make ourselves at home and concentrate on putting down great performances.

It looks like you certainly had a lot of fun with that first clip that you did from Ugly Produce.
Yeah… yeah that was awesome. The video brains trust put together the idea and we reached out to the Fetish House down here in Melbourne and they were into it. They were keen to do it and a couple of them were fans of the band so it all worked out really well. We weren’t content to just going in there and making a spanking video, which would have been quite simple to do but we also wanted to do a story with it, which we like to do. We like to have fun being creative in a different kind of way than just playing music. It’s part of what King Parrot does now – well, it’s something we’ve always done. There’s no rules as to how you have to be in the band, there’s nothing to say you can’t do that. We like to do something that we all like doing apart from playing music and touring and we all like making really stupid videos and having fun doing that. We’ll continue to do that and have fun with it. They are always a lot of fun to make, that’s for sure.

The thing about King Parrot clips is that they’re so entertaining you don’t need to like the music to enjoy the videos.
I think over the course of the band, they’ve helped us to open up to a wider audience. I think you find that at King Parrot shows, there’s lots of metalheads but there’s also people into rock music and people into punk music. It sort of crosses over into different genres and I think that’s helped them get into the music. They’ll think, Who the fuck are these guys? And they might want to come along and check it out live, and then they get to experience the live aspect as well, which is pretty confronting and over-the-top. Which is another part of what we like to do. Put on live shows that are totally berzerk that have people step back and say – What the fuck? Then after the second or third time, they’re going off just like everyone else! So there’s different elements to our band that add up to a different whole and that’s something that we’re proud of and that’s something that we’ll keep striving to make better as well.

How is the foreign reaction to King Parrot these days, as you’ve been overseas quite a few times now?
This tour in the States was our ninth tour over there, I think. We’ve done lots of stuff overseas and it’s been really awesome. We’ve been lucky to get the reputation we’ve got so we’ve just got to keep building on it. Playing the sort of music that we do, it’s extreme and not flavour of the month sort of stuff. It translates really well with the Aussie audiences, but overseas in Europe we’ve got to work really hard and applying ourselves to the band and we’re not going to go away and we’re just going to keep doing it the way we’re doing it and not try to compromise anything or veer from our path. We’ll stay true to our sound and the way we’ve honed our own style that’s steeped in that Aussie underground sound that developed in the 80 and 90s and early 2000s.

We wanted to create our own version of that and stay true to that, and I think we’ve been able to do that by bringing in elements that make it uniquely our own. I’ve always found that a lot of those bands we’re really influences by, bands we grew up with as kids, never really got the chance to tour overseas. I really loved those bands, bands like Damaged and Blood Duster, Abramelin, Alchemist, In:Extremis… they didn’t get those chances to get overseas as much as we’ve been able to and I’ve always thought that some of those sounds were so awesome and unique that they deserved to be on that platform. It’s been one of my dreams to have a band in that vein that was able to push it out internationally, and I’m really quite proud to be able to do that. It’s not easy. You’ve got to work overtime on it all the time and push it hard all the time, but that’s what we want to do. That’s what all the guys in our band want to do, so after three albums we don’t sit around a table and say, ‘Hey, do we want to take time off work to do this tour?’ We just say yes. We just do it and worry about how we’re going to pay for it later. We’ve had incredible support here in Australia. The fans here are the ones who’ve made it possible for us to branch out overseas so we’re extremely grateful for the situation we’re in.

How do you see the local scene going at the moment?
I think the local scene is as strong as it’s ever been. There’s a lot of great bands coming through at the moment. The two bands we’re going to tour in December, Disentomb and Pagan, are just awesome bands, both from different genres and both awesome in their own right. I’m really digging Cursed Earth from Perth, and there’s just so many great thrash bands coming through the Melbourne scene. A couple of bands I worked with like Black Rheno from Sydney and Daemon Pyre are doing great things up there and the Queensland scene’s doing really well too. It’s really flourishing. The bands are seeing that it is possible to get overseas and it is possible to get out there and tour and you can do it if you set your mind to it and you do things the right way. I’m proud to be part of it. It’s really cool. Probably ten or twenty years ago it wasn’t happening on this scale, and now it is and hopefully people will continue to get out there and support the local bands and the bands coming through because that’s what it’s all about. You have to have the support here so you can go over there and do it. 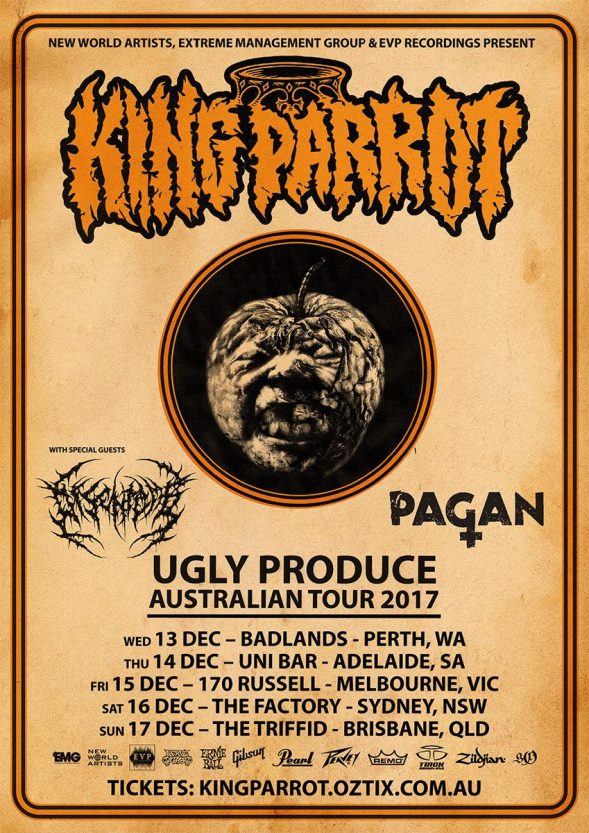