“We weren’t going to get back together as fifty year olds and play some shithole punk rock dives,” declares L7’s Donita Sparks down the line. “We’re too old for that shit! We’re very grateful that we left a mark a while ago, we paid our dues a while ago, and now this is like a victory lap.”

L7 arose from the late 80s California punk rock scene as the waves of grunge began to crash on the world’s shores, riding that wave and eventually transcending it to become one of the most notorious acts of their kind. Their third album established them as a force majeure in a scene that was suddenly flooded with angry punk rockers again. Bricks are Heavy is still regarded as one of the 90s finest rock albums, and earned them a following that crossed over into metal circles. Pleasant and gracious in conversation – she apologises for her previous interview with Vice running over time – Sparks is thankful for the fandom from the metal crowd in a way that some other self-declared punk musicians haven’t always been.

L7’s popularity/notoreity has enabled them to come storming back for their ‘victory lap’. Their acceptance across genres has meant that they can fit into any bill, and not feel like they’re out of place there.

It is, as she rightly points out, a strong position, and one that has validated their decision to get back amongst it after 13 years. Other bands come out of retirement to fulfil latent recording commitments or pay off debts. Ever faithful to the independent spirit that always drove them, Sparks reformed L7 because people wanted to see them back together again. There was no other agenda.

“We didn’t intend to reunite,” Sparks affirms. “It just happened. We don’t have a big power machine behind us, we don’t have a big management team behind us or a record deal or anything like that. We didn’t do it to make a record. We just did it because our fans wanted it to happen. I made all the phone calls to all the band members; there wasn’t a manager making the phone calls. It was all very DIY, so we’re very lucky that we’re this very self-sufficient island that’s getting to float around. Very much independent from anybody.”

L7’s rise to prominence was aligned with the late 80s/early 90s punk resurgence that grew from grunge, and also co-incided with the riot grrrl movement – headed up by Bikini Kill – with which L7 was often mistakenly associated. Like the early days of punk in the 70s, the early 90s was a particularly prolific period for female musicians. Festival bills were bolstered with female-dominated acts like The Breeders, Hole, Belly, Bikini Kill, Babes in Toyland and others.

“The grunge era… one of the strongest legacy points is how many women were playing in bands at the time, crossing over. We crossed over into metal, we crossed into art, we crossed into a lot of places.” Sparks is referring to L7 specifically, but her words could include many of the other women who were rocking at the time. “I think that that’s a little bit rare these days, that that happens.”

Twenty years on from those heady days and Donita Sparks believes that L7 has long since transcended gender issues. Any problems they did face usually didn’t come from other performers. In the end, of course, it all boils down to the music.

“From our perspective, we’ve always been treated with a lot of respect from guys in bands. It’s usually the suits that are the squares,” Sparks says with a laugh. “You’ve gotta have a good band, first and foremost. Whether you’re male or female, or an alien, you’ve gotta have a good band. Once you have that, I don’t think people care whether you have a penis or not.” 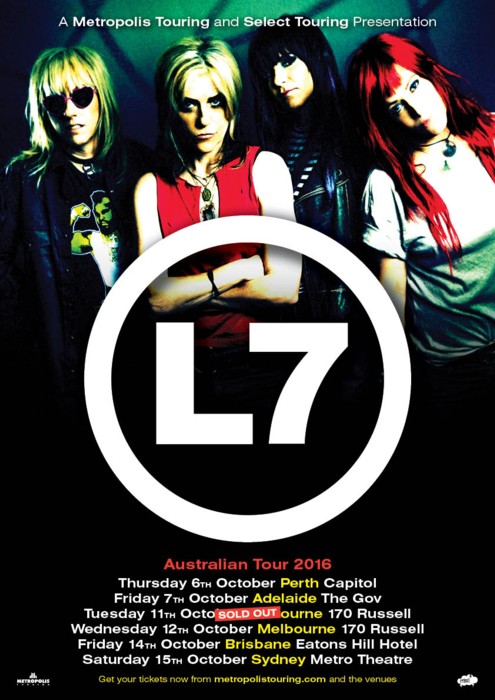