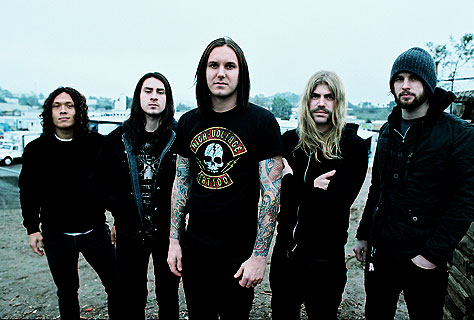 As I Lay Dying: A Decade to Rise

Home > Features > As I Lay Dying: A Decade to Rise

Some bands might opt to celebrate their tenth anniversary with a batch of half-hearted reissues, a videos collection or a spate of high-profile birthday gigs. Maybe they’ll even release a live album and DVD from said shows amid a period of relaxation and self-congratulation. For American metalcore heavyweights As I Lay Dying it’s a different story though; they just keep working. The quintet will spend the majority of the remainder of 2011 on the road in support of latest (and in this scribe’s view, career best) release The Powerless Rise, really only taking a proper break to intermittently pop into the studio to finish a special anniversary EP.

While unable to reveal too many details about the aforementioned release, guitarist Phil Sgrosso is audibly enthused about the project and the effort that has been devoted to it.

“It will have a few original songs, covers, some remixes and some old mixes,” he enthuses. “It’s just an assortment of songs to come out this year to celebrate the anniversary of the band. Now we’re in the mixing phase and hoping to have that out by the end of the year.”

Perhaps the recently online only release of their cover of Slayer’s ‘War Ensemble’ (included on the Homefront video game soundtrack, of which the limited run of 25,000 downloads were snapped up in less than a week) provides a clue of what the EP might contain?

“I can’t say too much yet, but it’ll have some classic metal songs and there’s a punk song we all love,” Sgrosso says. “We’re stoked on how it turned out and we think fans of heavy music will be pretty stoked on it.”

He continues to reflect on the band’s journey from the past decade; their 2009 DVD This Is Who We Are documented As I Lay Dying’s low-key inception to their current status as one of modern metal’s most popular acts, with well in excess of a million albums sold worldwide.

“I think any band that can last five years these days is a pretty big accomplishment,” the axeman says. “It’s my eighth year in the band and it definitely feels like an accomplishment. We’re still progressing as a band, making new fans and still playing music and making a living from it. It’s a dream come true; I never viewed myself doing anything other than music. I guess it worked out,” he laughs.

The winning new fans part appears to be on the money – the more aggressive and inspired The Powerless Rise (the meaning of which Sgrosso describes as, “Feeling like you have no worth and breaking through that and prevailing’) debuted in the Top 10 on the US Billboard Chart last May and the band continues to tour everywhere possible.

“Everything has been doing good,” he says. “The fans are becoming more receptive. I think in the beginning fans didn’t know what to expect from the album, but now they’ve had some time to sit with it.

“’Condemned’ is one of the new songs the kids can really get into. It’s pretty melodic and aggressive, but with some hard-hitting parts. ‘Parallels’ has done pretty well. ‘Anodyne Sea’ is probably the best one and was probably one of the most exciting songs for us to play from the new album. When we hit that song in the set, the energy shifts to this different feeling; it’s fresh to have a song like that in the set.”

On the touring front, while enjoying a hefty profile Stateside and in Europe and having carved an enviable reputation for themselves in Australia, As I Lay Dying hope to take it another level in April when they share the stage with hard rock titans Disturbed and metal darlings Trivium during the former’s arena tour of these shores.

“It’s definitely a lot of space to fill up,” the guitarist says of the size of the venues. “You have to put on a big show. We’re pretty used to playing clubs or big stages at festivals. We’re pretty stoked as we haven’t done an arena tour in some time. The day we got the e-mail saying Disturbed were interested, we were like, ‘that’s a great vacation right there’.”

It will also be a departure from the typical day-to-day operations of As I Lay Dying’s usual slogging it out on the road.

“We can travel comfortably from city to city. When you’re at their level, they like doing things comfortably. Our last tour in the States, we did 18 shows in a row. Everyone was starting to get sick and sore, but you do what you have to do to keep it going.

“This tour with Disturbed will hopefully open up new opportunities for us. We’ve stayed away from the Australian festivals lately as we had this tour happening. Making it back for a headlining tour late this year or early next year would be great.”