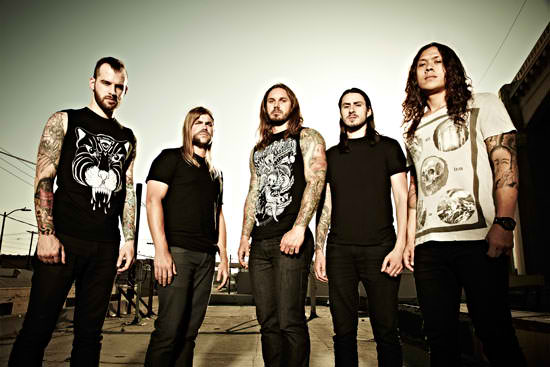 As I Lay Dying: No Wasted Words

Home > Features > As I Lay Dying: No Wasted Words

For the best part of a decade, San Diego’s As I Lay Dying have been one of the cornerstones of the metalcore movement. With overwhelming critical acclaim being showered on their sixth and newest album Awakened, it’s clear that the band have a long future still ahead. Loud recently touched base with drummer Jordan Mancino to discuss his favourite moments from the new album, most interesting tour memories, and when they’ll be back Down Under…

Hey Jordan, nice to chat with you again. You must be pretty happy with the latest album. People are saying it’s the best thing you’ve ever done.
Thanks man. I feel the same way and I know all the rest of the guys do too. We’re really pumped about it. It genuinely reflects all five members and just that quality alone, I think, is something special to us. It’s just turned out really well.

What was the thought process like going in to record this time? Did Decas give you some breathing space leading into recording Awakened?
It was just one of those things we wanted to do for our fans. We thought is was going to be fun to just record a couple of originals that we had been sitting on and the covers and have some guys do the remixes. We did it to enjoy it. But we did have a lot of time after that to, I guess, take a little bit of a break from most things As I Lay Dying. We’ve been pretty relentless with touring and recording for… gosh, it feels like forever. So to take a couple months off and come back fresh and with a vengeance… I guess it wasn’t our motivation, but our headspace at the time was just very reflective. We’ve been a band for over eleven years now and we’ve matured and we’re getting better at what we do, and we’re gonna go make a great record. And that’s what we did. We basically just tried to hone everything that we’d developed personally and collectively.

You’ve also been a fairly stable unit as well. That has to help a lot.
Definitely. Functioning as a band is an everyday thing. I think we’ve all learned to function well together, recording so many albums together and finally having five members in a band that are actually in the band and want to be part of the band and part of the writing process. I think that’s been a huge thing. Especially having Josh (Gilbert) in the picture with this album, on the ground floor. He was a huge part of this, writing this record. His level of confidence has been building since he got in the band, and now he’s comfortable with where he’s at in the band and he’s able to contribute. It’s tremendous. It’s been good.

With all the touring you’ve done, is there one that you recall as your favourite? Has there ever been a place that, perhaps, you’ve maybe preferred not to play?
I can’t say there’s been a favourite. I just love touring and playing. And we’ve played some really bizarre places. One of our early tours, back in 2002, I think, we played this show in Florida, and the show was originally meant to be at this skate shop… there was meant to be about six or seven bands, something like that. Anyway, the shop owners in the shops next door complained and the cops came because there was all this noise and stuff. And at this show there was probably about fifty people there. The show was getting shut down and we hadn’t even played yet. This dude goes, “I work in a reptile store. Let’s go and play there!” So we grabbed the PA, everybody grabbed all their gear and all the kids at the show drove for, like, a mile to this reptile store. We were picking up all these terrariums with snakes and tarantulas and moving them out the back so there was space for us to play. Then we just rocked out! It was so much fun. We’ve never turned down a show as a result of poor conditions or whatever. Those are some of the best shows. You’ve got a memory of some special time.

What plans do you have to come back to Australia again, because you are certainly very popular here.
There is definitely a plan. Unfortunately, scheduling and timing and all that other stuff, the opportunity just hasn’t been there. But something is definitely in the works. It’s not confirmed yet, but we’re definitely going to be there in 2013. Australia’s one of those places where… we’ve never turned down an offer for an Australian tour, because we love it so much. A lot of stuff’s going on and sometimes we don’t get to be everywhere we want to be at the time we want to be there. We have to be patient and find a good time to get over there and give our fans the show they deserve.

Is there anything that you feel you haven’t achieved yet with As I Lay Dying? Is there a place that you haven’t played yet that you want to get to?
Honestly, as long as we are provided with the resources to get where we need to get to play a show for our fans, and the calibre of show that we want to present in Europe, the US, Australia, everywhere else… we’ll play anything. We’ve played Sri Lanka. That was probably the most random place we’ve played. The show was awesome. There was 1700 kids there. It was great. We will play anywhere! We just love playing shows and going to exotic places and playing to our fans. And it’s cool to go to places that don’t often get shows, because the fans and so amped that you actually came. It’s the same thing with different cities, in the US and Europe too.

Do you have any personal favourite moments on Awakened?
Well I won’t say favourite, but when I listen to them over and over, the two that make me feel special are “My Only Home” and “Wasted Words”. Those are the two tracks that, I mean, for me personally, I think were well captured – although I think all the songs were captured really well. That, and “Defender”. I love that song. The songs that stand out to me are the ones that, I feel, are more spontaneous, and it’s always cool to capture that vibe of spontaneity in the studio and the writing process.

If you had to pick maybe three songs that you were going to use to showcase As I Lay Dying for someone, which songs would you pick?
It depends on who I was showcasing them to! (laughs). Probably the three that I just mentioned.

Well obviously as we mentioned earlier, you really believe you’ve nailed your sound and style on this album, so it makes sense you’ve chosen three new tracks.
Well you know when we go in the studio to write and record, that’s our goal. To make sure that this record is the highlight. The new highlight. I think that’s what most bands definitely try to do. Some succeed. Some don’t. With that mindset. I feel the balance with this record is spot on. Combining our core sound as it has evolved over the years, but also being able to reflect on those moments on past records that made those moments so special and trying to recapture those as well. As an artist to progress and to feel genuine about what you’re doing, and not just regurgitating the same record over and over and over again, it’s a balance that you have to find. I’ve captured it moreso this time than we ever have.

Thanks for your time. Anything final before we let you go today?
We’ll be out in Australia soon. Thanks to all you guys for your support!