Less Than Jake: Sounding the Alarm

Floridian ska punk mainstays Less Than Jake are celebrating their 25th anniversary in 2017 and are heading out to Australia in October. As he recovered from a storm that ruined his vacation, drummer, lyricist and founding member Vinnie Fiorello gave us a few minutes of his time to chat about how it all started and what’s kept them together this long.

Hey Vinnie, how are you doing?

I’m doing all right man. We’ve done a string of shows, got a little time off, I tried to vacation but the weather’s been shit, and on Monday we start a European tour. So we do a bunch of festivals and good vibes, so I have nothing to complain about.

I’ve heard some of the weather in Europe hasn’t been that good either.

Well I’ve just been through a tropical storm while I was vacationing. I was in Florida and it formed in the middle of the night and hit land in the morning. I was like, “Really? This is amazing!” Europe’s a real crapshoot for weather. You can be ankle-deep in mud one day and then it can be super hot and dry and it feels like you’re in a fucking desert the next. And you’re only six hours apart, right? I’m excited to go regardless. We have a day off in Budapest, and we had never gone until last year and now it’s one of my favourites cities. So I’m excited about that.

Of course you’re coming to Australia again soon too.

Yeah man, it’s gonna come up and bite everybody on the ass real soon.

What are some of the memories you have of touring here?

Here’s the thing about Australia, and no matter what anyone says, whenever someone says ‘What do you think about Australia?’, Australia feels like Florida. The first time I went there, it feels comfortable. It feels like home. But Australian people are always up for it. Up for a good time, so I always look forward to shows in Australia because there’s always good people there who are there to have a good time.

Has it been a good 25 years for you? There’s been a few comings and goings but Less Than Jake’s been a pretty stable band over all the time hasn’t it?

Yeah, it really has! We’ve had the same core members, four members, since the beginning and the fifth has been around for 18 years.

You all get along together pretty well then!

Yeah. You know it’s a pretty brotherly thing. You get along like brothers. If somebody gets in a mood it can rile everyone else to get a little wacky and sometimes, in the earlier days, it would start a thing that would get mad and bad. But now I just laugh – “You’re mad, so you want to make everybody else mad!” That’s cool, that’s a brotherly vibe, the stage that we’re in. We don’t always agree and we don’t always get along but we would all take a bullet for each other regardless. That feels good, man. That feels good, to be able to still be creative after 25 years and write new songs and still be able to tour the world, still be able to be with your friends, still not feel like a total pile of shit when you get up in the morning.

After all that time, you need to stay creative of course.

You have to or you die. There’s plenty of bands that have been around as long as Less Than Jake but somehow they just relegate themselves to a legacy act, where they don’t have to do new music and they just play the songs that they wrote back then and just ride with it. Less Than Jake was never designed to be like that and never will be. We’re more creative now than back when the band first started, so I would think that it’s more about being able to write inside the weird shaped box that we have ourselves in called Less Than Jake.

Getting out there to play and tour helps to spark that creativity too, doesn’t it?
Of course. I wouldn’t be the person I would be lyrically, musically, artistically, if I hadn’t set foot on all the places I’ve set foot on and met the people that I’ve met around the world. It’s great to be in a band this long because I’ve got to know specific parts of Melbourne, Australia or Sydney, Australia where there’s a great flat white or a great bar we go to. At that point, you just know those places because you’ve been there, they’re familiar and you just become able to absorb more.

Which is the Less Than Jake album that you look back upon most fondly?

You know what, I’m going to go with Pezcore. It was our first full length, we didn’t know what we were doing, we didn’t really know how to write songs, we didn’t know anything. We were floating in the middle of this water, this unchartered water because when we were doing that record, ska punk really didn’t exist. It existed in the form of, certainly, ska like The Specials or The Clash, but it didn’t really exist beyond maybe three or four other bands that we had heard, so here we are looking into the abyss at a genre that was absolutely new and fresh and we had no idea what we were doing. We didn’t even know if people were going to like it. We just wrote songs and happened to be able to play them locally and get a following and then play out of town and get a following there, and build up from there. But early on, we didn’t know what we were doing. Pezcore is a record that I look back on and go, You know, what a shot in the dark that was for me to be able to do that record.

It obviously opened up a lot of doors for you personally beyond the band also, because you’ve run a label (Fuelled by Ramen) for most of that time as well. What is more difficult, being a label guy or being a drummer in a band?

Being a drummer in a band. Our band is a democracy where there’s five individuals with five individual tastes, five individual creative viewpoints. For me, if I want to do something labelwise, if I like something then I can do whatever I want to do about it because that’s my opinion and my opinion means everything in the scenario that we’re talking about. With Less Than Jake, I might have my opinion, but the four other people in the band might go, “We don’t agree with you at all”. So, everyone starts at ground zero. It’s definitely easier to do the label side than it is being a band because being in a band, unless you’re a solo artist, being in a band is a democracy, it’s about communication, it’s about chemistry, it’s about listening to the other people that are in there and then coming together in collusion for a song and then putting all your passion behind it after you talk about it. Music is very weird in a band like Less Than Jake. It’s half creative and half psychological. You have to talk about it and you have to go to the Less Than Jake meetings and bring up a song, and that’s why I think our band’s still around, because we can leave it all on the table and talk about it and work it through on the stage as we’re playing.

So what’s the next release for Less Than Jake? You did an EP recently, so will there be an album soon or maybe another EP, as that seems to be the thing at the moment?

What we’re gonna do is start writing… separately people have started writing, then we’re gonna come together in September, we’re gonna fish through some ideas, talk about whether it will be a full-length, but it will definitely be out in 2018 sometime… maybe a full-length, maybe an EP, maybe a single – I don’t know. I know that 25 years in, we’re not bound by any obligation to do anything other than write songs that we feel passionate about. If that’s in EP form, that’s cool. If that’s in full-length form, that’s cool. 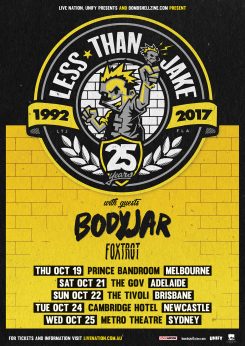