“Good records stand the test of time,” declares Living Colour bass player Doug Wimbish. “And the result of that is we get to tour Australia and NZ and do a gig!”

It’s been thirty years since Living Colour released their debut album, Vivid, and while Wimbish didn’t actually join the band until several years later, he is in no doubt about how powerful and resonant that record is to this day. Written during the turbulence of the late 1980s very much as a reflection of the times, Vivid – musically and lyrically – is just as potent and relevant now.

“Those songs were written about a reality that was taking place in a world that we were all living in,” Wimbish says, “in the environment that we were in at the time. You look at it now, they still stand the test of time. They all still hold up, and it also created a great platform for the band to be able to move forward. There’s no denying – great record, great band, great frequency, and it came out at a great time. Fast forward, and those songs, on Vivid alone, could have been written yesterday, in that precise detail.”

At the time, Living Colour was a revelation, an all-black rock band whose music was a combination of Hendrix-style hard rock guitar blended with funk, jazz, blues, metal and hip hop, a deeply inventive cross-pollination that hadn’t quite been heard before. The album riffed on politics, racial stereotypes in the music industry – which the band by its very existence was challenging – and other socio-political-economic aspects affecting the world at the time. Lead track ‘Cult of Personality’ was a huge hit; thirty years later, it’s a song that resonates even louder than it did then.

“The narrative that took place with that recording is still alive now, thirty years later. It couldn’t be more real now than it was back then. Especially here in America with everything that’s going on.”

When Living Colour first burst out of New York, the idea of a group of black men playing heavy rock was almost unheard of, an anomaly at a time when rock in general was perceived as music for white guys. It was as if no one remembered – or cared – that rock had come from black music in the first place.

“Sometimes you see something or you hear something and you know it comes from another place that you’ve ignored,” Wimbish says. “Everything has a reality and you can embrace it and try to deal with it, and at the same time there are some people who are like, ‘Come on, just leave it alone. We don’t want to talk about that!’ And that’s how stories get sideways. Rock and roll goes back to early blues, and that goes back to Africa and to the mouth of the Mississippi River and the Depression and slavery… those old blues songs – they weren’t written by Walt Disney! It wasn’t Mickey and Minnie Mouse writing those. Fast forward to Living Colour and Vivid, and that was a narrative about the conditions that were going on at that time.”

Narrative is a word that Wimbish uses a lot to describe the music of Living Colour and the band’s creative process. Latest album Shade, their sixth, explores the relationship between the music of today and its roots in the blues, and by extension, the band’s own place in that story. To help tell it, they included covers of Robert Johnson, Marvin Gaye and the Notorious B.I.G., all of whom have connections to the blues.

“How can you see a song like ‘Who Shot Ya?’ by Biggie Smalls being tied to blues?” he asks rhetorically, as he talks about the band’s mission for their new album, which took them six years to create. “How do you see a song like ‘Open Letter (to a Landlord)’, how do you connect the dots? Well, it’s all the DNA that lies within the structure of music that has the roots of blues. Our goal was to have this conversation and connect the DNA of blues to rock, funk, reggae, hiphop, RNB, country-western, dance, industrial, metal. All the DNA is there whether its coming from storylines or chordal structure, whether it’s coming from the beat, because everything tribal, and nothing’s more tribal than the drums. We started to try to find alpha and beta connectors that work together. And why do they work together, and what is the narrative for that?”

Shade is a lesson in both the history of modern rock and a statement that little has changed socially and politically since the band’s debut. The number of black musicians involved in heavy rock are still small and groups like Living Colour are still looked at askance, like some kind of novelty. Thirty years on, the band finds itself making the same statements they made on Vivid. Perhaps it would have been easy for them to simply re-interpret that landmark for the new century, but Living Colour isn’t about doing things the easy way.

“It’s easy to continue to do something that’s safe all the time,” Wimbish asserts, “cut a song and then cut another song and hope to become successful, then you start to get caught up in the game. You’ve got to come out of your comfort zone in order to do things as a collective unit. That was one of the key things that Living Colour’s always managed to do. It didn’t come easy! We were always trying to be pushed back in to doing ‘Cult of Personality’ over and over again.”

Living Colour is a special band, a group that has pushed boundaries and smashed genre-barriers with sheer talent and a unique creativity that draws from their love of music of all kinds. While they may have only released six albums in thirty years, Doug Wimbish is proud of each of them for being genuine and for being with a band that makes music on its own terms.

“We were able to come to an alliance of all the different frequencies that we have as individuals, we’ve been able to put it together as Living Colour. Vernon’s a completely different person to me, as is Corey. We like different things, we like a lot of the same things, but what we try to do it keep it real, always. All bands are going to have their differences of opinions, but we play the music brother. We play from our hearts and we challenge ourselves. I’m happy about that. We’ve done six records and an EP over the time – not a lot of records, but all of those records are meaningful and have purpose and truth and honesty.” 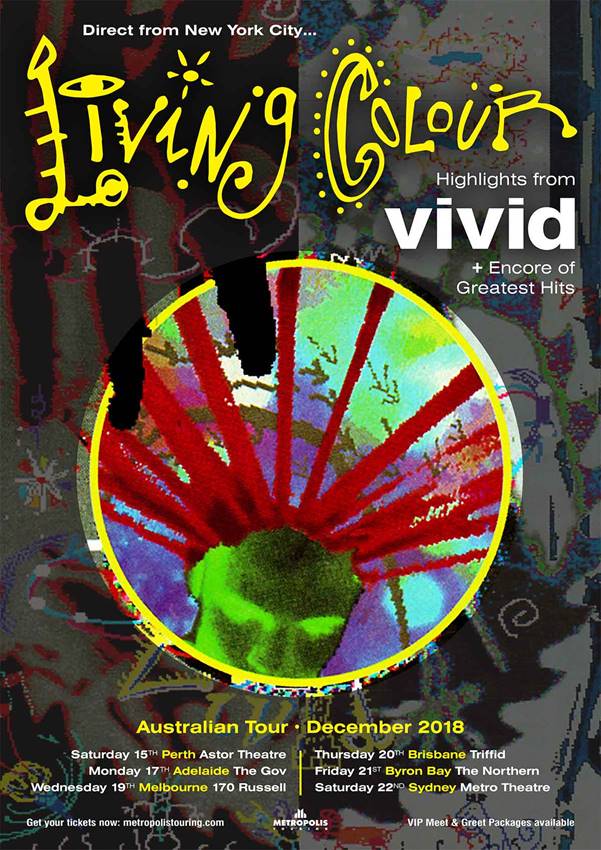