It’s towards the end of an interview that’s covered internet trolling of the latest album, the nature of the metal scene and the importance of integrity. Then we get to the subject that can’t be avoided any longer: the death three days before of Vinnie Paul.

He and his friends managed to get backstage and the first guy from a band they ran into was VInnie.

“I got to talk to him for a few minutes. I told him there was a few Ratt licks in there – a few Warren De Martini from Ratt guitar licks – and he just grinned and said, ‘Oh shit, really? You picked that up?’”

Machine Head and Pantera would tour together in the years to follow, and Flynn’s band would host Hellyeah later on.

Flynn’s affinity with the Abbott brothers runs deep. Machine Head’s Grammy-nominated ‘Aesthetics of Hate’ was a ferocious response to journalist William Grim’s withering excoriation of Dimebag in the wake of his murder.

“You know it just came out today,” he continues sadly, “that he had a heart attack. 54, man. Way too young. [The band] were all together when we heard the news. It’s hard to make sense of it. He did so much for the worldwide metal scene.”

Machine Head’s first album Burn My Eyes marked them as a rising talent during the Pantera-led revival of metal across mainstream America in the fallout from grunge. Three albums later they hit hard times before first Through the Ashes of Empires and then 2007’s enormous The Blackening returned them to the spotlight. Yet while that album is now seen as a pinnacle of the band’s career, Flynn remembers that it was critics, not the fans, who were the first to really embrace it.

“The critics really loved that album. At first it was the fans who were really slow to get on board. I think it took probably about three years before people started talking about it as a great album or our best or whatever.”

The Blackening won almost unanimous plaudits across the music world; by contrast, Machine Head’s latest release Catharsis has suffered the slings and arrows of heavy criticism. Along with metal flagship publication Decibel’s evisceration of the album, critical appraisal has been mixed to say the least. This very website came down hard on it as lacking cohesion and sites like Blabbermouth and Loudwire were similarly ambivalent. His public rebuke of Decibel aside, Flynn seems more annoyed by the anonymous negativity from Internet trolls in flame pits like YouTube and Facebook.

“You know, we get the figures back from these things,” he says. “Most of the people who commented on the videos we put up on Facebook or YouTube or whatever… they only watched the first fifteen seconds of each track. They would watch that first fifteen second, and then they  make some comment and they never went back [to watch more of it]. And for some reason those are the comments that are still there, getting the biggest response.”

His tone is tinged with ironic amusement. He smiles.

“You know,” he goes on, “I could have said that. Bands lie all the time! But I wouldn’t be able to have looked at myself in the mirror every morning if I had said that Catharsis was our heaviest or most brutal.”

Regardless of the critical reaction, Flynn and Machine Head seem to be having the last laugh. Catharsis is now their best charting album internationally, the first to crack the Australian Top 10 and peaking at #3 in metal-mad Germany. The subsequent tour is now gearing towards being one of their most successful ever and the new material is being heartily embraced every night.

Thirty-three years after beginning his career in an embryonic version of Bay Area thrash band Forbidden (he left when they were still called Forbidden Evil), Flynn admits to being at a loss about the current state of the metal scene. Where once the differences in styles and genres were often little more than aesthetics, vocal styles and the speed of the music and crossovers were common among groups of fans and musicians, these days it has become increasingly problematic just to pin down what metal is and isn’t. Entire sub-genres have become scenes unto themselves, shunning other forms and being shunned in return.

Australian audiences will get to feel the Machine Head assault once again from early July. Judging by the enormous set-lists coming out of their recent bout of touring, local crowds are going to be in for a very solid battering. Robb Flynn is looking forward to dishing it out.

“Aussies crowds are just awesome,” he declares, “because you just get so loud and love to drink. It’s always fun coming down there.” 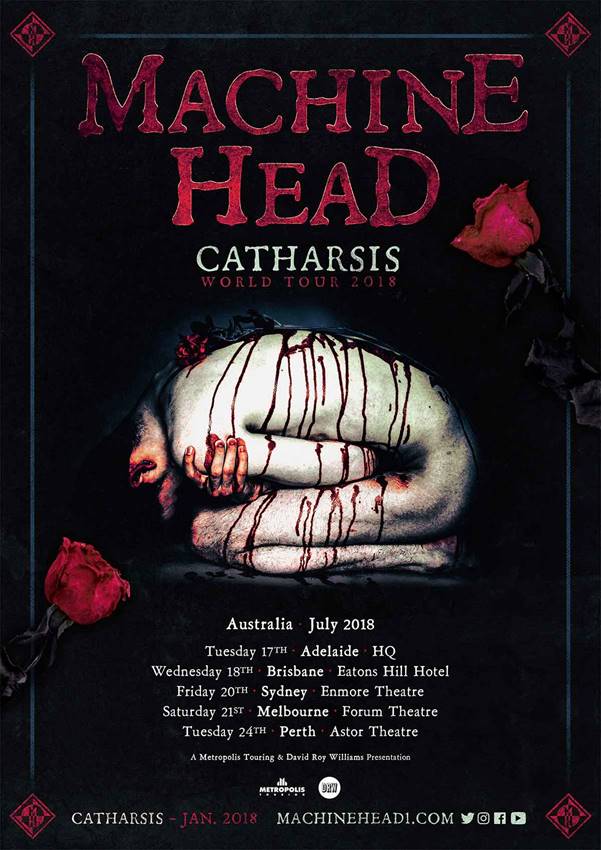