The Mark of Cain: Standing Alone

In August 1989, an audaciously heavy-hitting trio dropped their debut album onto a mostly unsuspecting world. Battlesick was brewed on the stages of Adelaide by The Mark of Cain in the days when the pubs were filled with live music any given day of the week. It was a brooding, bruising exploration of the bitterness of isolation filled with the clamour of militaristic drums, repetitive, pummelling stop-start riffs, immense bass grooves and the barked, unsung vocals of John Scott. The Mark of Cain’s music was – and remains – powerful, intense and intimidating. Those early audiences often didn’t know what to make of them.

“When we used to play, it was really weird,” Scott recalls. “We used to get worried that… because the audience, if it had been dancing around or whatever before, they would just stop, and stand, and watch. And we’d think, ‘OK, this is pretty fucking bad!’ But after each song there’d be a pretty strong round of applause, and it would be really weird. We’d get a lot of musicians who’d come to see us, and I can remember those times. These days, yes, there’s a mosh happening or whatever, but back then – everyone would just stand there and watch us.”

Australia’s pub rock phenomenon was still in full swing in the late 1980s. The Adelaide live music scene was as fertile as that of the other cities, allowing The Mark of Cain to hone their crushing and precise sonic attack.

The scene was a strong and supportive one, Scott recalls. The Mark of Cain slotted into a group of other heavy-hitting acts that proliferated at the time, gigging together and helping each other with shows.

“There was a pool of bands that all knew one another, and I’m talking tons of bands. So we would play if a band we knew would ask us to support, or we would ask a band to support us if we were playing. There wasn’t much vying for who was going to get in here or there. It was a really different vibe back then, and we played with tons of different bands, but it was generally bands of a similar ilk. Not that there were any bands doing what we did, but we all sat within that thing that became known as alternative. Even in 86, it was called grunge.”

Few would refer to The Mark of Cain as a grunge band these days; out of all the sub-genres of heavy rock people have struggled to assign to them, grunge is one they have never really worn, and the idea they might be metal always make John Scott chuckle grimly.

“If there’s someone who doesn’t know, they’ll say, ‘What does this band play?’” Scott says. “If anything, I call it heavy rock. That’s the best I can do. I don’t class it as metal, it’s not punk, it’s not hardcore. It’s just got its own thing.”

From the outset, the band stood alone, outside the scene while existing within it. Not quite fitting in anywhere except their own space. On stage, their close-cropped buzz cuts and Rickenbackers set them apart, just as their sound was different to anyone else’s. The Mark of Cain has always held to the vision of its creator.

“I’ve always had an idea of what the band would be about,” Scott explains, “and it’s always been that loner, outlier, outsider, whatever you want to call it.”

Battlesick epitomised their bleak aesthetic, from the stark cover art to the bludgeoning musical assault and Scott’s dark, Kafkaesque lyrics. Originally pegged to be released through Sydney’s Phantom Records, the album instead became the first release for the Adelaide-based Dominator label whose co-founder, Aaron Hewson, would later join The Mark of Cain. 30 years ago, it wasn’t as simple to get files and recordings across the country.

“It was just easier then to deal with something in Adelaide. We didn’t have to deal with the whole distance thing. There wasn’t any emails or anything like that. It was all making phone calls and sending packages.”

With that first album, the band’s reputation was solidified and the hard-working, hard-hitting trio soon found themselves being showered in praise from punk luminaries Steve Albini and Henry Rollins. Both men would go on to work with them in producer roles for later releases.

“Steve Albini,” Scott says, “we’d played with Big Black, and there was a meeting. He was always like, ‘Wow, dug your music. I want to do something’. And he kept to his word.”

Their relationship with the unpredictable Rollins also came out of playing shows together. The usually elusive vocalist even interrupted his regular pre-stage routine to watch their set. Scott takes up the story.

“We ended up playing with the Rollins Band in 92 or whenever it was, after he said he was never going to play Adelaide again, and that was another thing where, after we finished playing, the guys from the band came by and said, ‘That was great’. And then, at the end, when everything was over, Rollins himself came out and said, ‘You know, we fucking see bands and tour with them all the time, all over the world. It gets very monotonous and some bands aren’t very good. This is one of the very few times we’ve really fucking enjoyed what you did’. He was saying he would usually limit himself to working out in the back room before he came out, and even he said he had to come out and have a look. That was great to hear. It was sort of validation, as well. We never went around asking anyone, ‘Do you think we’re good?’ But it was nice to get that validation.”

Rollins went on to produce their 1995 release Ill at Ease. That album proved to be a breakthrough release for The Mark of Cain, leading to radio airplay, festival slots, film soundtrack work and the extraordinary Rock and Roll experiment featuring remixes by people like Paul Mac and Justin Broadrick. 17 years later, the band would drag Rollins out of his self-imposed retirement from music and had him drop a spoken word into ‘Grey 11’ from Songs of the Third and Fifth.

“He said he wasn’t going to do any music ever again, and that might be one of the last things he’s been on, as far as I know. Because since then he’s been like, ‘Nope! Too old now’.” Scott chuckles. “Fucking hell!”

Age is a barrier for us all. For a relentless bruising machine such as The Mark of Cain, it can be even more so. The band’s previous run of shows had them playing for two hour stretches which John Scott admits were brutal on both the audience and the group. They probably won’t be on stage for quite as long this time out.

Just as they were after the last tour, the band isn’t definite about what they might do following this one. Scott says he thinks they might have one more album in them, “As a closer out, just to round it all off.” Next year will mark the 25th anniversary of Ill at Ease, so they might also do something special for that. But for now, it’s time to celebrate Battlesick and present some songs they haven’t played since it came out. John Scott assures us that it’s all sounding great, even if their drummer is younger than some of the songs are. He can’t wait to bring them to life.

“Some of it was muscle memory coming back,” he says of those early tracks. “Some of it was me going back and listening to it and going, ‘Fucking hell, what was I doing there?’ It’s weird, some of it just comes back. It’s all sounding really good. We run through the whole album and it’s sounding great. We’ve got Eli, obviously, on drums and he’s cottoned on to it because it’s all new to him. There’s some songs we’ve already played, so he knows ‘Battlesick’ and ‘The Hammer’, but there’s a whole lot more too: ‘Dead Man’s Mail’. I think he knew ‘You Are Alone’, ‘Visions of Love’, ‘Summertime’ – that’s a new one [for him]. ‘Call in Anger’. It’s been great, and the thing for me is, it’s sounding really, really fucking good in the practise room.”

If you know The Mark of Cain, you can be assured it will sound just as good live on stage too. 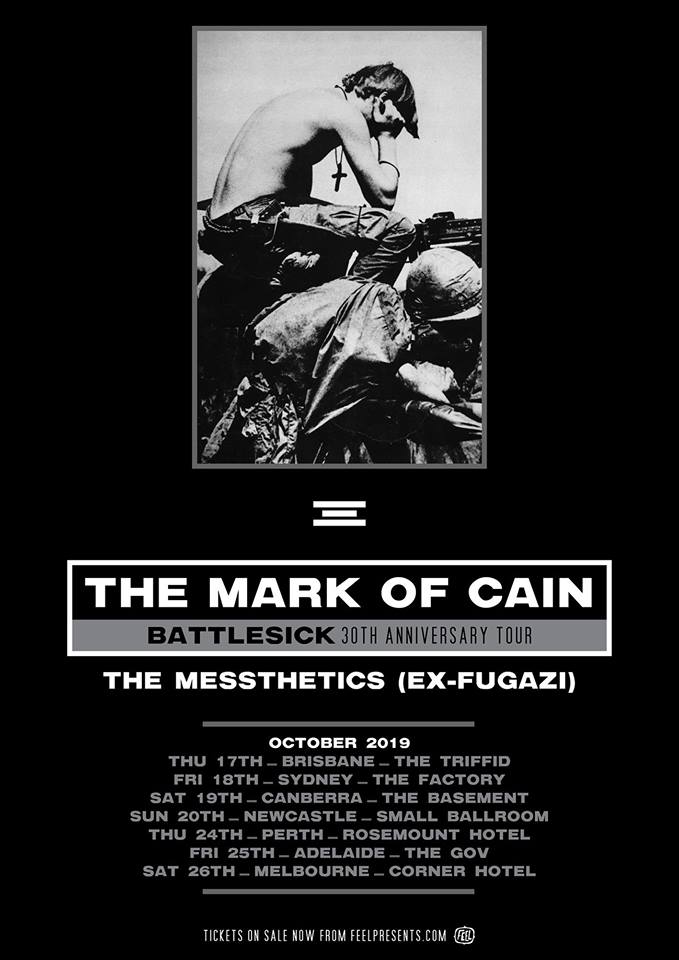