Max Cavalera: Arise from the Remains

This year marks the thirtieth anniversary of Beneath the Remains, the third album from Sepultura. Their first release for a large worldwide label, it showed the band maturing and finding themselves as they began the transition from underground metal warriors to one of the most influential bands of the coming decade. The shape of both Sepultura and the music they influenced has changed immensely since then, but Beneath the Remains stands as a testament to an era of metal long since passed.

“It’s a 30 year old record but it sounds fucking great, man,” says Max Cavalera with relentless enthusiasm. Over the years, his accent has softened, but not his passion for the music he began creating with his brother Iggor in Belo Horizonte, Brazil, in the mid-1980s. “Those two albums, Beneath the Remains and Arise, they are the shit. I just don’t know how to describe it. They are just so powerful and just so heavy, energetic and aggressive. We did a run of shows in South America and Russia and people lost their minds! They lost their shit! I think the same is going to happen in Australia. They are going to love this show.”

Cavalera’s latest venture re-teams him with his brother as they perform their 1989 and 1991 albums together in a show that will rival, if not surpass, last year’s live visitation of Roots.

“I’ve been telling people,” Max says, “if they like the Roots shows, they will love this one even more because it’s better. People are gonna love it. Especially the combination of the two records together, it makes the night more interesting, there’s more music. Two great records instead of one and a lot of metal, a lot of songs. It’s really really great. I don’t want to sound cheesy, but there’s some magic involved in that shit.”

The tour, instigated from an idea by Iggor, has already slayed audiences in Russia and South America. This week the show comes to Australia, a country with whom Max Cavalera has a deep connection. He has toured here many times over the course of his career and enjoys a large and loyal local following.

“Arise was the record we came to Australia [with Sepultura] to tour for the first time. It was great, we really loved it and it became, I think, a kind of love story with Australia. Australia and the Cavaleras in this great love story together,” he declares. “Through the years it got better and better – Soulfly at the Big Day Out 98 [it was actually 99] – great show. Killer Be Killed, first shows in Australia ever. Australia’s a special place. I have it in my heart. I have a lot of gold albums from Australia. Soulfly has gone gold, Chaos AD and Arise have gone gold in Australia, so I have a special place in my heart for Australia.”

Thrash fans also have a special appreciation for Arise and Beneath the Remains, both of which set benchmarks that remain to this day. Cavalera is quick to admit that these albums are “soundtracks to people’s lives. The fans know [them] really well.” With that in mind, he and Iggor had to make sure that the fans weren’t going to be disappointed. Each one was carefully relearned and, if it needed to be, each song slightly re-invented.

“The way we approached this album was,” he begins, “we took it very seriously and we learned them as best as we can and we even extended some songs so they sound cooler live. Some of the stuff like ‘Altered State’ is a bit longer, we made a new version of it. Some of the stuff we never played much live, stuff like ‘Slaves of Pain’ and ‘Stronger Than Hate’, ‘Primitive Future’, ‘Infected Voice’… most people remember the singles like ‘Inner Self’ and ‘Dead Embryonic Cells’, ‘Desperate Cry’ – the ones we did the videos [for]. When you play both records back to back like that, it’s very powerful man. It’s just a great thing.”

The project also afforded them the opportunity to re-examine the music they were making back then.

Most importantly, he’s happy and fortunate that he and his brother can still work together. Family has always been of great significance to the Arizona-based musician, whose brother and creative partner now lives in London.

“I don’t get to jam with Iggor all the time, but when I do it’s really fun, man. I’m so glad that my brother is still here. We’re both still here. We’re in good health and pretty good shape, but we’re here together, and it’s a blessing. Unfortunately we don’t have Dimebag and Vinnie anymore, so I’m very glad Iggor’s still here and we get to do this. Commemorate our life through the metal that we created.”

As mentioned, 2019 is the 30th anniversary of one of metal’s key albums, a record from an important period for the genre that also saw the release of the debuts of bands like Morbid Angel, Annihilator and Obituary. It was a time Cavalera recalls very fondly.

“Beneath the Remains came out in 89, so it’s celebrating thirty years, and there’s something special about that,” he says. “Something great about me and Igor coming back together on stage and doing those songs for the fans. There’s a very real sense of nostalgia that comes from some of those songs that takes people back to those years. It was really like the Golden Years of Metal, all the originals – Morbid Angel: Altars of Madness and Death: Leprosy and Scream Bloody Gore… that will never happen again. We are entering different eras now. That time will never repeat again, but we get a chance to repeat it! It’s going to be amazing.” 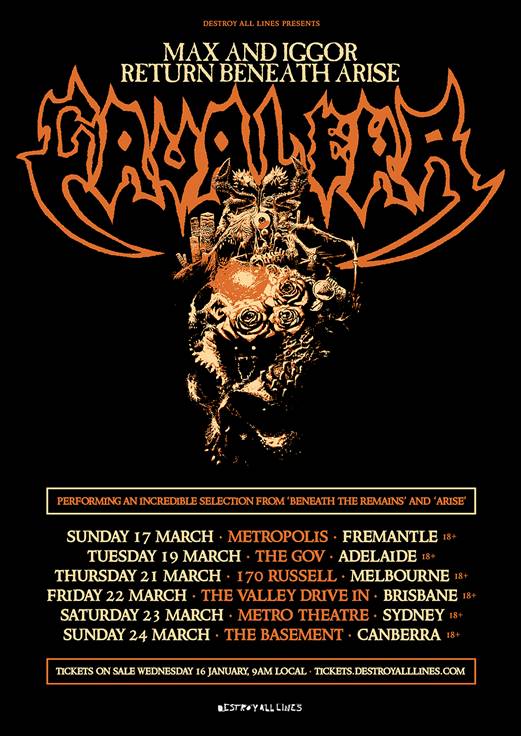