Max Cavalera: Back to His Roots

Home > Features > Max Cavalera: Back to His Roots

In 1996, Sepultura released their sixth album. Recorded in part deep in the jungles of Brazil, Roots focused its attention on the culture and heritage of the band’s native country and incorporated a wealth of new elements into their sound – tribal beats and native instrumentation, down-tuned guitars and nu-metal grooves – that brought them both acclaim and condemnation. Critics were almost universal in their praise, some describing it as a bold new step in the development of metal. Fans were far more divided in their opinions.

“A lot of people hated it,” admits Max Cavalera with a chuckle. “They didn’t understand it when it first came out. But there was also a lot of people who really loved it. I look at Roots as a fearless record. It was an album that was done without any fear of the unknown. We just held onto our guns and listened to our guts and went with it.”

Whatever thoughts a listener might have, Roots is certainly a unique album. It was more than a dedication to the people and culture of Brazil, it was informed by it. The band immersed themselves in the native culture of the Xavantes tribe, writing and recording a track with them and taking part in some of their rituals and Cavalera drew lyrical inspiration from events in the country’s past. In the two decades since it was released, there hasn’t been another metal record quite like it, not even the early Soulfly albums that the elder Cavalera would launch soon afterward.

“I think it’s a really cool, very uncompromising record. We did what we felt was right and went with it. It takes a lot of guts to do that, especially as a lot of fans just want the same old shit, you know? Once they like something, they only want that! They don’t want nothing different, they don’t want change. It was great to show them, ‘Ok, we love that, but here’s something else. Give it a try, and see what you think of this…’ Open their minds a little bit. I think Roots played a role in bringing metal to the new millennium.”

The immediate aftermath of the album’s release is ancient history now, a tale that looms larger than Roots itself in the chronicles of metal music. Tragedy and personal drama dogged the band from that point, and Cavalera never got to truly enjoy the singular masterpiece Sepultura had orchestrated.

“When we toured the Roots tour”, he says, “there was a lot of turmoil going on in our lives at that time and we couldn’t really enjoy the moment.”

Twenty years on, Max and brother Iggor are on a very special tour that will soon bring them to Australia. Return to Roots sees the siblings performing their landmark album live in full for the first time. It has given Cavalera a new outlook on Roots, on what they achieved and what it means.

“We had an idea to make a metal record with a lot of culture stuff. We have a lot of cool culture in Brazil and we wanted to show that to the world. And we created this album…  There’s never been an album like that before and I don’t think there’s been one since, so I think it’s a very powerful record. And now that I get to perform the album song by song, I appreciate it even more than I did when I created it; now that I’ve listened to it many times I have even more respect for this album than when we first made it.”

Roots was recorded in an era just before many of today’s digital studio tricks became widely available, meaning the band had to resort to a few very old school methods when it came to creating the sound they wanted. The experimental nature of some of the material has also made it necessary for the brothers to rework them to something they can play live. Max points out that changing things around a little helps to keep the set interesting, especially when they are playing the same songs each night of the tour.

“We try to get as close as we can [to the album version], but also something that works live. For example, the song ‘Ambush’ had some percussion that was done with Carlinhos Brown in a canyon and we glued the percussion on top of the song,” Cavalera explains. “It was before ProTools so we had to cut the tape and glue it manually. It was a big thing. Live, we just do the percussion, me and Iggor. We do a slightly different beat from the album, a bit more up, a little faster. On ‘Rattamahatta’ we made it a little bit different and ‘Look Away’ goes in a bit of a jam towards the end, so it’s a bit different every night, sometimes a bit longer, sometimes a little shorter depending on what mood we are in on the night. I think that’s what makes it interesting. We’ve created a show that isn’t clinical, isn’t robotic. We have to play the same song every night and that makes it exciting for us to play them.”

Return to Roots is something of a precursor for the upcoming fourth Cavalera Conspiracy album, which Max tells me is off to be mastered the day after this interview. Working with a producer for the first time under the Cavalera Conspiracy banner, he couldn’t be more proud of it. Having another set of ears in the studio made a world of difference, he says. Not to mention that it was recorded in what he describes as “a bunker, like Area 51” in the Arizona desert.

Three hours’ worth of riffs were cut down to nine songs and thirty-eight minutes of “really powerful music” they managed to pull off even though Iggor was suffering from a bout of flu for the entire recording period. The album includes a guest appearance from Justin Broadrick of Godflesh and Cavalera’s first ever guitar solo among other things.

“I’m very happy with it, the sound, the production and the material. We have one song with a guest, which is Justin from Godflesh. He sings on a song called ‘Hellfire’ and he sings like he did on Street Cleaner, old school Godflesh vocals, and it’s got drum machines a little bit like Nailbomb. I even do a solo for the first time, on a song called ‘Excruciating’. It’s full of divebombs and sounds like Slayer, which is great!”

As thrilled as he is by the current tour, it’s clear that Max Cavalera is perhaps even more excited by his next album.

“It’s a beast of an album. I would put it side by side with Arise any day,” he says enthusiastically. “That’s how proud I am of the record and how sure I am of this record.” 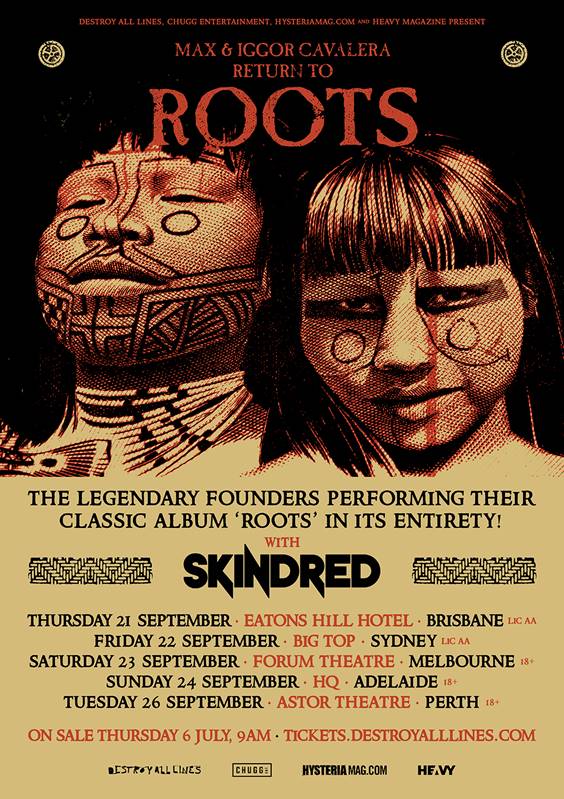