Mayhem: From the Dark Past

Home > Features > Mayhem: From the Dark Past

During 1990, members of the Norwegian band Mayhem, the pioneering act of the Second Wave of Black Metal, moved into a house in the forest near Oslo to begin writing and rehearsing for what was to become their debut full length album. By the time it was eventually released on May 24, 1994 two of the band’s members were dead and another was in prison for murder and a string of arson attacks against churches all over Norway.

The story of De Mysteriis dom Sathanas, perhaps the single-most influential recording in the history of black metal, is deeply mired in the violence and nihilism at the core of the Scandinavian extreme metal scene, a scene that played the genre’s anti-social and anti-religious posturing to the hilt, leading to intimidation, wanton destruction, suicides and murder before the flames burned out in the mid-1990s.

Mayhem’s creative axis, guitarist and scene figurehead Øystein “Euronymous” Aarseth and Swedish-born vocalist Per Yngve “Dead” Ohlin, had begun composing songs for the album soon after Dead’s admission to the band in 1988. Neither would live to see the album’s final release. In summation of a sordid tale that has been told, re-told, embellished and re-told again in the decades since, the mentally-disturbed Dead would kill himself on April 8, 1991 while alone in their rented house. Euronymous, discovering the body some time later, would exploit the singer’s death to promote Mayhem’s allegiance to its nihilist principles; in protest, founding bassist Jørn “Necrobutcher” Stubberud left the band, thereby allowing for the recruitment of Varg Vikernes. Two years later, on August 10 1993 and shortly after the completion of the recording sessions, Vikernes would stab Euronymous to death in the doorway of the guitarist’s flat.

“It laid the foundations and inspired a lot of other bands,” recalls Attila Csihar, the Hungarian vocalist whose tortured, vomited croak appears on De Mysteriis dom Sathanas, and who has subsequently fronted Mayhem since 2004, “but we turned to ashes! But from the ashes other bands could fucking rise up! The whole scene could rise!”

Csihar had already started to move on from his earlier career in Budapest band Tormentor when he was invited to join Mayhem. Formed in 1985 when the singer was only 14, Tormentor amassed a solid following, sometimes drawing hundreds to shows. It was then he learned about stagecraft, employing the kind of props and masks that he still utilises in his performances today.

“We had 500, 700 people in Hungary, sometimes 1100. Imagine that! Fucking kids, crazy as fuck! For me, that time I didn’t think about it, but looking back I learned [from that]. We were doing make up, we had masks and a big fucking skull, everything. It is a small country in Eastern Europe, and for some reason that happened to us. I had maybe 50 – 100, 50 – 80 shows. Mayhem didn’t even have that many – only later. We didn’t make any money, and in fact as kids you weren’t allowed to. The clubs loved it because lots of people came, and I even would see punks and skinheads hanging out together!”

After living under the oppressive yoke of communism, Csihar came to Norway as a 22 year old. Even as someone who had been lucky enough to travel to the West several times during his childhood, Norway was an eye-opener.

“I had never been to Scandinavia, only Germany, Austria, Switzerland and I didn’t know much about Norway, so I was amazed,” he says. “Especially by the nature, but also by how much – it’s very advanced in a social way, it was very sophisticated and very civilized. That society and the extreme conditions of Nature culminated in this music, because there is six months of darkness!”

Any hopes he may have entertained about becoming Mayhem’s permanent vocalist were soon dashed – Euronymous was dead, Vikernes was in prison and the band, in Csihar’s words, “was turned to ashes.”

“It wasn’t planned,” Csihar says. “We had an offer from a festival in Sweden and they were like, ‘Hey, you guys want to play the whole Mysteriis record?’ And we were like ‘Nah… Fuck it, let’s do it!’”

Up until then, the band had thought about performing the album “but it was never the right time.”

“We needed the right spirit,” the singer continues, “the right people in the band and somehow it seemed to be that this is the best line-up to do this album. With Teloch and Ghul in the band, there’s somehow more chemistry in the band.”

What began as a surprise one-off performance has turned into a world tour that focuses on De Mysteriis dom Sathanas. Australian audiences will get the opportunity to revel in the blasphemy of black metal’s most infamous album when Mayhem return in January. It will be Csihar’s second visit and the band’s third overall that includes an appearance at Hobart’s Mona Foma Festival, the sister event of MOFO that featured Ulver earlier in 2017.

“It’s very important. Mayhem’s first full length record. We haven’t toured this album before, so it’s been very important of course,” Csihar asserts. “It has co-ordinated into this whole tour and now we are coming to Australia again, which is amazing as always. We always love to play there. We have no bad shows  or bad memories of playing Australia. It’s always great.” 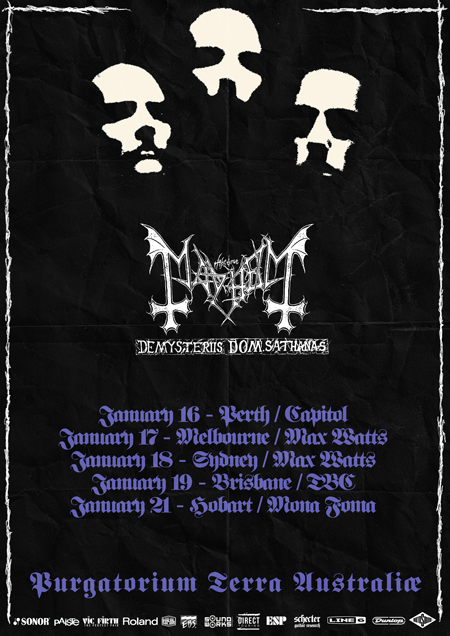