There can be little argument that Napalm Death is one of the greatest and most significant bands in the history of extreme music. The influence they have had can be felt everywhere from punk to power violence to thrash and from hardcore to death metal, industrial and, of course, grindcore. Napalm Death’s formidable melange of distortion, blast beats, furious time signatures, insane tempos, non-linear song structure and bellowed, growled and shrieked vocals have set a benchmark for perversely uncomfortable noise terror across a catalogue of astonishing consistency that few have adequately matched.

Thirty years ago – the same month as the release of the band’s first full-length recording – Napalm Death’s longest-serving member Shane Embury joined the line-up as bass player, their fifth.

“I became friends with them while they were recording Scum,” he recalls. “I was asked to join in between when they recorded Side A and Side B and I didn’t do it, which is probably my only real regret in life, I guess.”

Recorded by two different line-ups of Napalm Death between August 1986 and May 1987, Scum followed a tumultuous early period of demos – all of which featured different personnel – and a stylistic shift, as guitarist Justin Broadrick and drummer Mick Harris introduced metal influences from bands like Celtic Frost, into what Harris would refer to as grindcore.

“That was the bizarre thing,” Embury says. “They formed in 81, went through many demos, an anarchic punk kind of Crass-type of music; it wasn’t until 85-86 when Mick came in when they started to speed up.”

By the time Scum had been released, there were no original members left. It would take another two albums and four years before Napalm Death’s line-up was permanently settled. An always experimental band, their style has constantly evolved and developed across the intervening three decades. Early-90s flirtations with death metal and industrial sounds led them back to grindcore extremity and intermittent revisitations of punk, thrash and hardcore through EPs of covers and tribute albums. They are a group of men who refuse to sit still for very long, and on their upcoming tour it will be Embury who gets to rest the least. This year’s Campaign for Musical Destruction tour also features two of Embury’s other bands, Lock Up and Brujeria, meaning he will be onstage for almost the entire night.

“It came about when we were putting a tour together with some other bands that fell through and Brujeria got added, so originally it was going to be Napalm and Brujeria,” the bassist explains. With the new Lock Up album due and the ability for that band to do much touring because of other commitments, Embury pushed to have them included on the shows.

“I think they were afraid I would have a heart attack or something!” he says with a chuckle. “We did 24 shows in May, which would be like 72 shows for me! – and I pulled it off. Different bands have different kinds of movement. Brujeria is a different entity than Napalm, Napalm is still very much more energetic than what I need to focus on with Brujeria, but in the end you’ve just got to try and challenge yourself.”

The Australian leg of the tour features fewer shows than the month-long slog through Europe but it still amounts to three shows a night for the 49-year old musician, and it also means that Brujeria and Lock Up, both of which have also featured pretty fluid line-ups on occasion, will be playing here for the first time. On the oft-raised subject of his main band’s many personnel changes (at least, in the early days – Napalm Death has had the same members now for 21 years), Embury is philosophical.

“If you’re a fan of a band for any period of time, there are bands like Napalm that have diehard audiences. Napalm’s fanbase is quite wide, quite varied,” he says. “I was a fan of Napalm Death before I joined Napalm Death. I saw them on March 22nd, 1986, twenty minutes from where I lived. That was quite a pivotal moment, because I was a fan of a band that I really loved and then I joined the band. And I’ve met people along the way who say they are only fans of Napalm pre-Scum. Even by then there was no original members left!”

He still maintains contact with most of those members, including the band’s instigator Nic Bullen.

“Me and him are very close, very good friends. He does a lot of hard electronic noise. When I ran into him a few weeks ago, his opinion is still like, Napalm Death was a particular idea and concept and he sees myself and Barney as just as important because we were there at the same time and we just carried it on. Other fans have a different view of it. I don’t get bent out of shape about it. I enjoy the discussion, because there’s not too many bands that have that bizarre early days period to talk about.”

Embury likes the idea that Napalm Death is the embodiment of an ideal as much as it is a band, and could carry on as long as like-minded people were prepared to let it continue, with or without him.

“It could be perceived that way. I think the people that came into the band, they’ve added to Napalm Death to such a degree that it became a very important purpose fulfiling that idea, and also the music behind it. We all grew up with very similar musical tastes, so it all became very important to us. And also, underneath all that, you wanted to live alternative lifestyles, shall we say, so the whole thing embodies the idea of Napalm Death, and Napalm Death is a band that is always pushing the boundaries. If I ever left Napalm Death for whatever reason, I’d be happy for it to carry on. I don’t think I would have a problem with that.” 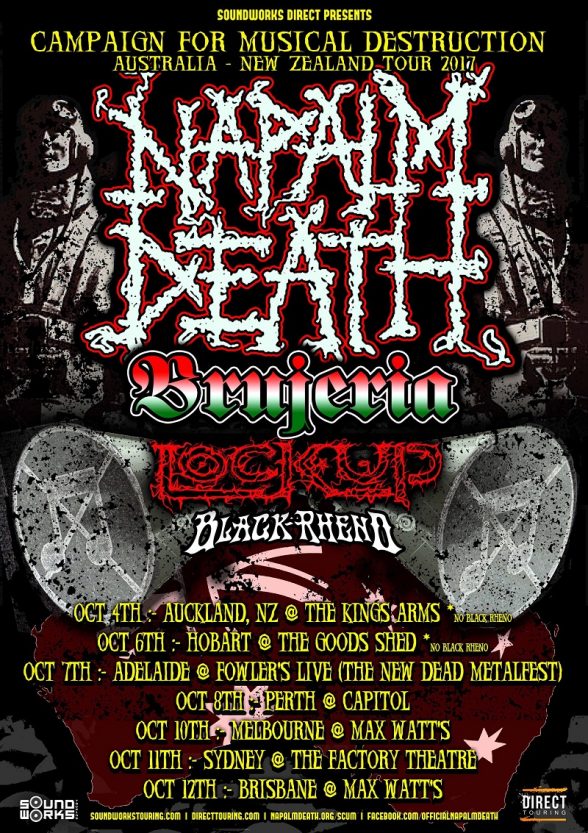