The opening of 2017 will not be remembered by Ne Obliviscaris as one of their finest moments. After touring the international circuit for the best part of the previous two years, the Melbourne collective was gearing up to record a new album when a storm broke, embroiling them in controversy that would play out for months.

Following a statement that long-term bassist Brendan Brown had been released from the band for irreconcilable personal differences, Triple J’s Lochlan Watt and satirical music blog I Probably Hate Your Band revealed the real cause was serious domestic violence allegations against Brown going back years. IPHYB was particularly relentless, publishing sickening accounts of Brown’s behaviour as related by one of his victims and calling out the rest of the group for complicity, essentially accusing them of guilt by association.

“Complete ignorance,” is how founder and vocalist Xenoyr describes the accusations. His tone is particularly measured considering the social media shitstorm the controversy quickly became, but there is a note of resentment. “You spend so many years working towards something, building and developing, and then you have a member leave under such circumstances… we were put under the spotlight and had so much criticism directed towards us for… people judging us for nothing!”

It went so far that Ne Obliviscaris eventually issued a statement threatening legal action against the blog when it suggested a boycott of the band’s Patreon account. That became something of a tipping point in the band’s favour. Some commentators suggested that what began with good intentions – the removal and exposure of a violent offender from the band – was turning into a witch hunt against the band itself. The IPHYB blog no longer exists, but Sam Bean’s most recent post on his The Senseless WordPress has an excellent analysis of the zeitgeist of the moment. As Xenoyr points out, in the wake of the controversy there was little impact to their crowd-funding.

“There wasn’t a big difference – which was surprising,” he admits. “The people that are supporting us by Patreon see how much work goes into everything we do. There wasn’t too many people who pulled out. It was more of a standstill. The whole drama that was going on online went over a couple of months and people were waiting to find out what happened. But at the end of the day it didn’t affect us too much.”

The effect on the remaining members of Ne O was unifying. Already committed to releasing a new album within the year, the band pulled together to make it happen.

“Tim and I drive the band. We’ve always been in the same mindset that regardless of what happened, we’re still moving forward, and I’ll be fucked if one thing is going to destroy what I’ve done,” Xenoyr declares with proud defiance. “When you see things getting hard, you’ve got to rally your troops. In doing that we became a closer band. Granted, it did cast a dark shadow over the band at that time, and I think there’s a dark element to Urn that’s translated. How we are now, we’ve forged ahead and the past is the past.”

Notoriously long-winded when it comes to new material, Ne Obliviscaris had given themselves a release target for within 2017. Season of Mist also set them a deadline.

“The label has been very supportive the whole time,” Xen says. “This is our second album with them and we’ve had such a positive response to the first album that they’ve been very good to us with the second. They said they needed an album delivered to them by a certain time if we want it released within 2017. So we used that as a guideline.”

New songs had been gestated during breaks on tour – “We started writing a lot on days off and during soundcheck,” Xen reveals – and further progress was being made when the Brown drama exploded.

“That set us back a little bit but at the same time it forced us to band together a lot better. We learned to work together more efficiently so the writing process for the bulk of it was within a couple of months. It was a lot quicker than previous albums considering the first one took about nine years and the second one was a year and a half or something. This one was a lot more efficient.”

Released in October, Urn reflected the band’s troublesome beginning to the year with a darker tone across its six tracks. Critical reaction to Urn was positive but mixed, and the true test of the material will come when Ne Obliviscaris take to Australian stages again this month. With most tracks averaging nine minutes, the band’s full headline set clocks in these days at almost an hour and a half. Xenoyr hopes that experiencing the band live helps the audience feel and understand their music a lot more.

“Our type of music does take a while to digest,” he says candidly. “It’s not exactly straight forward and simple. Seeing it live, even if it’s for the first time, is a lot more enjoyable because you can see all the different elements, as opposed to just hearing them on a CD. If you’re watching a band live, you can actually feel the different elements come into play and see what everyone else is doing. I think our live shows are definitely more appealing to new listeners.” 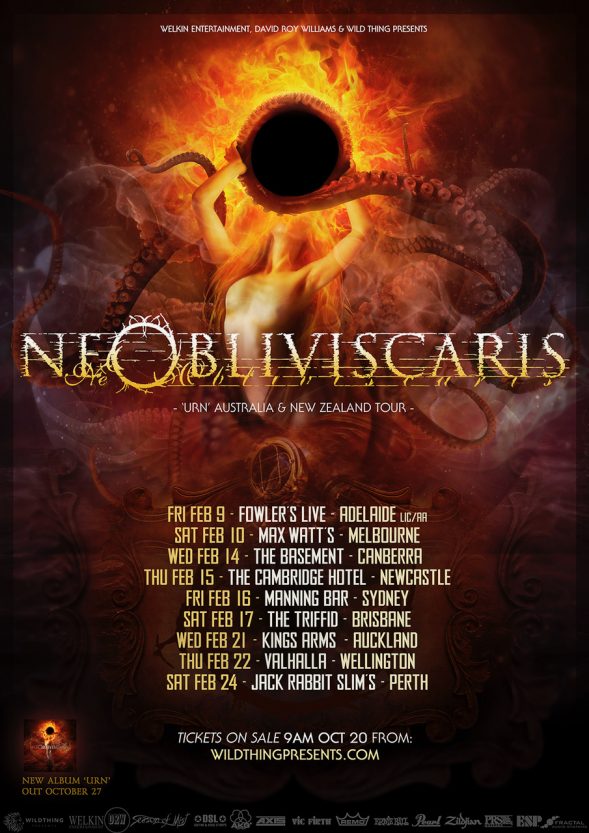