Opeth: A Sting in the Tail

Home > Features > Opeth: A Sting in the Tail

Opeth have done something very different for their latest release. Always a band looking to ever-expand their creative palette, this time they decided first to write an entire album in their native language, and then give it a Latin title.

“We’ve never really done anything in Swedish except for the cover track we did for Watershed, “ explains guitarist Fredrik Åkesson. “We did a cover of the singer from Roxette’s song ‘Den ständiga resan’. [Mikael]’s always written in English, so when he first told me the idea I was worried that we might only be doing it in Swedish. I think only releasing it in Swedish would not have been the best idea!”

Even for a band that maintains a reputation for a level of unpredictability, recording an album in Swedish would seem to be counter-intuitive. English is often called the ‘language of rock and roll’, and almost every artist in popular music with any kind of international profile, from the most underground cult black metal band to worldwide pop superstar, have found it both important and necessary to record in English to expand their audience. Åkesson explains that, despite this, Mikael Åkerfeldt felt it artistically imperative to write in Swedish this time out.

“I think that was the driving force for him. He wanted to experiment with that. One of the first tracks he wrote was the last track, actually, and he started off with that idea.”

The experiment posed its own unique difficulties for Åkerfeldt however.

Musically too, it was important for In Cauda Venenum to be different from previous Opeth journeys. To that end, these may be some of the most epic-sounding pieces in the band’s catalogue, with their meandering arrangements augmented with orchestral elements and voices. Epic, Åkesson says, “was one of the key directions for this album.”

“I think it also varies a bit more than the last couple of albums,” he continues. “I think it’s much heavier. This one is very different from the other ones and that’s very important. It feels like we’re fresh and we always have new territories to explore.”

In Cauda Venenum – roughly translated as sting in the tail – will be released in a special edition featuring both Swedish and English language versions for those completists who need to hear both. Differences in cadence means that there are slight variations between the two, although the translation wasn’t as difficult as expected.

“A lot of lines could be directly translated. Of course you have to change some tones… for diehard fans, the melodies changed a little bit because there’s different words to sing on, but that’s kind of cool. For me, I got very used to the Swedish version, but I prefer some songs with words that are in English and some that are in Swedish.”

As for the title itself, Åkesson suggests that it refers to the album’s final track, “All Things Will Pass”. The first song written for the album, the guitarist recalls that even he was blown away when Åkerfeldt presented it to him: “I think that’s something that relates to the last track. You have a very epic chorus, very melodic – I remember when I first heard it, I got goosebumps actually. Maybe that’s what Mikael refers to as ‘the poison in the end’, but this time around the poison is a rewarding chorus at the end. It’s quite easy to not dislike!”

In Cauda Venenum is the third album to feature the same line-up, which has been together since before the release of Heritage in 2011. It’s the longest period in the band’s recording history with the same personnel, making them a solid creative unit in the studio and an increasingly powerful group on stage. Opeth will be back in Australia in December with some of the new songs in the set, but they will never forsake the songs that helped to get them where they are today.

“It’s a good dynamic to have the old songs and the new ones in the live set. I played on Watershed, which was the last album to have that death metal element. I am pleased I got to be part of that era of the band. When it comes to that, we really love to play those songs live. I think Mikael’s growl is more brutal than ever. One era feeds up the other, in a way, at a live gig. We’re more than happy to play it. It’s the foundation of the Opeth sound. It’s nothing we want to shy away from. We still enjoy those records very much.” 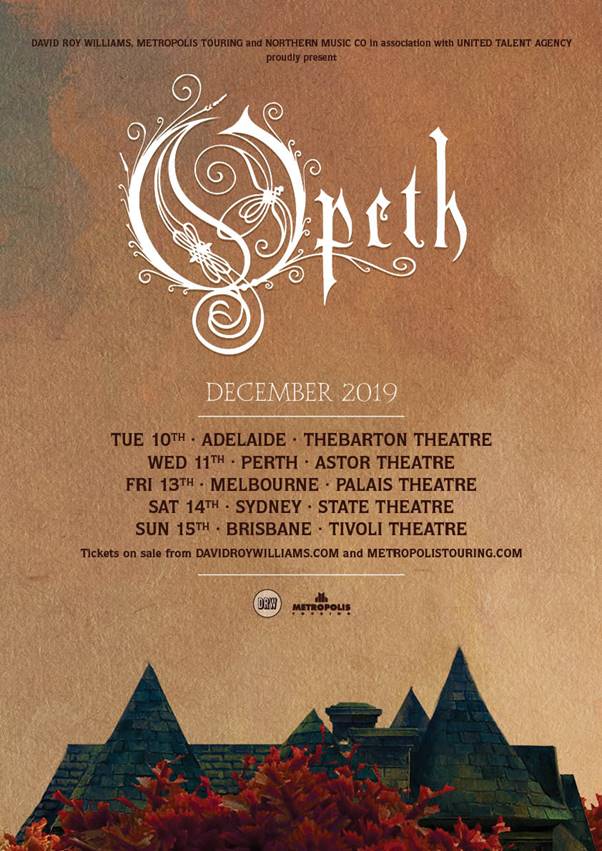