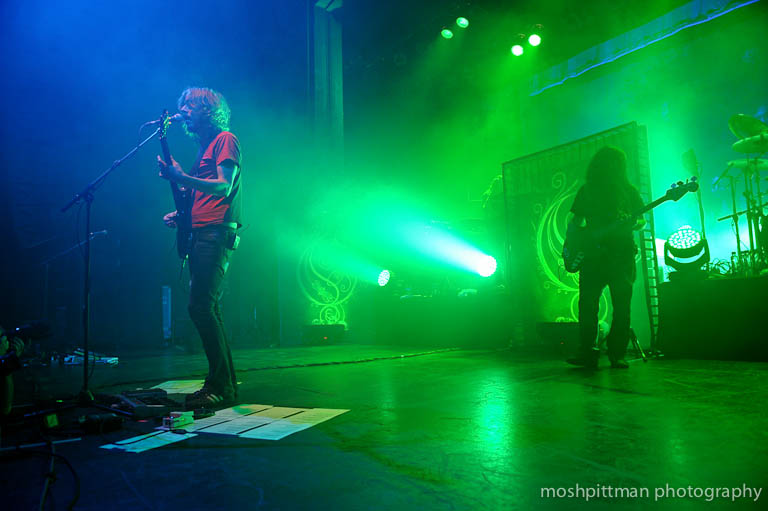 Opeth return to Australia this month for what will surely prove to be another highly successful tour. Guitarist Fredrik Åkesson took some time off during a morning of rehearsal and songwriting to have a chat with Loud about what we can expect, when we can expect it, and touring with Katatonia.

Hi Frederik. Nice to talk with you. I have to admit that I’m rather excited by the prospect of seeing both Opeth and Katatonia touring together this time.
That’s great! We’ve toured with them, well, since I’ve been in the band, a few times and they’re great lads to hang out with. And they’re a very good band I think! Bring it on.

I’ve spoken to Jonas (Renkse) a couple of times and it’s almost like you influence each other, so it’s almost a perfect match.
Yes! Maybe we can play some Bloodlust together!

Ha! That would be incredible. But let’s talk about Opeth now. The last time Opeth was here was on the Heritage tour. What was that like for you, because it was your first tour here with them?
It was great fun. It was my second time down there; the first time in Australia was with Arch Enemy. We have a very dedicated fanbase in Australia. It’s always overwhelming, I would say, when we play. That’s always great, a lot of fun to play in front of.

I imagine that on this tour you’ll be doing different songs than last time. That’s seems to be something that Opeth is known for, playing different songs on every tour. A lot of bands don’t do that.
Yes. I think it would be unfair not to. It’s very important that we play a different show than the last time we went to Australia. This time around it’s gonna be quite different. There’ll be less songs from Heritage. Last time there were four or five songs. This time we’re gonna heavy it up a bit more and we’re gonna incorporate those death metal vocal songs as well, which people were complaining about not playing last time.

The major complaint I hear from people is that you don’t play “Demon of the Fall” anymore. I don’t know about other parts of the world, but that song seems particularly popular here.
Ah ok! Well, maybe we’ll have to play that this time. You know, we’ve been playing “Demon of the Fall” on this tour and at the major festivals in the summer. At some of the sit-down shows we played it on acoustic guitar with three-part harmonies. It was quite interesting and turned out great.

The reaction to Heritage was very mixed. I quite enjoyed it, but I know a lot of people didn’t. What are your own thoughts about the album now?
I’m proud of the album. I think it’s a very good album. I understand the controversy about it, but it was something the band needed to do – something different to break out of the box, or however you want to put it. And also the album is called Heritage. It’s about the musical heritage of the band. It’s a bit of a flirt with old hard rock themes, [like the] Ronnie James Dio tribute track for instance or, you know, there’s a bit of Rush in there or some Swedish folk.

The Dio influence was pretty obvious. When you played that song live, I almost felt that Dio was with us. It was almost like you were doing a Rainbow cover.
Thank you! That song, that riff was written the way that Ritchie Blackmore would have written [it] in the Rainbow era with Ronnie Dio. That was on purpose. You know, with that riff, I felt that it might as well be a Blackmore tribute. My solo was a Blackmore tribute (laughs).

What direction is Opeth likely to go in this time?
Um… well, I would have to say, in a somewhat different direction to Heritage (laughs). It won’t be a step back, but it will be different. Maybe more intense in a way. You’ll have to wait and see! I was in the studio today and put down my solos and I was very happy about it. The song I heard that Mikael wrote today sounds very cool. I think that’s all I can say at this point! I’m sorry (laughs).

Are you working with Steven Wilson again this time?
It’s too early to say. Right now we’re in the writing process. Maybe later on I would say.

You’re actually working on new stuff at the moment. How long is it going to be before we see a new Opeth album?
The plan is to try and record at the end of September, when we’re done with all the touring. This is the longest break we’ve had between albums. I think the longest break we had before this was before Watershed. It’s not gonna happen this year, most likely the year after.

You can catch Opeth with Katatonia on the following dates-