For Bobby Blitz, everything is about opportunity. Every tour, every album, every moment alive. Since 1980 he’s been howling with his razor-like voice across the slashing riffs of New Jersey metal pioneers Overkill and even at 58, with a couple of health scares behind him, he is in no mood for slowing down. The band’s 18th full length album The Grinding Wheel is as vital and visceral as anything they’ve done. Anything less and Blitz feels they would be letting themselves down.

“If you can outdo what you’ve done prior, or at least try to,” he says in a speaking voice almost as fast as the way he sings, “I think you’re doing the right thing, you’re doing your job and it’s probably an unspoken principle about Overkill: Don’t mail it in. Be there and make it happen and do it to your highest. I think that’s worked for us. It hasn’t made us world renown at a high level, but that’s where the satisfaction is for us.”

Despite the injection of some groove during the 90s, Overkill has remained a straight ahead thrash band from their very beginning. They’ve never felt the need for wholesale directional change or the need to lobby for mainstream attention. All that’s ever mattered is making the best record they can, whenever they can.

“Under every circumstance you’re trying to write the perfect record,” Blitz declares. “We’re not gonna go in there and say, ‘Oh let’s trim the edges off this’. We’re a thrash band for God’s sake! We’re a metal band! We know what our job is. There’s no conflict within ourselves or personality crisis about what we are. This is the path we chose as regard to the type of music we play. So there is a great satisfaction when we can say that under those circumstances we did the best we could, and in some cases even better than we anticipated, and I think that’s where satisfaction comes from with regard to the years that have passed – even up to The Grinding Wheel is something we can stick our chests out about and say, ‘Hey, we weren’t kidding. If you want the flag, you can have it but you gotta take it from us!’”

Blitz is a strong believer that thrash is as strong now as it ever was, and if Overkill can’t back up that claim themselves with an unbroken run of white-hot albums going back as far as 2003’s Killbox 13 at least the recent surge of great records from their peers and contemporaries certainly bears that out. He’s also convinced that “the blueprint of the 80s has been accepted by a new generation” and that the dedication of long-time fans has inspired devotion from younger ones.

“Some of the people have followed us all the way through,” he says, “so it’s opened the door up for some youthful exuberance to come in and some youthful fans to come out. I think it gives the bands with experience, much like ourselves or an Exodus or a Testament or a Death Angel, the opportunity to show what we have.”

There’s that word again – opportunity. It’s part of a code to live by for Bobby Blitz and Overkill, part of the reason why they still hit the stage whenever they can and why album number nineteen is already taking shape.

“I think that we’re a little bit different,” he elaborates. “We’re not artists – we’re craftsmen trying to make something a little bit different each time instead of wondering why nobody understands my frame of mind at this particular time. I want that reaction from my action, that’s what feeds my soul. That’s what my addiction is. That’s my drug. There’s no rock stars in this band. It’s a team. Five guys who depend on each other.”

Keys to their ongoing popularity is an ability to keep a solid line-up together – recent addition, drummer Jason Bittner, is the first change to the band’s personnel since 2005 – and continue to write great thrash songs.

“DD’s full of music,” Blitz says of founding bassist DD Verni. “Some people are full of shit, DD’s full of music. It’s great when someone’s always got a riff. He needs to get it out and it’s something that I have latched on to, something I can expel by finishing those songs if I need to. It’s sort of worked for us. To look back over thirty years and ask if it’s satisfying, well, of course it is. It’s not so much a career anymore, it’s a way of life. For bands like Overkill, at least we can say we’ve walked through this life and we’ve done what we wanted. That’s kind of a cool thing to be able to say at the end of the road.”

While they might not to ready to throw in the towel anytime soon, Bobby Blitz is keenly aware that announcements like Slayer’s recent retirement plans are sending out warnings for bands like his. That’s why he talks about opportunity so much.

“It tells me that the clock ticks, and these opportunities – The Grinding Wheel, the tour of Australia, the new record we’re writing – these are opportunities that need to be celebrated and embraced while that’s still possible to do. So I’m not gonna talk from the seat of desperation, but the clock does tick! One day this will all be gone and hopefully someone else will be there to continue.” 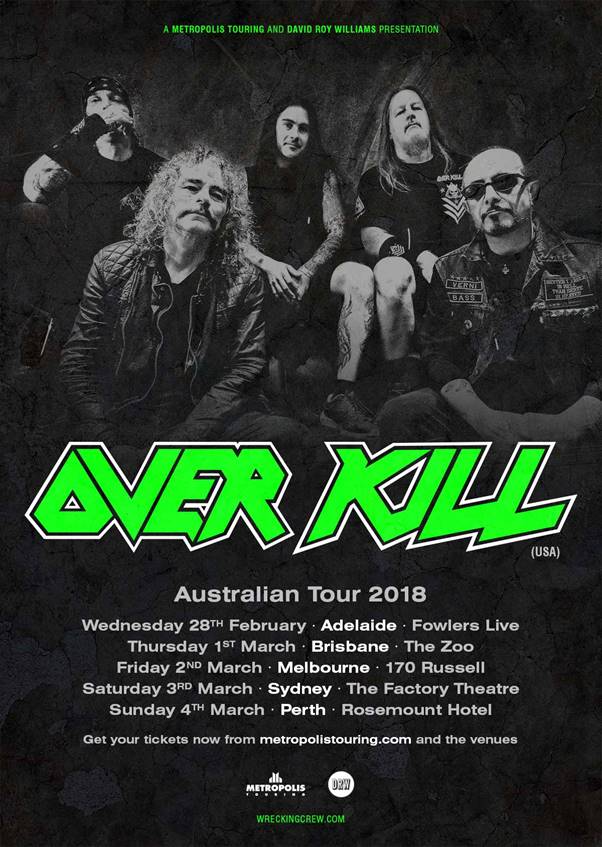