Pagan Altar formed in Brockley, South East London in 1978. The band, centring on the creative nucleus and song writing duo of Terry (vocals), and Alan (guitar) Jones soon gained infamy for their live shows that saw them ably perfecting the visual element of their performance to accompany their music.

The band members would perform in hooded cloaks. Although perhaps taking centre stage during these performances was the altar. Bathed in blue light and adorned with black candles, incense, burial urns, skulls, and an inverted cross, it must have been an impressive sight to see. In tandem with the visual aspects was the band’s music itself. Pagan Altar tended to write songs that were interconnected in theme; said themes were fully explored in the band’s live sets. On that note, Pagan Altar wrote a prodigious amount of songs during this period, some of which comprised 1982’s ‘Pagan Altar’ demo.

The demo soon spread like wildfire across city and continent, garnering recognition, appearances on compilation albums and a potential US tour with a then up-and-coming Metallica. Regrettably, the situation at home worked against the band. Despite their obvious talents and drive to succeed, Pagan Altar pursued a much different style from what was popular. Additionally, a single laid down for Abbey Road Studios went unreleased, owing to the pressing plant going bankrupt. The opportunities to present themselves gradually dried up, and Pagan Altar was laid to slumber.

Fast forward to the mid-1990s, and the members of Pagan Altar became aware of a demand for their music, which had been kept alive via an unlikely means: their ‘Pagan Altar’ demo had been widely bootlegged from the late 80s through the mid-90s. The band soon felt a need to officially release the tracks; to put an end to the bootlegging and make the music affordable and available to all. The result was 1998’s Volume One. Later restored to its correct title of Judgement of the Dead, it is perhaps the Pagan Altar release that is the closest to traditional doom; it dealt thematically with magic, witchcraft and occultism.

Further archival recordings emerged in the form of 2004’s The Time Lord EP, comprising early versions of tracks from Judgement of the Dead along with two exclusive tracks, all dating from the years 1978-1979. Simultaneous to the Time Lord release, the band had reconvened to re-record their unfinished second album. That album, which was originally worked on in the period spanning 1982-84, became Lords of Hypocrisy. This opus dealt with the nature of man’s inhumanity to himself. The reception to both Time Lord and Lords of Hypocrisy signalled that Pagan Altar’s music had reached the audience it once sought, albeit some 25 years after their initial formation.

Their next recording, 2006’s Mythical and Magical saw Pagan Altar dip even further into their archives; for the earliest of songs drawn for this release was composed in 1977, and the latest in 1983. The album saw a more introspective side of Pagan Altar, along with their trademark NWOBHM and doom metal excursions. The album again garnered a great reception.

Spurred on by their renewed activity, Terry and Alan Jones decided to return to the live arena. The years following saw Pagan Altar take to the stage all over the United Kingdom, and Europe. Audiences in the United States, Canada and the United Arab Emirates also were fortunate enough to witness Pagan Altar perform at selected festivals.  While Pagan Altar focused on live performances, the ‘Walking in the Dark’ 7” single comprising rare recordings was released in 2013. This was concurrent with the news that many had waited for with bated breath: Pagan Altar would return to the studio to record their long-awaited fourth album. The songs that were to make up this album were largely composed in 2004-2005, during the initial phase of their reunion. At least one song largely dates back to their early years. Recording was completed in 2014, but band activities were frozen as the band had encountered an unfortunate turn of events.

On the 15th of May 2015, Terry Jones sadly passed away after suffering from cancer. The reverberations were felt through the metal world. For as well as being a unique and gifted vocalist and lyricists, Terry was known for being a true gentleman to all he encountered and his easy temperament and generosity are warmly recalled. Alan Jones and Pagan Altar withdrew to allow themselves time to grieve. One thing had been made certain, that the album containing Terry’s final vocal performances would see release. In early 2017, Alan Jones announced that he’d enlisted former members Diccon Harper (bass), and Andy Green (drums) to aid him in completing the album to the standard that he and his father had set with preceding Pagan Altar albums; one befitting their legacy. The Room of Shadows is that album. 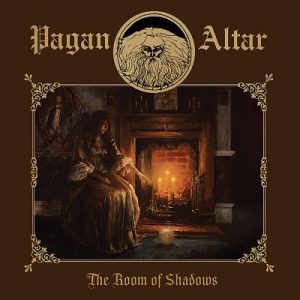 Pagan Altar – The Room of Shadows

The first track, ‘Rising of the Dead’, begins with an eerie intro, recalling Judgement of the Dead (which is especially fitting as the tracks are connected thematically), before giving way to an ominous riff from Alan Jones. Terry Jones’ vocals here give life to the song’s macabre imagery. This is perhaps the perfect song to open the album with, typifying that classic doomy Pagan Altar slow burning epic. Alan Jones is on fire throughout, with some well-placed lead breaks including a great one at the close of the track.

‘Portrait of Dorian Grey’ shows that Pagan Altar still has one foot firmly planted in the NWOBHM from whence they emerged. Catchy riffs and leads abound as Terry weaves a cautionary tale of warning. I must also point out the input of the rhythm section. I enjoyed Diccon’s work on the prior 7” he performed on, and Andy (whose work I was largely unfamiliar with beforehand) proves himself to be a capable, powerhouse drummer. They both provide a firm foundation to anchor Alan and Terry.

The intro of ‘Danse Macabre’ displays a softer side of Pagan Altar, the really bringing their folk influences to the fore. This is a solid blend of those melodic, epic moments and rocking riffs. Tracks like this really prove an excellent display for Terry’s versatility as a vocalist. The man knew how to use his voice to the best of his ability; it’s hard to imagine anyone else singing over these riffs.

‘Dance of the Vampires’ is a mid-tempo piece, driven by Alan Jones’ clarion lead guitars. If I’m not mistaken, the lyrics were based on the classic Polanski film. This track is another that manages to allow each member of the band to shine. There’s a lot of room for the music to breathe, and the track feels that much more expansive for it. The evocative lyrics, vocals and lead guitar provide a good counterpoint for each other. Andy Green’s energetic drumming during the solos is a high point.

‘The Room of Shadows’ begins with a plaintive guitar introduction. This is a very story-driven song; Alan’s guitar and Andy’s rhythmic drumming anchor the track as Diccon’s bass lines begin, signalling a crescendo of activity in that way only Pagan Altar can deliver, with evocative lead lines accompanying Terry’s vocals. The track serves as an excellent display of Pagan Altar’s sense of dynamics, ebbing and flowing until the pace slows and Terry’s vocals lead the track out; bringing the title track’s haunting tale to a close.

The penultimate track, ‘The Ripper’ opens with rain, church bells, and sampled dialogue evoking 19th century London; heralding the subject of the song, as lead guitar and bass bring the song to life. They soon give way to an acoustic guitar melody over which Terry tells the story of The Ripper. His vocals are really a strong point here, offering him an opportunity to use his voice to its full extent, as the track moves from contemplative to raging, from chilling to anthemic. Likewise, Alan’s guitar work runs the gamut here; inclusive of some scorching soloing before ity reverts to a melodic, slower pace, which gradually folds into urgent riffing and soloing until a mournful outro, and spoken vocals lead the epic out.

‘After Forever’ feels like a coda, owing to its short length. Beautiful guitar lines from Alan are set against emotional vocals from Terry. The lyrics, now, carry that much more weight. It’s a poignant, fitting way to close Pagan Altar’s final chapter.

The Room of Shadows represents something of an affecting experience for me. Knowing that this is Pagan Altar’s swansong, and Terry’s final vocal performance, carries with it a lot of gravitas. But at the same time, Pagan Altar can rest easy knowing that they’ve created something that further consolidates their legacy, nigh on forty years from their formation. Recommended not just for Pagan Altar fans, or fans of heavy/doom metal, but for anyone who wants to hear a band putting all of their heart and soul into their work; and forging something that is near flawless.