Pagan: The Wash Up

Home > Features > Pagan: The Wash Up

Pagan have had a huge twelve months. From releasing one of 2018’s most acclaimed albums to blitzing crowds nationwide with devastating performances everywhere from small rooms to the Unify Gathering, the eclectic four piece just go from strength to strength. Heading out next week on an east coast tour, we caught up with frenetic vocalist Nikki Bremen.

Congratulations on the big year you’ve had. Do you feel a sense of validation now that Pagan has been accepted so widely?
I guess so. I think we always felt validated because we were always doing something that was really true to us. So when we released our album, we thought it would be amazing if people loved it, but it really didn’t matter to us whether people liked it or not, because we were really happy with it. But it’s an absolute bonus to be able to do what we’re doing at the moment, to be able to tour and go overseas and have people turn up to our shows who love the music. It’s beyond belief that it’s had such an amazing reception. So there’s definitely validation in having people love the music genuinely and having such lovely people come up after shows and give you a good reaction.

Unify must have been enormous for you all.
Unify was crazy! It was actually, after all the drama with the original line-up… when the line-up got tweaked there were so many incredible bands that I’d never seen and the amazing thing about the Unify festival is that there’s only one stage, which is pretty rare for a big heavy music festival. There’s only one stage, so every band, no matter what time of the day they’re playing, will get a good turn out, and the crowds just want to watch music. They’re the kind of people who just love heavy music, so they just get into it. It was such a great show, we played at a great time and the weather was awesome, as opposed to two years before when we played it on the Triple J Unearthed slot. It was pouring rain the entire weekend! This time the weather was perfect and people were actually able to come out of their tents and watch every band.

Where do you get your energy from? I know that I wouldn’t want to try and keep up with you?
[Laughs] That’s a good question! I honestly, in every day life, try to stay healthy and fit. I think it’s really… as much as I love drinking beer and wine and partying, when you’re on tour I really have to decide which nights I’m going to party and drink because if I did that every night I wouldn’t be able to keep up with myself. I wouldn’t be able to keep up with the band, and I would lose my voice as well. In all honesty, you’ve got to be a bit of a nerd. I warm up before every show, I eat well, I exercise when I’m able to – not on tour! But pretty much every day I’m exercising and I do a lot of warm ups before I go on and really not using my voice too much after the show and screaming over the music at a club. You’ve got to be really mindful of that type of stuff, so that way you can perform really well. I do get really worn out, because it is high energy stuff. But it helps a lot if you do the right warm ups.

How do you look after your voice? Obviously in situations like now, you’ve got to talk, but when you’re on tour do you tend not to talk much?
On some days if my voice in fading a little bit I’ll have a quiet day and try to keep talking to a minimum. But also, the way that you don’t lose your voice onstage is by doing a proper vocal warm-up. I’ll watch the support bands if I can and I’ll be at the merch desk pre-show, but within the hour before we go on I always lock myself in the green room and I do physical and vocal warm ups, and I get into a zone. Then in soundcheck I test the monitors. As long as I can hear myself really loud in the foldback, I’m generally ok. Then coming off stage I allow myself to warm down a little bit. That’s the most crucial part of not losing your voice.
Also, when I’m on tour, and I’m doing a lot of shows in a row, I’ll pack a throat-coat tea. It’s really good and really helpful for that type of screaming.

You’re going back on the road soon, with a few smaller shows. A band like Pagan would be, I assume, right into doing small venues where there’s more direct interaction with the crowd.
I love playing to more intimate rooms. I think there’s a lot to say about a band that can really bring it to a small space, opposed to a huge stage in front of thousands of people at a festival or something. It’s easier to work a crowd in a space like that. In a small room, people get to see through… if you’re playing a band show, there’s nowhere to hide. It’s testament to a band if they can really work a small room and have everybody get into it. I think that’s harder to do than on a big stage at a festival where people are going to be wasted and going nuts anyway. When it’s your own shows, as well, you know that people are there for your band, and the support bands as well. It’s so flattering.

Black Wash has been out for a while and you’ve probably said your piece about it by now, but for anyone who hasn’t caught up with it, it’s a very metaphorical album isn’t it?
Yeah it is. It’s incredibly metaphoric. When we were writing it I had just gone through a break up, so when I was writing it, it was kind of like the stages of grief that I went through after coming up of a long term relationship and reflecting on and realising that the person I was with was very toxic and I wrote the album about that but I used the metaphor of… the person I was with was very controlling, so I’m really fascinated by cults and cult leaders and what it would take to actually join a cult. The research I’ve done, from reading a lot of books and watching documentaries, is that the cult leader always goes for people who are really vulnerable. They’re the people who’ve gone through a break up or financial hardship, and they’re always the kind of people who get roped into joining these cults. I used that as a metaphor for someone being in a relationship they don’t really want to be in, this person is in control over them… The Church of Black Wash is a make-believe church with a cult leader. It’s very metaphoric, but if somebody really listened to the lyrics – and I’d have to write them down so they could read them [laughs]! – then they would probably get a lot out of it if they going through a break up or a hard time. Because I’ve really written it to help people who are going through the same thing.

So it’s cathartic – it’s cathartic for you and you’d like others to find catharsis from it.
Yes, and they’re always my favourite kind of albums. Something I can relate to and take something away from. Any of my favourite albums in the past, when I’ve been going through a similar thing that the lyricist has written about, it’s always helped so much. It’s important music, especially heavy music, because it makes you feel a part of that thing.

Later on this year too you’ll be doing shows with The Amity Affliction.
Yeah, that’s something I didn’t think I’d ever say I’d be doing back when I was 18 or 19. I listened to them and I really liked their album Youngbloods. I thought that was such a good album, one of my favourite metalcore albums of that era of my life. If I had told myself at that age that I would be touring with them now, I’d be so excited! I just feel so privileged to play such big shows with such a popular band. It’s an awesome and hopefully we’ll be able to play in front of some new ears and a new crowd that may have never heard of us. It’s such an opportunity, and playing shows like that is just surreal. The best PA, the best lighting, best monitors, a giant stage. It’s awesome to be able to do that.

Do you ever see yourself being in the same sort of position as they are?
Hopefully! Never say never! We’ll see how the new stuff goes, but it would be awesome to be able to play shows that big. They’ve just killed it. 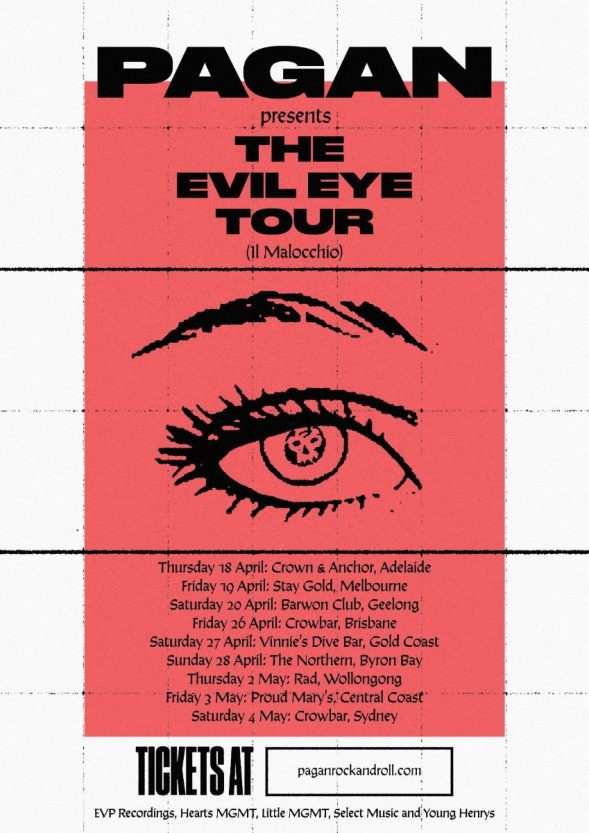