Home > Features > The Quireboys: Feels Like the First Time

Latest release: Amazing Disgrace (Off Yer Rocka)Website: www.quireboys.com
It’s taken them over thirty years, but London rock n rollers The Quireboys are about to play in Australia for the first time. Emerging from their city’s rock scene in the mid-80s as The Queerboys, the band began to gain attention for their affinity with late-60s British rock and roll. Eventually forced into a name change when the prestigious Reading Festival wouldn’t let them perform as The Queerboys, the band recorded their debut A Bit of What You Fancy under the guiding hand of Rod Stewart guitarist Jim Cregan, shortly after the recruitment of Guy Griffin. Besides vocalist Spike, Griffin remains the Quireboys’ longest serving member.

“Me and Spike have always talked about going to Australia,” the guitarist says, “but we’ve never really known why we haven’t been able to come down. Like, there was a band down there called the Choirboys, but so what? That doesn’t matter.” He recalls being in contact with Choirboys’ Mark Gable at one point. “He even talked about us doing a tour down there together.”

Whether that was merely a thought-bubble by Gable’s behalf or a genuine offer, that tour never eventuated and by 1994 the band had sputtered to a halt. Reforming in 2001, the Quireboys have now made twelve albums – their most recent, Amazing Disgrace, was released earlier this year – but their dream of touring Australia has continued to elude them until now. Griffin talks enthusiastically about the Quireboys’ affinity for Antipodean rock from the 70s and 80s and the influence they had on him and the band.

“We are from the same school as the Aussie rock bands,” he declares. “All those bands had such a big influence on us in the Quireboys: AC/DC… Rose Tattoo… Jimmy Barnes! I saw Jimmy Barnes at the Brixton Academy in 1987 on the Freight Train Heart tour. It was one of the best rock and roll shows I’ve ever seen!”

He speaks warmly and fondly of late Aussie rock legend Mick Cocks, with whom The Quireboys toured in the early 00s when Cocks was a member of Sydney bad boy rockers Doomfoxx.

“Mick… he was such a gentle soul,” Griffin says. “That tour with Doomfoxx was a really great tour. The first night we had a bit of falling out with them – not with Mick, he was a total gentleman, but a couple of the younger guys from the band. But by the end of the tour, we were all really good mates. I remember that being a good tour.”

Coming from England, The Quireboys influences and style were markedly different from an 80s rock scene dominated by Sunset Strip-inspired sleaze bands but, like their compatriots Dogs D’amour, being concurrent with those groups sometimes meant they tangled up with them. Not unpleasantly, Griffin moves to separate The Quireboys from the maelstrom of American hair metal acts that were everywhere at the time.

“Don’t lump us in with those bands,” he says. “When you listen to any of the Sunset Strip bands, do you hear the Faces? Do you hear much of the Rolling Stones? I don’t think a band like Mötley Crüe really had much of that sound to them. No disservice to anyone, but I can admit that we like the Rolling Stones and the Faces.”

It would be hard to doubt that, with singer Spike’s remarkable similarity to Rod Stewart and the sass and swagger of the band itself.

Rock indeed went on to co-produce their 1993 album Bitter Sweet and Twisted with Stones producer Chris Kimsey. It was a minor hit on the British chart before The Quireboys disbanded a year later. Griffin, Spike and original bass player Nigel Mogg reconvened at the beginning of the century and The Quireboys have rocked on ever since, with something of a revolving door rhythm section. Their current line-up stretches back to 2013, and now includes long-time members guitarist Paul Guerin and keyboards player Keith Weir along with drummer Dave McCluskey and Nick Melling on bass. It’s been the most prolific combination of their career, responsible for the last six albums. The most recent, Amazing Disgrace, was recorded at one of Britain’s most storied recording complexes, Rockfield Studios in Wales.

“It’s where Queen did all that bollocks… Bohemian Rhapsody and all that stuff,” Griffin explains. “The keyboards are still there, so you’re on the same keyboards – I’m not a keyboard player, but they’re fantastic. It’s where Oasis did their second album… I love Oasis, so I thought that was great, their second album. It was the Wonderwall one, where Noel – I’m not a big fan of Noel, but he is a great songwriter –  he just recorded the acoustic part, because so much goes on in the studio. That was interesting to me, and in the middle of that, we made a record. I like all the history and everything, but you’ve still got to make a record.”

While admitting that the history of the place held some interest for them, the band’s mission was to record, and the spectres of past luminaries weren’t allowed to interfere.

“We all know the Queen thing there, but you’ve still got to make a record,” he says again, ahead of some reflection: “99.5% of people who go in there don’t make records as good as Queen or Oasis. We’re making a record and people either like it or they don’t. It doesn’t bother me if people don’t like it – well it would bother me if loads of people didn’t like it – but we just keep making records and people latch on to certain songs.”

For Guy Griffin, writing a song that leaves an impression on someone is really what it’s all about.

“That’s when I know that it’s all worthwhile, when people get into the songs. When someone says, ‘That song made a difference to my life’, then all the bullshit with making a record and dealing with singers and all that – it makes it all ok.” 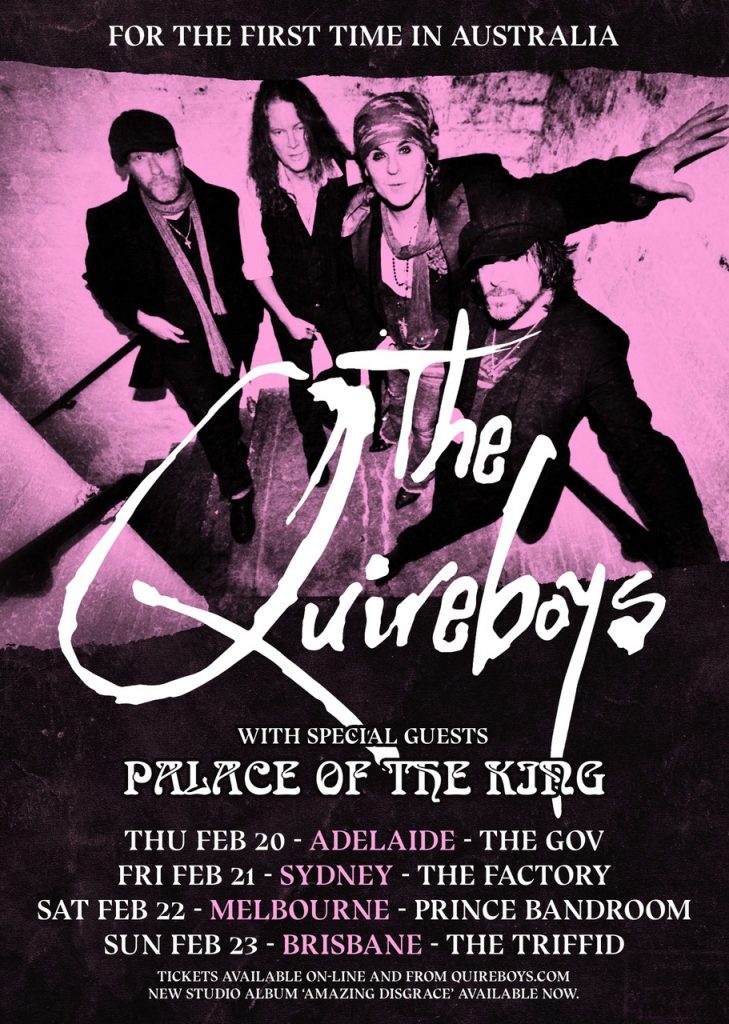