Deniz Tek has told the tale many times before, but it bears repeating. It’s the story about how a band was so vilified for being different, they had to create a scene of their own in order to be allowed to play the music they wanted. In the middle of a musical landscape filled with boogie bands, prog rockers, and Zeppelin wannabes, Radio Birdman was able to build a legacy of tenacity and dysfunction that enamoured them to an underground legion and turned them into an Australian rock legend.

“We had been thrown out of all the venues in Sydney that booked us in the first year,” the guitarist says, “sometimes after the second or third song, and we could never play there again. We ran out of places we could play pretty fast so we would play in somebody’s garage, or basement, or rent a church hall and play there. We didn’t care if we got into these clubs or not. We completely accepted the fact that we were rejects and took that upon ourselves. OK, we’re outsiders – we can still do this.”

Radio Birdman’s journey from proto-punk outcasts to influential cult heroes was eloquently captured in Jonathan Sequeira’s dynamic and moving documentary Descent into the Maelstrom last year. After a series of limited cinematic runs in various locations around the globe, the film is being released on DVD this month.

“I think the quality is excellent. A lot of people had expressed to us over the years that they wanted to see a documentary about the band because they were interested in the story but no one ever got around to making it. They all backed out, except this one guy Jonathan Sequeira. He not only made the film, but he made the film in a very good way. I like the way the music is front and centre. There’s other sidelights too, there’s personal things and me, personally, I take a bit of a beating in it, but the music is the main thing and that is presented in a powerful and unique way, and I like that.”

Tek is quick to admit that he was hurt by some of the comments directed at him by former members. Chris Masuak is particularly venomous towards him. But the guitarist was most surprised by comments from former bass player Warwick Gilbert, whose vibrant artwork helps to enliven Sequeira’s film.

“For one thing, some of the stuff Warwick said I’d never heard before,” he says after a moment’s pause. “It would have been nice to talk about these things when talking about them might have made a difference – not 30 years later.”

“But,” he continues philosophically, “we were young and stupid and riding a big wave and we didn’t think about communication or team-building or any of that kind of thing. We were young rock and rollers who wanted to make music and make an album for us. And that’s what we did. In hindsight you can see that things could have been done differently or done better, but at the time everyone just did what they could.”

Descent Into the Maelstrom came at another upswing in popularity for Radio Birdman, released ahead of a national tour with Died Pretty on which they played to some of the biggest Australian crowds of their career. One show on their upcoming run in October is already sold out. It’s a long way from struggling for acceptance and being kicked out of places for not playing Jethro Tull covers. Since then, it would seem quite a lot of people have come around to Radio Birdman.

“I guess people have their own timeline for coming to understand things or to appreciate things, if they’re going to,” Tek says. “I guess it’s better late than never. We haven’t changed that much! So if anybody changed, it’s them!”

The other factor, of course, is that another set of younger fans have discovered the band. In the mid-90s, Radio Birdman was spurred into new life after name-checking by people like Daniel Johns and Tim Rogers introduced them to a new generation. These days, the kids of that generation are finding out about Sydney’s outlaw rock and rollers.

“One of the things that’s really cool is that there are a lot more younger people coming along,” says Tek. “18 year olds wearing old Radio Birdman t-shirts they got from their grandfathers! So, there’s multiple generations of people are finding out about us. Which is great. I think if you’re influencing younger people, you’re doing something right.” 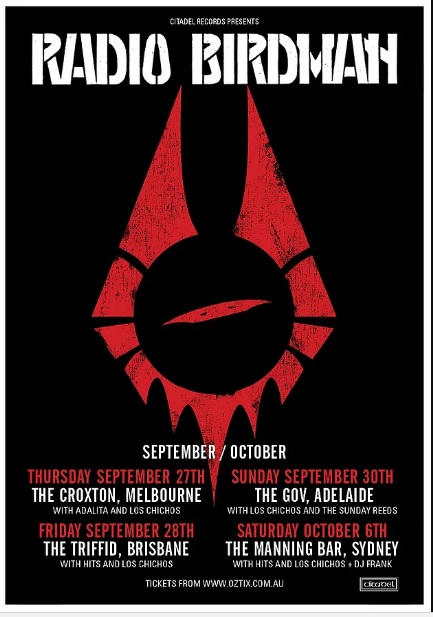