Radio Birdman: Into the Maelstrom

The last time we spoke to Deniz Tek he was about to fly out of the country on a solo tour to support his latest album Mean Old Twister. Today he’s back in Australia and already longing to get out on the road once more, this time with legendary ear-bleeders Radio Birdman.

“In April we did 32 shows, which is more than the number of days there are in April,” he says in his pleasantly dry northern US accent. “Sometimes we did two cities in one day, a matinee in one city and a night gig in the next place. So it was really busy, but we had a lot of fun. It was great. The line-up was great. Especially having the other guitar player in there (Fleshtones’ Keith Streng), for me, was a lot of fun.”

He chuckles at the suggestion that such a schedule would be gruelling for even a much younger act, but Tek is a highly seasoned road warrior who knows how to make it work.

“I had a band that could handle it and in doing it that way we could put money in everybody’s pocket at the end of it, which I really wanted to do. Boy, time flies when you’re having fun and I just want to get back out there and do it again now.”

Radio Birdman’s dual headlining national jaunt with 80s rockers Died Pretty won’t see them hitting the stage every night for four weeks. The shows may be fewer and more spaced apart, but a Birdman show generates a level of intensity far greater than what Tek conjures up on his solo outings. They “aren’t just playing songs,” he says, “it’s something like life and death!”

“Birdman is more intense. I don’t know why – it just is. In my solo bands I play hard and there’s a level of intensity about it, but with Birdman it’s like everyone in the room is on a survival exercise. It’s so balls out and so aggressive, there’s just an onslaught and you have to get through it somehow.”

High energy rock and roll defines Radio Birdman’s existence. Even with the founding members in their mid-60s they are still a band that can stir a room into a steaming and sweaty mess. Tek admits to a level of amazement at the fervor his band can still create. He describes it as a type of feedback loop generated by the artist and the crowd constantly feeding off the energy that each of them produce over the course of a performance.

“I’m always surprised by that,” he says. “I’m always wondering, How did we do that? The goal is to get into a state of mind where you’re not even thinking, it’s just happening and you observe it from another place. It’s spontaneous. The crowd pick up on what’s going on. Which is something pretty extraordinary. When people pick up on that and react to that, they give you more energy back and it can set up this feedback thing where it just accelerates. The energy level can spiral up from that.”

Fresh legions of fans is a key ingredient in keeping that type of energy cycle going. Radio Birdman is fortunate that every new phase of their career brings in newer and younger fans, without whom, Tek rightly asserts, they would find it difficult to continue.

“A lot of people who were around when we started aren’t around anymore, because they’re not here or they just don’t go out. They don’t feel like going out and listening to loud music in the middle of the night. That’s why it’s important to have younger fans. If they weren’t coming along, we wouldn’t have anyone. It’s been very good to see 18 – 25s coming out in greater numbers recently.”

He’s also noticed another pleasing and significant change in the make up of the band’s audience.

“If you went back to the late 90s, most of our crowd were guys,” he points out. “Blokes, 10 to 1. Now a lot of women are coming too. I don’t know if we’ve changed and become more acceptable to them, but it’s pretty welcome for us now we’re getting a more equal range of genders now, as well as the ages.”

Band and fans alike will soon have something more to get excited about and celebrate with the forthcoming release of Descent Into the Maelstrom: The Radio Birdman Story, an independent documentary by Jonathan J. Sequeira. Since early May, the production team has been adding teasers from the film to its website, with a screening to be held as part of Adelaide’s Monsterfest Travelling Roadshow on July 21. A soundtrack album, featuring several Birdman tracks and songs from contemporaries and influences like The Saints, Ramones, Masters Apprentices and Flamin’ Groovies, is out on June 9.

“It’s been in the works for two years,” Tek explains. “They’ve spent a lot of money on it and it’s gonna be first class, production-wise. I haven’t seen it yet, so I can’t tell you what’s in it. As far as I know, the film maker just wanted to tell the story of the band, and look at it from several different perspectives. I know that he interviewed me for six hours on camera. I know that he travelled to Spain to interview Chris [Masuak], and he travelled to England to interview Ron [Keeley], and being an ex-editor for the ABC he has access to all their archive footage and stuff like that. It should be a pretty good documentary.”

Clips released so far show the young band in their frenetic glory, cutting a swathe through a local music scene awash with boogie based rock and pop-rock leftovers from the 1960s, carving out their name with furious energy and a take-no-prisoners DIY attitude. While never radio or industry darlings, Deniz Tek and Radio Birdman continue to win new devotees and maintain the same intensity and mindset to this day, a special band with a special place in Australia’s rock history. 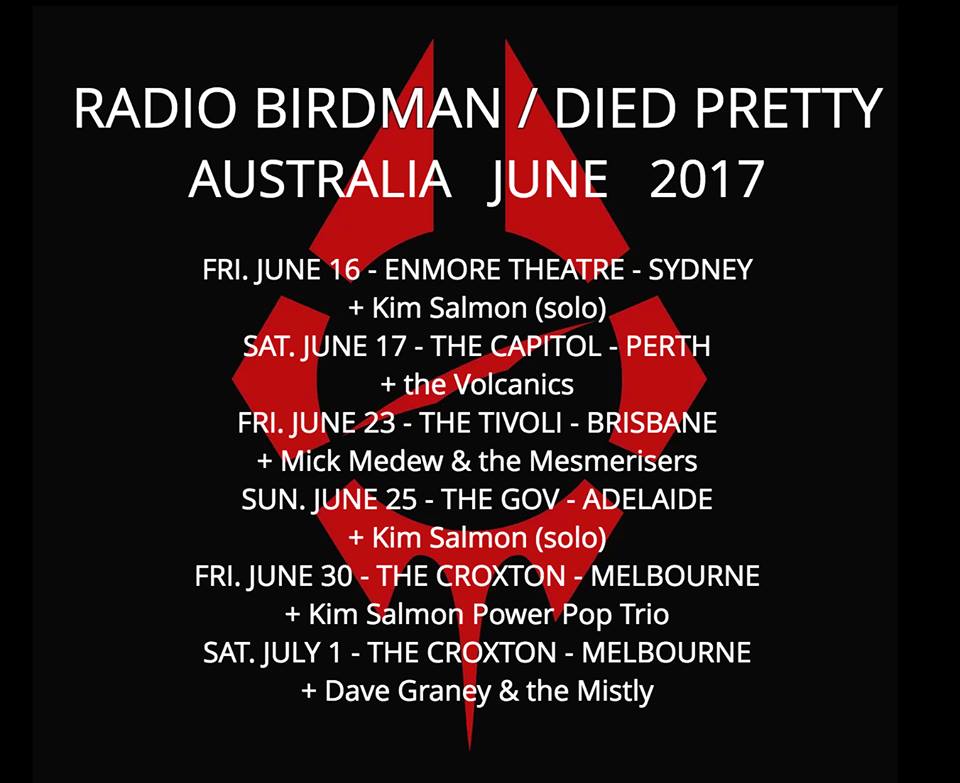