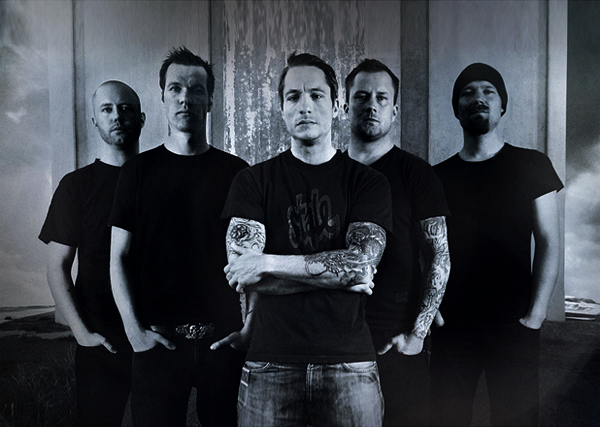 When you play shows with the level of intensity and vigour as Raised Fist, injuries are inevitable. Alexander Hagman, vocalist for the veteran Swedish hardcore mob says before going on tour he attempts to physically prepare for the whole ordeal, but to no avail.

“I do Thai boxing, (but) you can’t compare nothing to this,” he explains of their explosive live performances. “I can train hard to prepare for this. Even if it’s only a 30-minute show, I feel pain in areas I didn’t know exist,” he laughs. “Sometimes you get a bass smashed in your head, but you deal with it. You get some small scratches. This is not a club show where you’re a DJ and saying something occasionally in the microphone. A year ago we played a festival in Sweden, I got electrocuted by the microphone and I collapsed for a second. You can’t prepare for it.”

No kidding. The scars of battle and immense energy required for live shows are major reasons the band has worked strictly according to its own schedule throughout a nearly two decade long career. For instance, as Hagman explains, after signing with long-time label Burning Heart the band took several years to release their debut full-length, 1998’s Fuel. Releasing albums when it suits their personal itineraries and touring sporadically has afforded Raised Fist longevity and enabled them to maintain the high standards they have set for themselves.

“If you get bored by it, you have to ask yourself – ‘why am I doing this to myself?’ If it’s old and hard, if you feel like it’s a pain, where’s the value in that? You’re chasing something that is not about fun, not about love or hardcore. We aren’t chasing fame… We’ve been doing this for 20 years. If it happens, we (still) won’t do it even more often. We’re celebrating our 20th anniversary next March; that’s the lifetime of five or six bands, that’s quite amazing.

“We’ve been on bigger tours, 30 days in a row without a break, minus 30 degrees in the Canadian Mountains. The live show that we put on is so much harder than any other band on the planet that I know; it’s not physically possible for us to do that. We have a less flashy way – we put in 100 per cent power. We couldn’t do this every day, it’s not possible. When I jump on-stage it’s… Sometimes a bone breaks or I bleed, but I don’t feel it when I’m on-stage. You can’t go on like that forever, so we do 14 days in a row, maximum. Then we have to have a break.”

In typical Raised Fist fashion, they’re also taking their time with their next studio record, the follow-up to 2009’s Veil of Ignorance. Hagman explains that the band have begun writing new material; it’s just a matter of being able – in more ways than one – to set aside a month to hit the studio and lay it down on tape.

“We’re not sure when to release it,” he ponders. “We thought about putting it out in 2011, but we didn’t feel like it. Then we thought maybe 2012, but (now we think) 2013 could be a good time for it. We usually take three to four years between albums; you can’t release something just because you’re bored. We’ll probably release it ourselves; we don’t have to listen to anyone. I think it’ll be about 2013; that’s when, ideally, I feel like it’s time for it. I’m starting to feel like I want to release an album, and it’s beginning to feel like it. We have a lot of material… But you have to build up the energy, otherwise it turns into… I don’t know.”

The live shows and recorded output aside, being justifiably proud of their legacy is another reason the band consciously limits their activities.

“To do this over and over again, just being on tour all the time takes a lot of physical and mental preparation. We don’t want to do that; we want to keep the band the brotherhood it is and always has been. This is a special band and we have to do it our way. Going out every so often means we’re so pumped, we love it. That’s why kids’ bands 20 years younger get run over by this freight train. In order to keep the motivation going, you can’t do it every day. This band is something fucking valuable and has meant a lot to us for such a long time, I don’t want to break it, get bored. This band will be Raised Fist and nothing fucking else. When we’re forced to go on, we’ll quite this fucking band.”

No one will be forcing them to take the stage at Soundwave, but that’s clearly not an issue, as the frontman relates his enthusiasm about participating in the festival. While some of the above claims may reek of arrogance to readers unfamiliar with the band, the Swedes have a long history of backing up their smack in the live arena, delivering blistering, awe-inspiring performances nightly.

“I’m pretty fucking pumped,” Hagman chuckles. “We can’t create any magic or bring any pyrotechnics. The club shows, I’m really looking forward to, I think they’re gonna be intense. We should be getting about 30 minutes (at the festival), but we’ll adapt to the rules of Soundwave. We’re gonna play what we’re gonna play and do it harder than any other band on the festival, I’ll promise you that.”