In reviewing a showcase performance in London featuring Angelwitch, Samson and Iron Maiden for the music magazine Sounds in mid-1978, writer Geoff Barton coined the phrase New Wave of British Heavy Metal. The term stuck as a description of the country’s underground metal scene, soon to be mythologised almost as much as British punk in the years since. Becoming a catch-all genre term for a disparate and varied group of bands that often had little in common, the “wave” Barton wrote about was hardly new. It was simply that no one had really bothered with it before.

Slowly awakening around the same time as the punk movement, British heavy metal bands had been plugging away relentlessly in the same underground clubs and with the same kind of dedicated following, but remained almost completely ignored by a media and industry completely captivated by punk. It was only when the punk wave had begun to wane that the few magazines that had been keeping an ear to what metal was doing, like Sounds, began to show some support.

“Some people seem think that it was some sort of club, that you had to be a card-carrying member of,” remembers Raven frontman John Gallagher, who formed his band with his brother Mark in Newcastle in 1974. “It just happened to be that there was a lot of young kids playing totally different music, for the most part… one band was nothing like the other. But what they had in common was a lot of energy and a lot of passion. And that really came across.”

If any one aspect of the NWOBHM myth was true, it’s that heavy metal was everywhere around the country. There was probably over 1000 bands around Britain playing some form of heavy metal in the decade prior to 1985.

“There were pockets of this everywhere. As in most things in life, there were a lot of bands that, for one reason or another, that were around at the same time, never quite made the cut,” Gallagher recalls. “But the initial bands: Iron Maiden, Angelwitch and what-have-you down London way, in the northeast there was ourselves…  there was Fist, there was White Spirit, the Tygers of Pan Tang. It was a healthy scene, put it that way.”

Raven’s wildly over-the-top energy was finally captured on a 1980 single ‘Don’t Need Your Money’, released on legendary independent metal label Neat, whose roster also included Fist, Blitzkrieg, Cloven Hoof, Jaguar, White Spirit, Satan, Tygers of Pan Tang and, most famously, Venom. The single led to Raven’s first album, Rock Until You Drop a year later.  By then, the band had been playing the tough stages of England’s pubs and clubs for six years, building a reputation as a relentlessly berzerk live band that the album’s cover summed up by presenting the trio’s heads appearing from underneath a huge pile of broken instruments and gear.

“We formed our band in 74, our first gig was 75. We got to play in the pub scene, the working men’s club scene which, before us, Judas Priest had done and after them Saxon had done, so we were the next victims to go out there and suffer abuse!” Gallagher laughs. “This is when punk was in: 76, 77, 78, 79. The punk thing, the New Wave thing was very popular and the press were very happy to have a reason to hate heavy metal again, and rock music in general. The fans didn’t care. They just kept coming to the shows, wanting to see the bands.”

Raven’s formidable reputation led to them being invited to the US for one of the most famous underground metal tours of the time – the Kill ‘Em All for One Tour with the fledgling Metallica. A play on the titles of the bands’ albums Kill ‘Em All and All for One, it was the first full American tour for both acts.

“It was a big thing because it was our first real US tour,” Gallagher begins. “We got a message from Jon Z [founder of Megaforce Records] saying, ‘I’ve got the biggest band in San Francisco to open up for you,’ and we’re like, ‘What? Y&T are going to open up for us?’ ‘No! Metallica!’ ‘Never heard of them!’ We got the No Life til Leather cassette and put that in and it was like Motörhead played at the wrong speed. So we thought, ‘All right, well these guys will be fun.’ They were young, they were green, and we hit it off like a house on fire and we all went out there and toured across the States.”

That kind of touring was virtually unprecedented in America at the time. Except for the arena-sized acts, most bands restricted themselves to small scale tours close to their home territories.

“To do that was really a punk rock thing,” the singer says. “There wasn’t any rock bands getting in the back of a truck and driving around the States from top to bottom. We played some really well received shows in the big cities. But we also played places like Bald Knob, Arkansas, scenes like out of the Blues Brothers movie, places with chicken wire. Oklahoma City was literally that, but there was no chicken wire! So people were getting hit with all this stuff that was getting thrown at them. But we were used to that, because we’d played to punk rockers and what-have-you. Metallica were scared to death!”

He chuckles good-naturedly before going on: “We just walked out in the crowd, climbed up on the tables, kicked their beers over and said, ‘Up you! We’re gonna do what we want!’ And they loved it, and kept throwing stuff at us!”

Raven never soared to the heights that Metallica were to gain in the 80s, but they shared a record label with them for several years and managed to survive right through until the present. Their brotherly bond strong, the only line-up change has been in the drumming department. After classic period drummer Rob Hunter departed in 1988, Pentagram’s Joe Hasselvander had the stool for twenty years until his recent replacement by Fear Factory’s Mike Heller. Heller’s recruitment has, as Gallagher says, “given us literally new blood and energy” as they prepare for the release of a new album, their 14th, at the end of the year and a tour that is taking them through countries and cities they have never played in before, including Australia. A gruelling 50-date tour with friend and former producer Udo Dirkschneider in 2017 saw Raven expand their horizons, and the last few years have seen the metal veterans in more places than they’ve ever been to in their 45-year career.

“(Udo) had so many days off that we added about 20 of our own in between. It was a ridiculous tour. So many places we hadn’t been to. We’d never been to the Baltics – Latvia, Lithuania, Estonia – we’d only (ever) done one show in Finland, we did six or seven (there), we’d only done one or two shows in Sweden, we did another five or six there… never played Denmark, so that was groundbreaking. We toured with Saxon last year and there was a few places we’d never been to on that. It was awesome.”

Before their Australian tour with Venom Inc. and Girlschool in June, Raven will have opened more doors with their first appearances in parts of Central and South America. They promise to be “match-ready” by the time they touch down here, and guarantee to put on an energised and exciting show.

““That’s what we do: we get out there and we put the circus on,” Gallagher says. “We love to entertain. And it’s infectious. We’re having a good time, and they’re having a good time. And that’s kind of rare these days when you’ve got so many bands either looking like somebody just stole their last dollar or they’re looking at the floor all night. That does not entertain me.”

John Gallagher has no time for shoegazing or bands that can’t be bothered with a performance. Raven’s philosophy since 1975 has been to play as if lives depended on it, and he expects other bands to feel the same if they want him to go watch them.

“It doesn’t even matter what sort of band it is,” he declares. “I saw Toto and they were amazing, having a great time, trading riffs and improvising… that’s what it’s all about. And then you’ll see another band and it’s ‘Oh these guys are so heavy!’ and they’re just standing looking at the floor! Nope! That’s where you’ve got to give respect a guy like Bruce Springsteen, who gives 110% every night. Do I like the music? Not really. Not my cuppa tea at all, but you’ve gotta give respect to a guy who loves his music and gives it his all. That’s really what it’s about, whether it’s jazz, country, rock, metal… if you’re gonna go out there, you gotta do it all the way!” 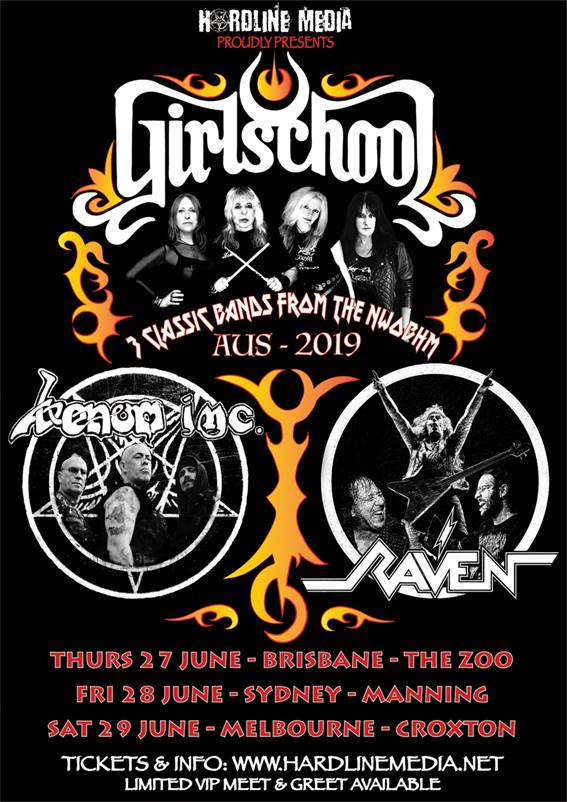