Boston based thrash metal band Revocation are again making the trek from America to Australia. Be it an international support or a headlining act, their reputation of delivering a hammering live set chock full of riffage and solos galore is solidified for rusted on punters. This time around they will be teaming up with Cattle Decapitation, touring on the back of their latest release Death Atlas.

Revocation have a solid, highly acclaimed discography and are a band that is not only heavy but also melodic. Guitar solos from the twin guitar attack peel off behind strong riffs, all of which are built from serious musicianship with a fun angle and within the context of a blistering live set. Loud Online was more than happy to talk music and guitar gear with Dave Davidson.

Nowadays, digital technology has come into play. Are you still touring with huge cabinets?

We do use regular amplifier heads, speaker cabinets and stuff. We also go through a backline company which has a presence in a lot of cities. I am endorsed by EVH, for example, who are a big company so luckily for a lot of gigs, I can get what I am looking for. If not, they will usually have some other amplifier option for me. Digital is definitely something that I am looking into with the more things change but I have always been comfortable with using real amplifiers and I am very familiar with them so I guess that old habits die hard sometimes. I have been using more digital stuff like plug-ins when I’m recording so I definitely see the value in it but I just haven’t made that switch.

The advantage being you can get your sound immediately without coaxing it out of hired gear.

Yeah, with everything there are different trade-offs. Obviously the transport of the gear is the biggest thing. But, when we do fly-ins the backline companies generally provide what we are looking for so if we go to Europe, for example, we are not going to fly over there with all of our cabinets. But there is a company there called Captured Live which has a whole bunch of different gear on deck that we can use and take out.

Revocation’s live sound is loud but very clear. So, the relevance of the equipment is seeing how you have down-tuned instruments without it sounding like a big sonic mess.

Yeah, we kind of pride ourselves on our tone. We like to make sure that everything is dialled in and we also travel with a sound guy who is responsible for making us sound good no matter what the PA situation is like. Sometimes you get a club and it has an amazing PA but sometimes you get one where half the speakers are blown out so then you’ve just got to sort of make do. It is sort of different every night but in general we usually find a way to get it dialled in and sounding good.

When playing live, your guitar soloing sound really pops out of the live mix well.

Thanks, yeah, I’ve just worked on a signature pedal with the folks at Dunable  which I have been using live and it has been a great addition to my set up for my solos and leads. As you got through touring, you learn certain things; you learn what pieces of gear you need, what you don’t need and you’re also open to try different things like switching things out to go on that quest for the ultimate tone. Sometimes the ultimate tone can change from year to year or if you’re in a different band, it might be different for one project compared to what it is for another project. I think that it is about having an open mind and also not getting too bogged down in trying to try out every piece of gear every night because there are going to be too many variables.

In working with Dan [Gargiulo] there’s a fair bit of soloing. How do you go about deciding who does what in the studio?

We kind of have it worked out but it is not like he does a solo and then I do a solo so we can pick whichever one. I’m usually just like, ‘All right, I’m going to do these solos’ and then he’ll take a couple of spots that he likes or when I’m writing a song I might think, ‘Oh, this will be a cool spot that he can solo over’, so it is more kind of pre-planned.

The guitar rhythms you have going are fairly complex in covering death, thrash and even power metal styles. Is that something that took a lot of work to perfect? A lot of your influences such as Slayer, Exodus and Megadeth have precise rhythm section parts. Is that what drives metal for you?

Yeah, I practise a lot when I am home and obviously when leading up to a tour, we rehearse to make sure that we are tight, going into it. For me, as a guitar player, my ear naturally goes to the riff but there is certainly no shortage of amazing bassists and drummers out there that really contribute to the music. I think that music is more than the sum of its parts, it is the whole unit that makes something great. I might be listening to a band like Cannibal Corpse, for example and my ear might be catching the riff or the bassline for a part, or the vocals. There are so many elements of music that you can kind of listen for that make for an enjoyable experience. I certainly like air guitaring along to my favourite records but then I might switch over to the air drums if I am feeling that. It all depends on the listener, the mood you’re in, or just on what you’re kind of looking out for, right. Sometimes a riff is so undeniable that your ear just goes to it. Other times it could be this amazing drum fill that you totally gravitate towards every time you hear it.

As you are the band leader, do you primarily listen to say the snare drum to stay in time?

Yeah, as far as playing live and keeping my place in the music goes I am listening to the drummer, for sure. Everyone has a monitor mix with stuff that they want in there but in general, they’ve all got kick and snare in their wedges that are keeping them on point.

Revocation has a substantial discography but the last few albums have picked up pace and sonic quality. It sounds more punchy and direct. How much of that is down to production?

Oh, Zeuss did the last three records and there are always slight variations in production and stuff like that to give us what we are looking for but he always does a really great job. So, yeah, the production is where you get the clarity for the punch and the low end. That is where all that stuff comes from when you’re listening to a record. But obviously the music has got to be there. The production is just there to aid the music so that it can come through the way that the artist wants it to be heard.

How would you say your approach to song–writing has changed over the years?

It hasn’t really changed that much, to be honest. I guess we just have better means of recording our ideas. I used to record onto tape back in the day but now I am recording into a computer. It all starts with a riff for me and then I just sort of have a compilation of riffs that I start to see which works so I can put them together and see what works. A lot of it is almost intuitive for me. I guess maybe the one difference now is that I am not afraid to discard things anymore or to sort of make pretty drastic revisions to songs. I think that is because when you are first starting out as a song-writer, everything is so new and fresh that you’re just sort of excited about the whole process but now that we have got seven albums under our belt I really look at the songs with a closer eye. I may scrap whole sections that I was really into a month ago but now it just doesn’t fit with the flow of the song anymore in my mind. So, yeah, I guess it is about keeping an open mind and nothing is set in stone until it is actually recorded and sent off to the presses.

Did going to the Berklee College of Music assist immeasurably with your composition skills?

I think that it definitely influenced me and I’ve always been a student of music. I continue to be a student of music and I am constantly trying to learn things and transcribe with the hope that it makes me a better player overall, whether as an improviser or as a composer. Certainly,

I think that just studying with so many great guitar players had a great affect on my playing.

What sort of guitars are using these days?

So did Marty Friedman, being a Jackson player back in the day, get you into Jackson guitars?

Yeah, I mean Marty Friedman is an iconic Jackson player so he definitely inspired me to play Jackson guitars along with so many great players that have released stuff over the years.

You mentioned a signature pedal. Can you elaborate on that for the guitar playing readers?

Sure, it is called the Eidolon from Dunable guitars and it is an all in one lead pedal. So, it has got a boost, it has got reverb and it has got delay in an all in one unit. It has been super valuable to me on tour. I can limit my set up and especially for flying out, I don’t need to carry a bunch of pedals with me to get my sound since it is all in that one box. I’ve been getting great feedback on it. We just did a demo of it at NAMM and people seem to be really digging it. The reviews have been great for me because I really want to put my name on something that is really beneficial to other players so it is great that people are seeing the value in it. I think it sounds awesome, they did a really good job on it.

Is it on the latest album or was it a prototype from ideas, just coming into form at that time?

For a lot of the lead tones and stuff like that, I don’t think the pedal was out at that point. We recorded that album a while ago now. It’s a Zeuss question as he was the one who tracked all the guitars and so forth, I don’t track all the gear, I just play. Zeuss is the guy, he was the mastermind who was putting the bells and whistles on everything. I sort of record my stuff and then leave, I don’t like to micro–manage him whilst he is doing his thing. 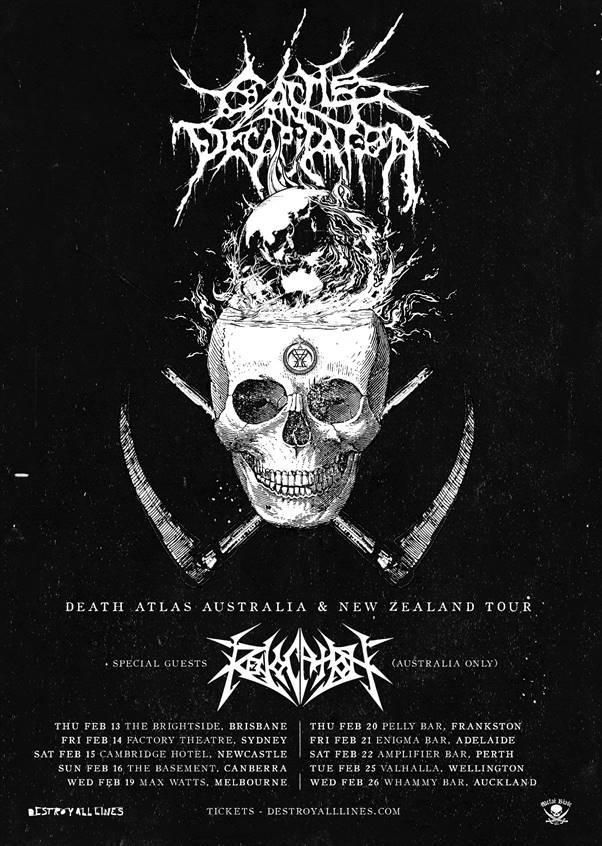