After almost thirty years in the music scene, Superheist guitarist and founder dw Norton just released his first solo effort under the name Rifleman. Featuring a very different side to his talents than he’s displayed in other projects, Silver and Gold comes after three years of writing and a lifetime of procrastinating on such a project, as Norton tells us below.

Why has it taken so long for you to finally release a solo album?
It all comes down to confidence. I’ve been thinking about it for a long time, but it’s taken me this long to really sit down and have the guts to do it. It’s a big thing. I’ve never been a lead singer before. I did write and record a solo album in 2004 right after Superheist took a break for the first time, but I only put a couple of songs on compilations and didn’t release the album. That was through a lack of confidence. This time around, I’ve spent a good three years putting it all together, I probably had 40 songs to choose from for the album, and I’ve just got a lot better at getting it sound the way I’ve wanted it to sound.

It can be hard for instrumentalists to find their singing voice. Are you happy with it now?
I’m happy now. You’re never fully happy. There’s always room for improvement, but I can certainly listen to it without cringing. It sounds good to listen to and the feedback I’ve gotten from others is promising. So in that regard, I’m pretty happy with it.

You’re very well known as a producer as well as a musician. Do you look at your own music the same way as you would look at another artist’s material when you’re producing?
Probably even more so. I guess that’s why it’s taken me so long to do mine. I’ll have songs that will live with me for a while and they’ll keep progressing or they’ll fall by the wayside.  40 songs just for this album alone. There was probably other songs I could have used but maybe the tone of my voice wasn’t right, or some tiny thing. I’m pretty strict on it. Even while it’s being mastered and manufactured now, I’ve got a hard copy here and there’s a few changes I wouldn’t mind making, but you’ve got to let it go sooner or later.

40 songs sounds like a mindblowing amoung of material to wade through to me. What was the criteria for making it onto the album?
I wanted to make sure there was a sound to the album as well. There were some songs they may have had a different feel to them or something and I wanted to keep a consistent flow of soundscape and I guess emotion and sentiment, so that the whole album is reflective of a certain mood and sound. There are others songs that I’ve got that may be more upbeat or a bit heavier that didn’t suit, so it was all about getting consistency across the record.

Rifleman sounds quite different to Superheist. Was it important to make that distinction?
It’s important but it wasn’t something that I deliberately tried to do. I certainly didn’t set out to make a record that sounded like Superheist – there’d be no point to that. In Superheist, Zeke sings and does a magnificent job and that’s not something I’m out to replace. Superheist is still a work in progress. Rifleman is purely reflective of my more rock influences, and not my metal ones. I love bands like Jimmy Eat World and Depeche Mode… the scene setters. More rock bands, whereas Superheist’s more influenced by metal and hip hop, which I also love. So it was good to be able to show that side of what I’m influenced by and what I’m into as well. It was good to be able to do that, and I’m definitely a big 80s pop/rock fan. If you’re into 80s pop and rock, you’ll find a lot of influence in there as well.

Ever since the mid-90s there seems to have been some kind of stigma or embarrassment attached to being a fan of 80s music.
You certainly can’t be embarrassed about bands like Midnight Oil, Spy vs Spy, all those great Oz pub rock bands.  It’s just brilliant. There’s nothing like it in the world. That’s where I’m drawing a lot of my influences from. Spy vs. Spy was one of my favourite bands. Back when I was around 18, 19 and growing up there were bands like the Choirboys, and the Angels, of course! When I was in high school I would go to Blue Light Discos and the Angels would be playing. That’s what I grew up listening to and wanting to be like that. I don’t think there’s so much… I’m not saying it sounds like The Angels or Rose Tattoo or anything like that, but that 80s rock is really in my DNA.

The launch tour is only a small number of shows.
I’m a little bit older now and I have a family and I obviously can’t do too much, and I do Superheist as well so I want to keep a lid on it. But we’re playing a free show which is the album launch at Penny Black in Brunswick. I’m going to invite all my friends and family down, but it’s almost like my first gig. I feel like it’s my first ever gig! And I never get nervous – with Superheist, I never get nervoud. I remember waiting to go on at the Big Day Out, 25000 people chanting ‘Superheist!’ at the top of their voice. Not nervous, just keen. But now because I guess I’m a little bit more exposed as the frontman, I’ve been practising learning the lyrics and playing and singing. It’s a whole new ballgame, so I’m a little bit nervous, I suppose!

After the first show, you’ll probably be fine!
Oh I think so. The hardest thing for me? There’s something wrong with my brain. I can never remember lyrics. Even my most favourite song of all time, I just can’t concentrate long enough to remember to sing the words. I’ve never really focused on that before, so for me remembering lyris has been the hardest part. I’ve got these huge lyrics sheets printed out and I’ve been singing along in the car so that I can try and remember them. I’ll see how I go. Hopefully I won’t balls it up too much! 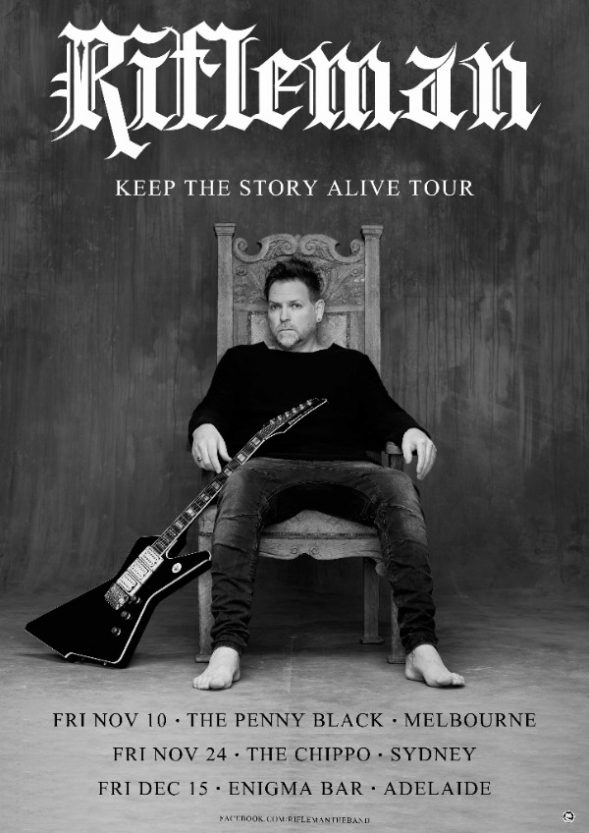