With two previous albums and a brace of EPs behind them, Pennsylvania’s Rivers of Nihil have come to wider world attention following the release of last year’s third full-length Where Owls Know My Name. The album saw the expansion of their progressive death metal sound with longer, more sprawling compositions and the addition of outside instrumentation like trumpets and sax deepening their creative palette. Next week the band will be in Australia taking part in Ne Obliviscaris’ Painted Progression tour along with Caligula’s Horse, Allegaeon and Beyond Creation so we took the time to get bassist and vocalist Adam Biggs on the line.

Your latest album is really how we discovered your band, so we’re really looking forward to seeing you here next week.
We’re really excited to be coming down there. It feels pretty surreal to be going that far away from home to play music.

Have you done a lot of touring outside the States?
We’ve been to Europe a couple of times, and Canada. That’s about it. Europe’s as far as we’ve been until this point.

How familiar are you with the other bands on the bill?
The bands I haven’t met personally I’m still a big fan of. Caligula’s Horse and Ne O are always in constant rotation for me and Allegeon and Beyond Creation, we’ve toured with them at different points. Beyond Creation, a good handful of times as a matter of fact, so we’re excited to go down there with some old friends.

When did you decide that your music needed some saxophone?
Well, a friend of ours is a really good sax player. When we were writing the album there was never any intention of having some saxophone on it, but we sent him a demo of the new music and asked him what he thought of it, and then he sent us a video of him playing over it. It blew our minds immediately. We had a little internal conference asking, ‘Do we know any other metal bands that use saxophone before?’ We didn’t want to seem trite, but it just sounded so cool to us and the playing was so good, we had to utilise it. As we got deeper into writing there was just more and more opportunity for it.

maudlin of the Well used an entire brass section at one point, but that was many years ago. It just seems to be such an under-rated instrument as far as metal goes. Even though it isn’t used all that often, when it is, it just seems to work.
It’s a great all-round instrument. I grew up with a lot of late-80s, early 90s pop music and progressive music like King Crimson and Pink Floyd, things of that nature, and all of that incorporates saxophone at some level. Nobody ever bats an eye at that kind of thing. Then when a metal band decides to change up the norm a little bit… I love double bass and electric guitars as much as the next guy, but I like more music than that. And I think that’s a general feeling for the whole band. We want to incorporate some more outside elements.

Are there things that you’ve thought about doing with your music that you haven’t yet done?
Yes! There’s plenty of new ground to cover I think, and we’re currently working on that. I can’t really say for sure what those things will be or it will spoil the surprise. Also, I don’t know how it will turn out so I could just totally blow it for myself!

How productive a band is Rivers of Nihil? Do you have periods where you are working on songs and then nothing for a while or are you a band that it constantly writing?
Well the work ethic of the band has changed dramatically since the last album came out. We’re touring way, way more than we ever have before. Everything up until this point has been somewhat leisurely. We always had the time to do whatever we wanted because we weren’t that much in demand. But now we’re kind of trying to balance our lives a little bit now so we can get to a point where we can comfortably write and tour, and rest when we need to. We’re getting there. We’re just sort of figuring it out as we go along.

Where Owls Know My Name has been a breakthrough release for you. When you look back on it now, what are your thoughts on it. Was there something that didn’t come off as expected or something that worked better than you thought?
It is interesting because there are things that I immediately listen for on the record, and I think that’s the same for most people putting out any kind of art really. You’re going to look back and you’re going to wish you did something differently. I know I definitely feel that way, but it just gives you inspiration to do things differently in the future, or make those improvements when you can. Especially for us, that came to the forefront on this last tour we just did where we played the whole album from front to back on stage. In front of people, watching their reactions in real time has given us a totally different perspective about what people really enjoy about the record and what things didn’t work as well. So we have that perspective now.

Did you find it a particular challenge to play the whole album live?
For sure it wasn’t easy. There was plenty of stuff that fell squarely outside our comfort zone for Rivers of Nihil as a live entity. There was a lot of more sombre moments mixed with your typical circle pitty type stuff, which was a really interesting thing. It’s hard to say exactly what we’re going to take away from it and change for next time, but we have that data now. 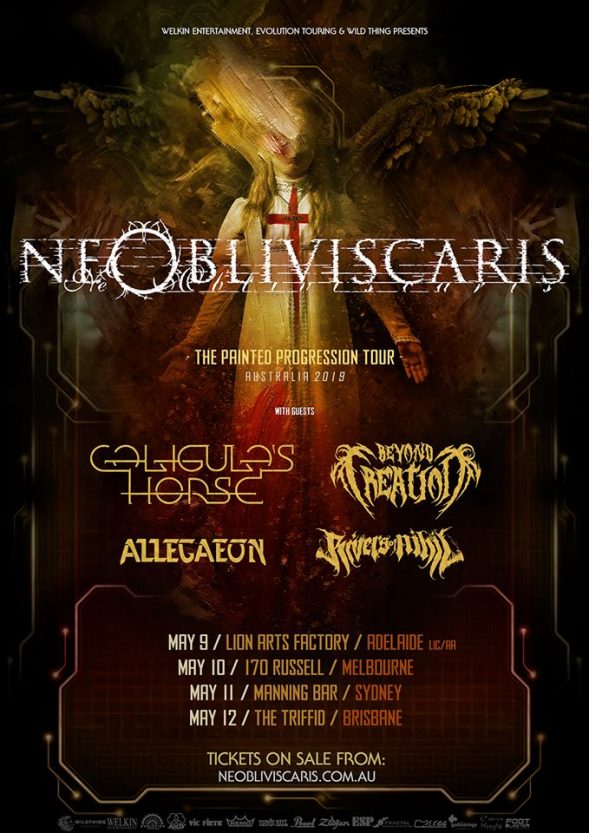