Day one in Brisbane for the Rock & Roll Writers Festival and I’m met at the airport by Loud Online’s most recent recruit, Dan “Southy” Southall, a man I have known from web-based interaction for something like 15 years but have now just met in person for the first time. 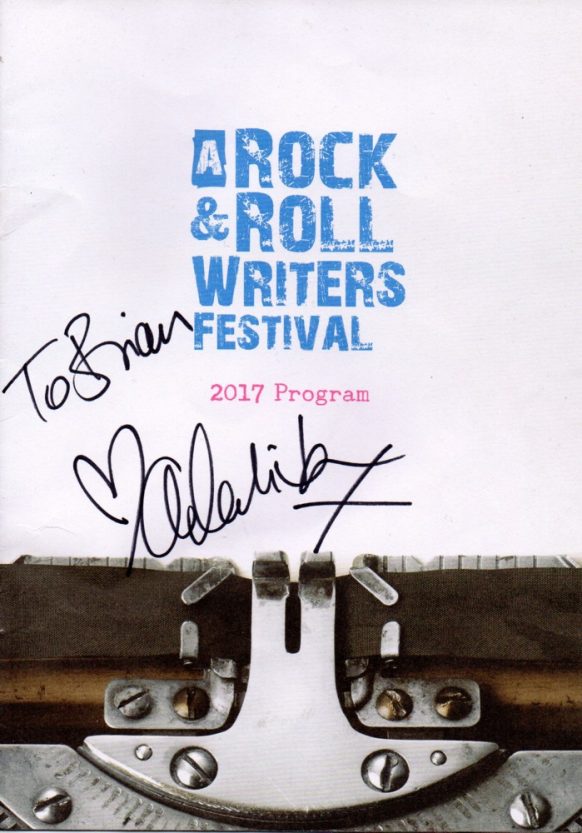 He’s a gruff, stocky, tattoo-festooned dude who drives a huge van that would be perfect for either a decent band PA or a pile of bodies and he takes me on a circuitous route to his place in the suburbs that seems to take the best part of a day to reach. This will be my digs for the weekend because, as a rock writer, I can’t afford to stay anywhere else. I also have to get buses everywhere, which from Southy’s isn’t the easiest gig in the world so after a quick thanks for being a decent bloke, I’m heading off to the Old Museum, Bowen Hills.

Finally, after what seemed like a lifetime of travelling from south to north and then north again, I have arrived at the venue, a delightful old building overlooking the showground in Bowen Hills. Here for the next two days I can be immersed in the two intellectual pursuits that amount to a life-long obsession: writing and rock n roll. Soon, the rigours of the road were washed away, and not just by the wonderful products of the Temple Brewing Co. The discussion panels are intimate, engaging, funny, spellbinding. They are everything one expects from creatives who are devoted to storytelling.

By 2pm I felt like I was listening to an internal monologue as I sit in the front row of the audience nodding and grinning while music critics Iain Shedden, Michael Dwyer, Sosefina Fuamoli and Larry Heath validate and confirm every notion I have ever entertained about music journalism. The reasons we get into it in the first place, the degradation of the art by the plethora of hack bloggers with poor writing skills, the true role of music criticism. “The role of music journalism,” says Rolling Stone’s Dwyer, “is to continue the conversation the artist started.” Poetry and wisdom. I nearly cried.

There are other great moment throughout the afternoon as Tim Rogers, Adalita and rock biographer Holly George-Warren bounce anecdotes off each other in a discussion on rock myth making and the role of sex, a topic that surfaces throughout the event. Social worker Matt Noffs talks about the stupidity of drug prohibition, novelist Nick Earls regales the crowd with tales about growing up in Northern Ireland. In between, there’s time to catch up with the panellists and pick their brains ever further.

That evening I leave on an intellectual high, to brave the expanse of the Brisbane greater city area once again. Getting as far as the CBD, I manage to leave my wallet on a bus. The local constabulary don’t even blink as I waltz into their booth on Adelaide St, plug my almost-dead phone into the wall and start calling numbers, thankful that Brisbane Council at least makes the attempt at being the modern city it claims to be when I can get through to someone at 7pm on a Saturday night, track down the bus and have the driver return my billfold intact to me just over an hour later.

It’s a strange stroke of luck that anyone wants to have when they’re alone in a different city, and it means I can come back to the festival tomorrow, which I do, navigating the transport system in enough time to see the last half of the first talk in which two of the country’s best photographers Sophie Howarth and Tony Mott trade yarns about the dumb things record labels have wanted them to do with their subjects, and then not doing them. Because they were dumb.

Once again, it was a mesmerising day.  Hugo Race made deeply salient points about the subjective nature of truth during his panel appearance about memoirs, there was laughter and emotion during the songwriters’ forum with Cash Savage, Adalita and the very entertaining, self-deprecating Mike Noga. The final discussion of the day, on scenes, sub-cultures and cultural movement shifts and headed by Rolling Stone’s Rod Yates, could have gone on all night as far as I was concerned.

For a writer such as myself, constantly absorbed in words and music, this was as close to perfect an inspirational environment as I could have found myself in, but anyone even remotely interested in writing and rock would have been just as enthralled. The independent nature of the festival meant the crowds were strong but not overwhelming, giving interested punters such as myself plenty of time to access the speakers between forums without the need for snaking queues and just enough time for a ten-second handshake. Afterwards I managed to grab a few moments with organiser Leanne de Souza who laid out her plans for the next few years of the fest. With luck and funding, there are big things to come for A Rock & Roll Writers Festival. I will certainly be there next time.