Ross the Boss: Hail to the King

Home > Features > Ross the Boss: Hail to the King

Manowar. Just the name itself inspires an almost Biblical reverence from their legion of dedicated fans who see them as champions of the ‘true’ metal ideal. Their leather- (and sometimes fur-) clad stage costumes, musical bombast and lyrical exploration of battle themes and metal pride helped to lay the foundation for metal into the late 80s and beyond, directly influencing the power metal genre that continues to carry the flag for Manowar almost forty years after their first appearance.

The band’s founding member, guitarist Ross the Boss, is quick to acknowledge the impact Manowar made and the legacy they created.

“I hear Manowar in so many bands I listen to,” he says from his home in New York. “There’s a whole generation of bands – HammerFall, Blind Guardian, Sabaton… all these bands are the children of Manowar! It’s a great honour for me.”

It also appears to greatly humble him.

“I don’t know what to say,” he continues. “It’s hard to describe my feelings of satisfaction, hearing that people are loving it so many years after it was done is just great.”

As guitarist with French band Shakin’ Street in 1980, Ross formed Manowar while touring Britain with Black Sabbath after he was introduced by Joey DeMaio by Ronnie James Dio. That Dio was instrumental in the foundation of a band that became so important in the development of heavy metal seems fitting.

“Ronnie befriended us and he became a real fan of mine,” Ross explains. “He said, ‘I like your playing and I like your look and I have a guy on my crew called Joey DeMaio. He plays bass and he’d work really well with you.’ And I just remember jamming with Joey in Black Sabbath’s dressing room while they were playing. It was very exciting. We would be in there every night, playing and playing, and one day somebody said ‘What’s going on in there?’ and Ronnie would say ‘That’s just Ross and Joey.’ They really loved us.”

“We didn’t think anything of it at the time. We just wanted to form a heavy band because we loved Black Sabbath, Led Zeppelin, Grand Funk Railroad. So that’s what we were doing. We didn’t know what we had started. We didn’t know that we were the creators of something. We were doing something that we knew was different. We didn’t realise that they would call it ‘power metal’.”

Ross recorded six albums with Manowar before he parted ways with them in 1988 following the release of Kings of Metal. Since then, Ross has been involved in a myriad of projects and bands, including a semi-reunion of the Dictators, Manitoba’s Wild Kingdom, plus the Brain Surgeons with Albert Bouchard from Blue Öyster Cult, Death Dealer and his own solo band, among others. His third solo album By Blood Sworn will be released on April 20, just in time for the man’s first ever trip to Australia. The focus of the tour, however, will be his work with Manowar.

“We will be performing a classic Manowar set of the best songs from that era, 1982 to 88, the first six records,” he says with some authority. “And the way we have been doing this is extreme old school, strip it down, no bullshit. There’s no solos, no talking – very little talking, no tapes, no special effects. There’s nothing but pure unadulterated metal. Just precision from an incredible band and an amazing singer.”

Manowar has never toured Australia, so for devoted fans and curious newbies Ross the Boss is as close as it may ever get. Few could argue – this is the man who originally wrote and recorded the overblown metal epics that have weathered the tests of time. He’s very proud of the legacy, and super keen to be able to perform it in Australia at long last.

“‘Dark Avenger’, ‘Shellshock’, ‘Manowar’, ‘Each Dawn I Die’, ‘Gloves of Metal’, ‘The Oath’, ‘Kings of Metal, ‘Hail and Kill’. Songs like that, I’m really proud of them,” he declares. People love them, and we play them, so we are extremely excited.” 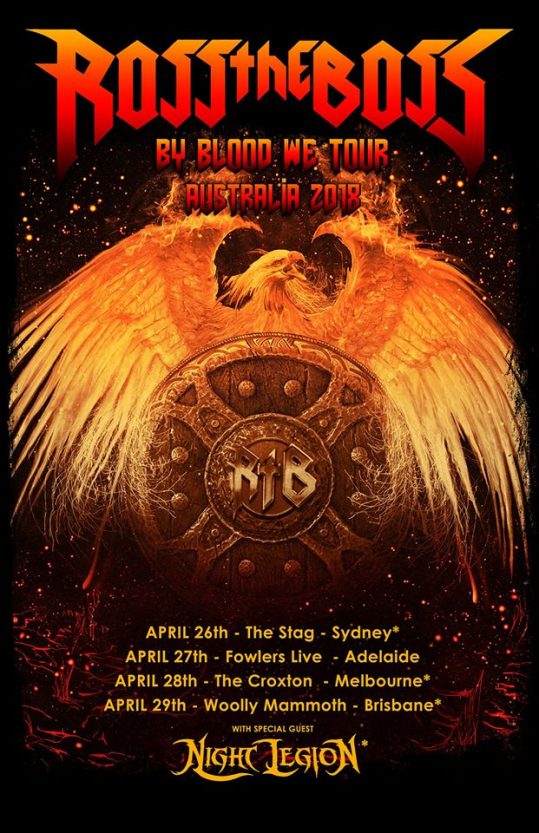