Three years after alternative metal powerhouse Sevendust hit our shores in 2016, singer Lajon Witherspoon says the group are ecstatic to be returning for another national tour next month. Speaking from his home in Kansas, Lajon is fortunate to be spending some well earned family time after getting off a six week US tour with Alter Bridge side project Tremonti recently.

“We have to re-energise, we have to be home and be daddies, go to daddy-daughter dances, take the trash out, and wash the dishes,” he explains, but he assures me that Sevendust always have a beautiful time in Australia and that it’s a pleasure to be able to come back so soon.

Due to all five band members being spread around America, with drummer Morgan Rose and bassist Vinnie Hornsby in Georgia, guitarist John Connolly in Florida and lead guitarist Clint Lowery in Saint Lewis, anticipated interstate reunions never fail to reignite the sense of excitement and camaraderie that shows and tours had for the band back in the 90s, a sense of unity that is reflected in the attitude of faithful fans.

“Sometimes the kids will be [waiting for us] at the airports, we get there and they have signs, flags and posters and it’s amazing,” says the 46 year old singer. “It really makes you feel like you’re doing something right in this industry.”

Sevendust are also anticipating a May tour with In This Moment, Light The Torch and Hyde, that will take place across America after touring Australia next month with Redhook and playing in Auckland with City Of Souls.

In leading up to the Australian April tour, Witherspoon reveals that Sevendust will also be commencing writing sessions for the follow up release to last year’s All I See Is War, which spawned new singles ‘Unforgiven’ and ‘Dirty’.

“We’re going to get our feet wet a little bit and figure out a direction, Morgan, John and I will start and we’ll lock up in a studio for three or four days and see what we come up with, and then we’ll do the same with Clint later. The writing process is about to start right now, John’s actually sent me four songs already so it’s exciting.”

In the face of long travel times to see fellow band members, the reality of being in a Grammy-nominated, triple gold record certified metal act ensures that Sevendust make time to meet up and create while at home, while even finding time to write while out on the road.

“Everyone brings out their little rigs so they can write, so there’s always something going on with music,”  Witherspoon says.

In this new century, individual musicians can also be as prolific in home studios as within a full band setting by sharing new music online, and Sevendust are no exception.

Witherspoon also makes the effort to assure local fans that Australia has a firm place in the hearts of his band, viewing dates on the upcoming tour as nights of musical healing instead of shows, with many audience members as important as family.

“You guys down here have definitely grown a beautiful relationship with me in my heart and mind,” he says.

Although Sevendust have not been to Australia often, the April tour guarantees the group are as excited as possible to be returning, with a chance to reconnect with friendships formed on previous runs. As far as the setlist goes, audience reactions to recent singles have been as positive as when throwing it down to older 90s hits like ‘Denial’ and ‘Waffle’, with a lot of back catalogue in place to compile a powerful show. Exceptions are naturally made for rare novelty tracks and B-sides, Witherspoon says with a laugh.

At the end of the day, the freedom to pick and choose material always allows for a good time when Sevendust hit the road, with a chance to re-energise guaranteeing a string of dynamic and memorable shows in a country that has proved so hospitable for the group.

“It’s a family reunion when we come to town,” says Lajon, closing the interview. “I can’t wait to see you.” 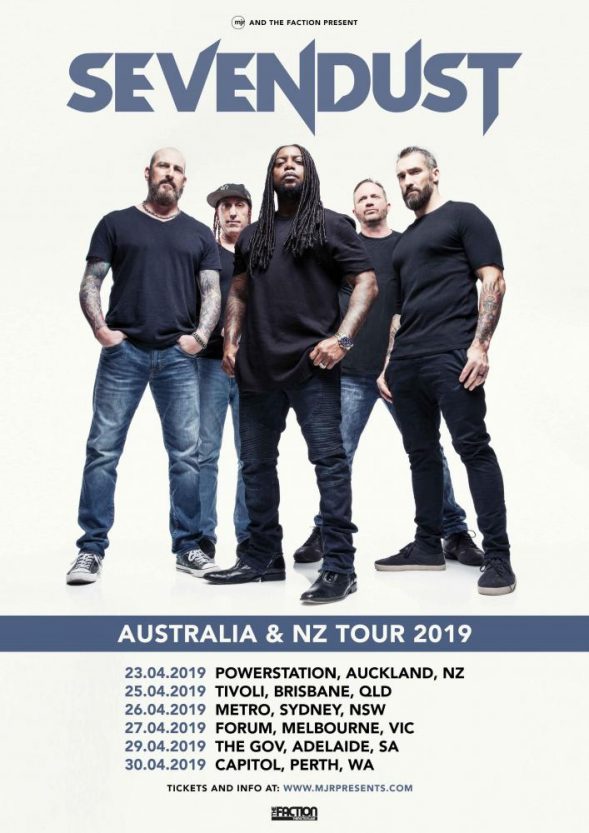