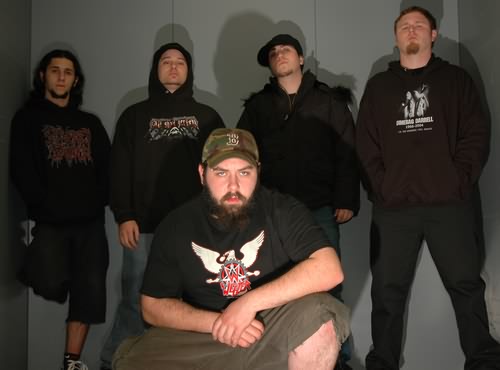 All Shall Perish: Bringing on the End

Home > Features > All Shall Perish: Bringing on the End

Latest release: This is Where it Ends (Nuclear Blast/Riot!)
Website: www.allshallperish.com
All Shall Perish bassist Mike Tiner offers a chuckle as I apologise for calling him an hour or so after the interview schedule. I had originally been trying to ring guitarist Ben Orum but his phone was diverting straight to his voicemail.

“We’ve had a little bit of a problem with him doing that,” Tiner says, “but I’m cool to do it.”

Currently on tour in Australia, All Shall Perish is in the middle of perhaps their most successful album cycle to date. Four albums into their career, the politically-minded quintet has reached a high point with This is Where it Ends, a diverse and thought-provoking release that has seen them bust into the Billboard Top 50 and tour the US with the Mayhem Festival.

Often touted as one of the leading acts of the dreaded ‘deathcore’ movement, scratching below the surface finds a band with a musical oeuvre of considerable depth, not to mention a political acumen in their lyrics that goes way beyond deathcore’s typically senseless violent rantings. Tiner agrees with the suggestion that sometimes pigeonholing is just a way for people to justify something they don’t necessarily like.

“Oh yeah dude, it makes it so much easier just to label someone so you can pass it off,” he says, “’Oh I don’t like that kind of band, so I’m gonna call it deathcore’. Like, I’m not too much of a fan of progressive metal. I like Animals as Leaders, I like Opeth, I love Death, but by and large that entire genre is just like… I can’t do it. So whenever I hear anything that’s kinda odd timing or something that I wouldn’t have done like that, I’m just, well… it’s prog and I’m done.

“Even I do it,” he admits. “I don’t mean to do it. Everybody likes to label stuff, and that’s the worst mistake you could make with our band. By hearing one song and labelling us that. Because if you hear a metalcore song from us, you’re gonna think we’re metalcore and that’s the end of it. And that’s what a lot of bands do. They play one style, stick with it and play it til no one listens to them anymore. If you hear a death metal song with breakdowns from us, you’ll label us deathcore. And it’s like that across the board for everyone.”

With the entire deathcore thing appearing to be on the brink of faltering, through a combination of growing disinterest and genre overcrowding, Tiner finds some amusement in the way that new bands coming through at the verge of the scene are now taking it upon themselves to come up with fresh categories for themselves.

“’Oh we’re not deathcore. Deathcore’s old. Deathcore’s on the way out. We’re now djent!’” Tiner says of the way some more recent acts are labelling themselves, with a laugh. “That’s the new one I keep hearing. Like After the Burial… there’s so many bands like that. Who’s that other one, Periphery? It’s like, yeah cool, you’re giving yourself a new name. But is your music good? That’s the only thing that our band cares about. Is the music good?”

This is Where it Ends certainly mixes things up in terms of musical delivery, but All Shall Perish has never been a band that has ridden the same thing into the ground like so many of their contemporaries. The album runs the gamut of modern extreme metal without bogging down in the one style.

“We just do what we do and we all like all types of music and sometimes it’ll even come across a little proggy in some parts!” He chuckles again, acknowledging the irony of his previous comments. “But we do it because it sounds good. We vary it a lot.”

All Shall Perish is known for the forthright political views presented in their lyrics. With the dawning of the Arab Spring and the proliferate Occupy protests this year, I ask Tiner for his thoughts on those events and if there might be an inspiration there for future lyrics.

“I might be the exact wrong person to ask on that one!” he admits with a laugh. “I myself have never written a single lyric for this band ever. I can’t really speak for our lyrics. So if you’re asking me personally, I have a very view different than a lot of the lyrics. I really don’t think there’s much organisation to any of the Occupy anything. People just like to get into groups and be angry about things. They don’t really seem to be doing anything other than making the news because someone threw something at a cop or a cop shot someone with a rubber bullet. It doesn’t seem to be doing much other than to just be a spectacle. That’s my opinion, but at the same time I know there are many, many problems in the world that need to be solved. I don’t really know if they are going about it the right way.”

According to Tiner, when it comes to political affliation, individual members of the band go “from fairly conservative to fairly liberal and then in the middle and on the outside to like, I don’t care, don’t talk to me about that at all”. With the departure last year of drummer Matt Kuykendall, This is Where it Ends‘ lyrics became the sole responsibility of vocalist Hernan “Eddie” Hermida.

“This is the first album where Eddie’s been able to write the lyrics completely on his own. On previous albums Matt has always been there to help him write and they wrote together for the most part on the two albums that Eddie was on. And past that it was Matt who wrote the first album. This album Eddie wrote completely on his own, so everything you see is completely outta him,” Tiner explains. “That makes it a little hard for me to summarise what it is that he was thinking.”

The name of the album caused some confusion and consternation, as many inferred that it meant this would be the band’s final statement. Tiner explains that while it certainly is a statement, This is Where it Ends is far from being the last we’ll hear from All Shall Perish.

“It’s definitely not going to be the last album,” he says. “We already started on writing new stuff for the new one. What we were going for with the title is that there are certain parts of the music business that are just completely corrupt and terrible. Certain parts of any types of politics – I’m sure you guys run into it down there, we certainly run into it here – there are just so many bullshit aspects, so many games that people play. It’s just us saying we’re done with that. We’re done with all the bullshit, and it’s time to go your own way. Don’t follow the group. Be your own person.”