sleepmakes waves: More Than a Breath

Latest release: Made of Breath Only (Art as Catharsis)Website: www.sleepmakeswaves.com

To say that Sydney instrumentalists sleepmakeswaves have had a huge year would be understating things. The band has barely been able to keep still since recording third album Made of Breath Only earlier this year, and in two weeks they begin another Australian tour, this time with Rosetta in tow. Guitarist Otto Wicks-Green somehow managed to find fifteen minutes to talk to us about how hectic 2017 has been for them, how much he is enjoying playing full-time in his band, and being roughed up by Taylor Swift’s bodyguard.

You have a tour coming up with Rosetta very soon, but it has really been a very busy year for SMW already.
It’s been a whirlwind year. It’s been chaos. We did the new album back in March, and we were already two tour in when we released the album. We recorded it, then we went on tour with Underoath, then we went to China, and then we got the record out, and then we toured Australia. It went on from there. On and on and on. We did more tours with Devin Townsend, a couple of shows here and there, and then we went to Europe and then BIGSOUND in Brisbane…

Am I correct in saying that you’ve been nominated for an ARIA once again?
Yeah, our third nomination. So we’re three for three. It’s pretty great, to be honest. I was in Manchester at someone’s house and I got onto their wifi network when the news came through, and I was really stoked, because we don’t do this for industry approval or accolades. We write this music because that’s the music we want to write, but getting that kind of recognition at such a high level is a big honour. It’s massively flattering for us.

A lot people don’t necessarily know where the votes come from in the ARIAs. It’s industry wide. It’s musicians, it’s publishers, it’s publicists, it’s labels – so just to get to the final five – that final cut – is huge recognition.
Knowing how bands are chosen, to have that much good will is really lovely. I don’t really feel like we belong at an awards show but we’ll have fun and make the most of it. We don’t think we’ll be coming home with a little pointed statue but we’ll go along and see a few rad bands performing and get amongst the industry-ness of it all!

It’s also one of those nights where you may come into contact with someone from the industry that you might not meet ordinarily.
I came so close to meeting Taylor Swift. I must say it was one of my biggest regrets that I didn’t plan my approach more strategically, so I wouldn’t be mercilessly turfed out by one of her very large bodyguards.

Have you had the time to stop and think much about how things have been going for sleepmakeswaves? You have been so busy, especially for a band that is so unconventional. It’s been remarkable.
It’s been cool because this year and parts of last year has been the first time I’ve actually been able to quit the day job and do this full time, which has been the goal for this band. That’s all I’ve really wanted, to be a full-time muso and in this day and age, in Australia, that’s really hard. Everywhere it’s really hard! People put less of a price on music, it’s less valued overall in terms of CDs being bought and all that type of thing. So getting to be able to do this full time has really enabled me to be able to take those opportunities where they have been and appreciate how far we’ve come. It’s also been able to help us do all this stuff we’ve done, because it’s been a really ruthless year in terms of a schedule and I don’t think it would have been possible had we all had to lock down full time jobs. Some of us work part-time now and some of us are freelancing with this band and other projects. Even though it’s been a very busy year, it’s been cool to be able to do it as a job, without other obligations around it.

How do you think this tour is going to compare with the other shows you’ve done this year?
We made a couple of decisions early on to scale things down and take things back to a place somewhere early on in the band’s history. The last few years have been focused on scaling up, venues and production. So after we played the Metro earlier this year, for the album launch, we started to think about how to make the next round of touring really interesting and to keep people interested in the band, and we decided that rather than try to scale things up, we’d do the opposite and go back to hot, intimate clubs. This band was inspired by bands like At the Drive-in, Converge, and those hardcore bands that provided a really energetic live show. I think the smaller stages, where the audience is right in your face, and you’re in theirs, and the noise is all around you, that is the ideal kind of space to experience sleepmakeswaves on some level. And bringing out a band that is so suited to that type of context is the real icing on the cake for this tour. Rosetta are getting to perform in these rooms that I feel are perfect for Rosetta, so I think this is a really strong line-up and a really exciting tour for us, because it’s going to be a bit different, a bit more intense. And we can’t wait, because this is what we want to do. Play sweet rock shows in front of screaming people.

It really doesn’t matter if your band doesn’t have any vocals. People still want to rock out and a small intimate crowd is where you feed off that energy, isn’t it?
It’ll be much more visceral for us, much more in our face. And I think that the big rooms are cool and we’ve been able to stretch the edges of what this band can deliver live, and I think that’s been a wonderful exercise in creativity and our imaginations. But this is our comfort zone. This is where we started. This is where we honed this live show. This is what that live show is meant for, stages like this. It’s going to be a lot of fun.

I’m not sure I can ask you what’s been the highlight for your career because you’ve done so many things now, but what has been the highlight for 2017?
I think broadly speaking, the highlight is being able to do this full time and actually having this as my job. That’s a personal thing that’s been a highlight. But in terms of the shows and the experiences we’ve had this year, there’s a couple of things that come to mind. The first is getting back to China for the second time. The audiences over there are just wonderful to perform for and even though we’re this kind of nerdy, niche-market hard rock band, over there we feel like Bon Jovi. It’s out of this world. We’ve played some of the best shows of our career in China. Beijing, Shanghai come to mind as real crackers. We had the time of our lives over there. The other thing that comes to mind is playing this festival in Bristol in England called ArcTanGent, which is just a stacked line-up with some of the more interesting artists in the world today. We played to about 3000 people in the mud in Somerset with some sheep in a nearby paddock probably hating themselves and wondering what the hell was going on. That was a lot of fun as well. 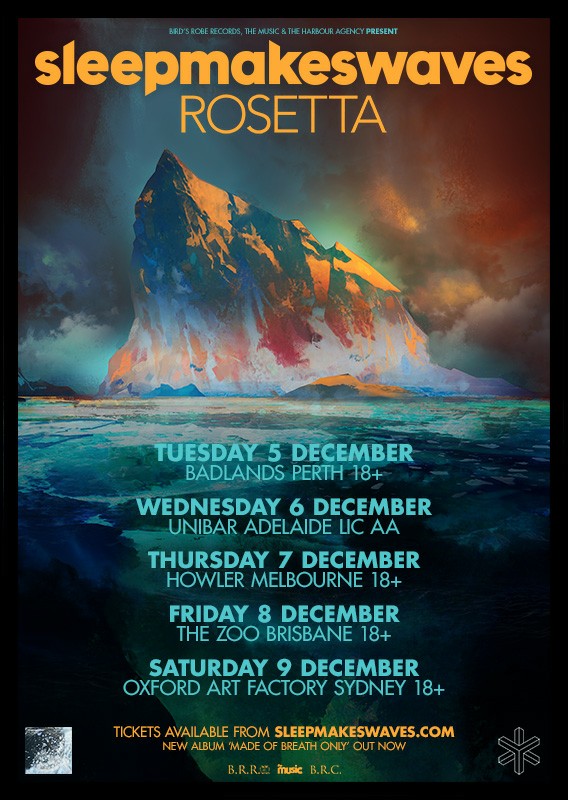