The Snow droppers: No More Prayers

For ten years The Snowdroppers have been blazing a trail of rock and roll mayhem around the country. After forming in 2007 to bash out some covers at a burlesque show, the band has stretched a decade-long career that is coming to an end in October following a final run of shows. With the end looming, we had a chat with vocalist Johnny Wishbone.

So tell me, what’s inspired you to pull the plug on the Snowdroppers?
Well mate I just think, why let it die after twelve years when we can shoot it in the head at ten? It our ten year anniversary, what better way than let it go out with a bang?

Blood Duster have just decided to split up, and The Beards are gone. All the good bands are breaking up!
Well, we’re all getting old! Everyone’s looking for some kind of controversy behind it, but it’s really just been a mutual thing where we thought it was time to put it to bed and move on to greener pastures.

That’s fair enough. So what do those greener pastures look like for you?
Oh, I led you a little bit there, because I don’t actually know the answer to that question! Something will pop up. I’m working on some solo stuff that I’m certain I’ll unveil at some point. I’m sure I’ll throw shit against a wall and see what sticks.

That’s pretty much how the Snowdroppers started in the first place isn’t it?|
Actually very much so – by chance. By chance is how the Snowdroppers got together. That’s why it will be interesting to see what happens from here on out. I really wish I could make it more interesting for people! There’s nothing really more to it than, Four Men in Thirties Don’t Want to be Poor Anymore! But really, it’s just time to lay it to rest.

Well you’ve had a pretty good run for a band that was only supposed to be together for a couple of gigs.
That’s very true! We were only supposed to do two gigs, and it slowly protracted out over ten years. And to be honest I think those first two gigs were the best I’d ever been paid.

Obviously you’ve done some pretty insane stuff over the last decade. Is there anything that sticks in your mind from that time that the Snowdroppers were responsible for?
That’s a corker of a question. There’s been so many ridiculous stories to mention. The history of this band has just been a comedy of errors. What actually sticks in my mind is not anything we were “responsible for”, but playing Bluesfest was definitely a highlight for all of us. To play to a crowd that size was literally jawdropping. That was really cool. If I dug deep I could probably find an anecdote worth relating, but yeah – it’s been a constant comedy of errors!

What was it that kept you going for that long?
Separate tour buses and separate rooms, I think! You know what? I don’t actually know. It’s been the same members the entire time. It’s actually a really, really, really good question. I don’t know. I think we’re all pretty respectful dudes, and we’re pretty respectful of each other. That’s not to say it’s always smooth sailing. It’s like a family. Like brothers, and you love your brother, but you know how to real shit your brother. You really know how to piss your brother off.  You know what buttons to press, and then you know when not to press a button. I think at the end of the day, we’re all… well, the other guys… are all pretty respectful. Knowing when not to push the button is what’s kept us going.

Some bands change personnel every time they go out on tour, so for a band at an underground level to keep the same people for ten years does make an interesting story.
It does, and I think a lot of it was just luck. How that luck has manifested is probably worth of debate, but I think we’re just lucky that all our personalities seem to mesh pretty well. There was some decent, healthy personalities. I’m sure you would probably get a little bit of a different story from other members of the band who aren’t the lead singer, but I think we just got lucky to be honest.

So even though you can’t say what you’re doing next, your musical days aren’t over.
No. I couldn’t see myself hanging up my boots completely. I don’t know what format it’s going to take. I’ve got another band going that’s my solo band, so maybe I’ll get that going. We haven’t really done anything yet so I’m sort of hesitant to go into too much detail. But I kind of realised, a couple of years back now, when you’re young and you’re in a band… I remember when I was young. Geez I sound like my dad now! There’s a pressure on you and you kind of want to be big! Be big and be a rock star and you’ve got a certain time, like an internal countdown timer, an internal clock that’s ticking. How long’s it going to take? So you think, I’ve gotta get this done by this time. We’ve got to tour and we’ve got to back it up with this, and we’ve got to write and we’ve got to record and get a single out and a video this time and tour with these guys because they’re popular at the moment and we’ve gotta keep doing this, because there’s a timeline.

Then a couple of years ago, I sort of realised… I’m a big Mark Lanegan fan, and I was reading an article with him and it made me realise that just because you get to a certain age it doesn’t mean you stop playing music and go and work in a bank. Just because you’re over 30… this is just what I do. I did a gig the other night and I was like, This is what I do. It’s where I’m happiest. Where I’m at my most spiritual, if you want to get a bit funky, a little hippy. Just because this door closes doesn’t mean all the doors close. I will always be doing something, but you suddenly take that pressure of time off yourself and the world is your oyster. 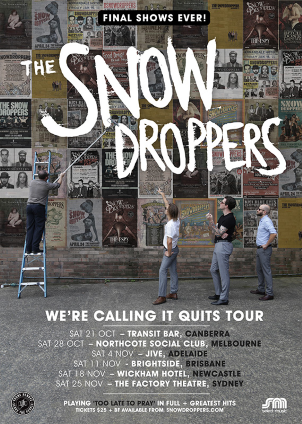