The Stooges: Live at Last 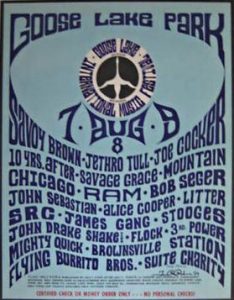 A revolving stage literally turned the acts around within seconds of the end of the previous set and the line-up certainly rivalled that of the fabled New York hippie-fest of the year before: Jethro Tull, Faces, Chicago, Ten Years After, the James Gang, Mountain and Lovin’ Spoonful’s John Sebastian, along with a host of Michigan artists like Bob Seger, the MC5 and Brownsville Station. While contemporary accounts suggest that the festival was an overall success, Goose Lake never achieved the notoriety of Woodstock or California’s disastrous Altamont Festival. A few photos and articles from Detroit newspapers exist, but the promoters’ zeal at restricting access to the music press means little about it was reported in the flagships of the time, and for most people outside the state of Michigan the three-day event has long since faded from rock and roll history. So it was probably doomed to remain, until the discovery five years ago of the only complete recording of a performance from Goose Lake, of perhaps the most unlikely band to be included on the event: The Stooges.

“No one knew about this,” says Ben Blackwell, Stooges tragic and co-founder of Third Man Records, who will release it as an album this month. “There’s an aborted documentary about Goose Lake where there’s maybe sixty seconds of The Stooges playing, and the footage is pretty much just Iggy. You don’t really see the band playing, maybe for a second or two… but no one knew about this. If anyone knew about this, they would have tracked it down and done something with it. It was literally unknown for almost 50 years.”

Found in the ancestral home of sound engineer Jim Castley, by some sort of miracle it was the only viable recording in a box of tapes from the festival. Castley died in 2005, without ever telling anyone about them, why they were recorded or even if it was him who made them.

“If you had the opportunity to hear any of the other live recordings from the festival,” Blackwell says, “it’s hit or miss. Even the fact that it was recorded is great; the fact that it recorded well is even more luck of the draw, because everything else seems to be hit or miss. There’s no real way to tell why something got recorded well or badly. We couldn’t really figure out what this source audio was meant for. It’s a two-track, quarter-inch tape, it’s not stereo and it’s not evenly distributed between the two channels. It’s super overloaded in one of the channels. So, it doesn’t seem like it was recorded for the film. There’s so many questions that we’ll never have the answers to.”

The Stooges’ appearance at Goose Lake remains remarkable for at least three significant reasons. First, it was perhaps the biggest audience they ever played to, in any of their incarnations. At least 200,000 people attended the weekend, more than six-and-a-half times the number expected.

“As far as I can tell, they never played anything bigger before or after. And that’s including, like, the Big Day Out, and there wasn’t that many people at those,” Blackwell says.

Secondly, it was the first time their hometown crowd would get to hear the forthcoming Fun House album played in full. Third, it was the final ever performance of the band’s original line-up. According to legend, bass player Dave Alexander was so nervous before the show, he fell off the wagon and got so intoxicated he could barely remember the songs. He was fired from the Stooges at the end of their set. While some sources suggest Alexander wasn’t playing at all, he can be heard – somewhat faintly – on songs like Loose and Dirt. The extensive liner notes that accompany the recording explain that Iggy Pop’s frustration with the hapless Alexander was partly the cause of his particularly manic performance that night: During “TV Eye,” Alexander fumbles and then briefly finds his place in the song, only to drop out again, read Jaan Uhelszki’s detailed notes. Something that still rankles Pop to this day. “There is no bass guitar on that song all the way through three verses and three choruses! A peculiar form to a vamp instrumental before a muted verse. The bottom [that you hear] is Ron. There is some kind of overtone from the bass amp that maybe makes it sound like there was a bass. There was no bass on that song!”

“There’s a really, really, really lacking recording from Soldiers Field in Chicago about a month prior to this Goose Lake recording, but it’s rough, man,” Blackwell goes on. “To find a recording of this quality, of this line-up… I struggle with over-hyping things. The Holy Grail? It’s up there. I’ll let other people decide what it is.”

Live at Goose Lake: August 8th 1970 is the only full-length live recording of the original Stooges. There are no other known significant live documents of any of their pre-Raw Power material.

“There are no live recordings of any of the songs off the first Stooges album,” Ben Blackwell says. “With the original line-up. There’s no I Wanna Be Your Dog, there’s no 1969, there’s no Little Doll. That’s crazy! “How is that the case?” He asks, with an exasperated tone. “When you look at the MC5 who were, in that scenario, much bigger… there’s dozens of live recordings of the MC5 from various stages of their career. From the first three years of the Stooges, there’s, maybe, three or four fragments, a song or two, and nothing from the first album. It kind of boggles the mind.”

Considering how unpopular The Stooges were at the time, reviled by both critics and fans alike despite being a major label act, it’s perhaps unsurprising that no one thought enough of them to capture them live, even with, or perhaps because of, their wild and unpredictable reputation. Iggy’s penchant for stage diving was so notorious, Goose Lake’s organisers built a wall and dug a moat in front of the stage just to stop him from doing it. But as Blackwell points out, it’s little short of a miracle they were recorded at all.

“We’re lucky that the Stooges ever ended up in a studio,” he says. “What Danny Field saw them doing when he signed up the MC5 and picked up the Stooges as an afterthought, they were so far from a polished or a clean band that anyone could have thought would sell or be marketable, but from that point to their first album, the growth and evolution they had is amazing. But that first album gives no indication that this band is going to be huge and people are going to love them.”

The Stooges was widely disavowed by contemporary music critics, and Fun House was only rated a little higher when it appeared in late August 1970. Neither record went higher than #138 on the Billboard chart. Over the prevailing decades, both albums have been cited as two of the greatest rock releases of all time. The Stooges are far from alone in that regard. AC/DC, for example, have never been the critics’ darlings. Their early forays into America garnered some of the worst reviews of any band at the time. Few took the Ramones seriously. Black Sabbath were rarely given the recognition they deserved until the early 90s, when grunge’s breakout bands whom the media fawned over kept bringing them up – along with The Stooges – as a major influence.

Ben Blackwell sees the recognition of real talent as a major part of his role.

“It’s like great music will ultimately come through. It will ultimately get it’s due. It may not be until all the band members die, it may not be that anyone makes a career or sees any lucrative returns on it, but that’s what keeps me going. To see great music get its due. And I think that my job at Third Man, and in the world, is trying to find that music that didn’t get its due and use the platform that I have – that we have – to try and share that with people.”

“This recording,” he continues, “could very easily have just ended up as an MP3 on YouTube that diehards would listen to and wax poetic about. But using our platform, let’s get it out there, let’s get it heard, because it deserves it, because it is important. Because it is an amazing document.”

So how exactly did this amazing document fall into the hands of Jack White’s record label, of all places? The guy who found it – Jim Castley’s son Josh Rogers – brought it to them.

“Back in 2015, Josh’s mum was selling the family house, that had been in the family for 170 years, and they were cleaning it out and he found a box of tapes that said Goose Lake on it! One of those tapes was of The Stooges. He didn’t know if there was music on it, or what, so he just reached out to Third Man and said, ‘Do you want to figure this out with me?’ He came to us, basically. He knew our reputation and he knew what we were capable of. So we took the ball from there and been running with it ever since.”

Half a century since that fateful night in Michigan, the only known album-length live recording of the original Stooges is about to hit the shelves. Live at Goose Lake: August 8th 1970 will be out this month on CD and various vinyl formats and, most importantly, the only surviving member of the band that played that night has given his approval.

“Iggy’s on board,” Blackwell asserts. “He’s signed off on it. …the Asheton estates, as well. Ron’s estate and Scott’s estate – everyone’s on board. That’s the right way to do it. If it sells, people will get paid, and that’s good too.”