This month’s Download Festival is bringing some illustrious bands to Australia, but there is probably no more storied and influential act on the bill than Suicidal Tendencies. Emerging from the west coast hardcore scene in the early 1980s, the band became one of America’s most influential underground acts when their crossover HC/thrash metal style crystalised on 1988’s How Can I Laugh Tomorrow When I Can’t Even Smile Today?

After almost forty years and close to 30 albums to his credit, frontman and mouthpiece Mike Muir is still a passionate and outspoken individual and his band’s most recent effort World Gone Mad is as insightful and as furious as they’ve ever been. For Muir, that passion is everything. Without it, the band would likely not be still around.

“If you don’t want to be somewhere,” he says, “don’t be there. My dad always told me that. With us, we want to be there. At any particular place, we’re there because we want to be there. We start off in NZ and then we do a festival before those Australian dates, and then we go to Japan. We were just in Japan, and we had a great time so we’re going back because we want to be there. We’re going to Cuba. Our drummer, Dave Lombardo, his family is from there. He left when he was two years old. Now we’re playing a gig there. It’s a great opportunity to do that. One by one, it’s like, ‘Wow, we’re getting a chance to do this!’ And the only way we can show our gratitude and appreciation is when we get on stage and to give everything that we got.”

Part of what keeps the feeling alive is being able to set their own agenda. Muir doesn’t feel it necessary to run the band into the ground year in and year out. These days, he says, they say no “to probably four out of five things”. It gives them time to devote to other things and avoid burn out.

“We have the opportunity to say no,” Muir says. “We’re saying no to things now that we would have loved to have done before but probably weren’t able to. It’s one of those things where there are certain limitations. If we toured 365 days of the year, it’s gonna take a toll and it’s not gonna work, so just because we can doesn’t mean we are going to do it. So when some guys are happy that they’ve got a tour because they have nothing else they love to do, I do. I have my family, I miss them when I’m on tour and they miss me – at least I hope so!”

He laughs. In fact, he laughs a great deal. He may be well known for outspoken views that have put him at odds with other members of the music community over the years and near-mythical spats with bands like Megadeth and Rage Against the Machine, but Mike Muir is jovial, upbeat and easy-going. Like many other bands with music rooted in hardcore, Suicidal Tendencies have always been about empowerment and the strength of the individual, of independence and the positive identity that can rise from struggle. To the one-time Gold Coast resident, ST is beyond a musical act, something more like a platform from which to transmit his message.

“Suicidals is a calling and an opportunity that’s different than just being a band,” he says.

“I never wanted to be a band”, he continues. “I have so many friends that are in bands who were like ‘I wanna be a rock star!’ I always hated rock stars. When I was starting off in punk rock there was no audience for it. It wasn’t a matter of doing something that you hoped people would like. You didn’t care if people liked it! It just mattered if you liked it. That’s the point that I try to get across to people. Find what you love and do the best at it. Don’t do someone else’s thing. And anybody that you admire and mimic, the reason you admire them is because they’re doing their own thing. You need to find your own thing.”

He views phenomena like the Kardashians as “unfortunate” and uses the shallowness of fame and celebrity to highlight his point.

“I say this to so many people: How many friends do you really have? When it all came down to it, when you needed someone you could really depend on? Probably not a lot. There’s not a lot of good people in the world. Good people live forever in the hearts of the world. We need a lot more good people than we need musicians, to be honest.”

Making people into good people, and good people into better ones, seems to be Mike Muir’s ultimate goal. Life isn’t always going to be fair, he reasons, but a lot of the time the bad stuff is only temporary. Finding the strength to move past it is important and inspirational.

“People just give up on themselves too quickly, and they accept the bullshit and that’s the sad  thing. Life’s not a fairy tale. It’s not meant to be. But you’ve gotta deal with it and get through, and get stronger, and hopefully help someone else in their time of need. Be their inspiration, and then when someone you care about needs help, they’ll be there for the right reason, because it’s the right thing to do.” 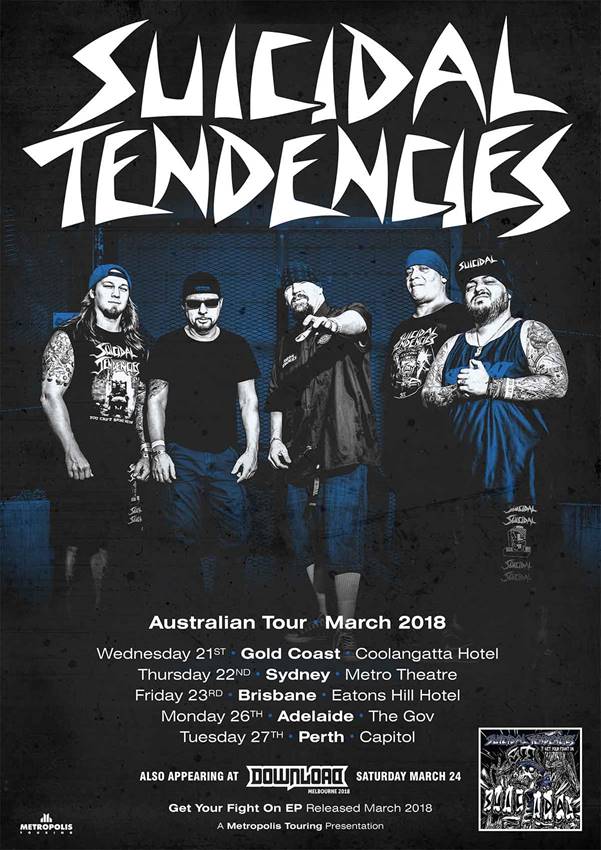